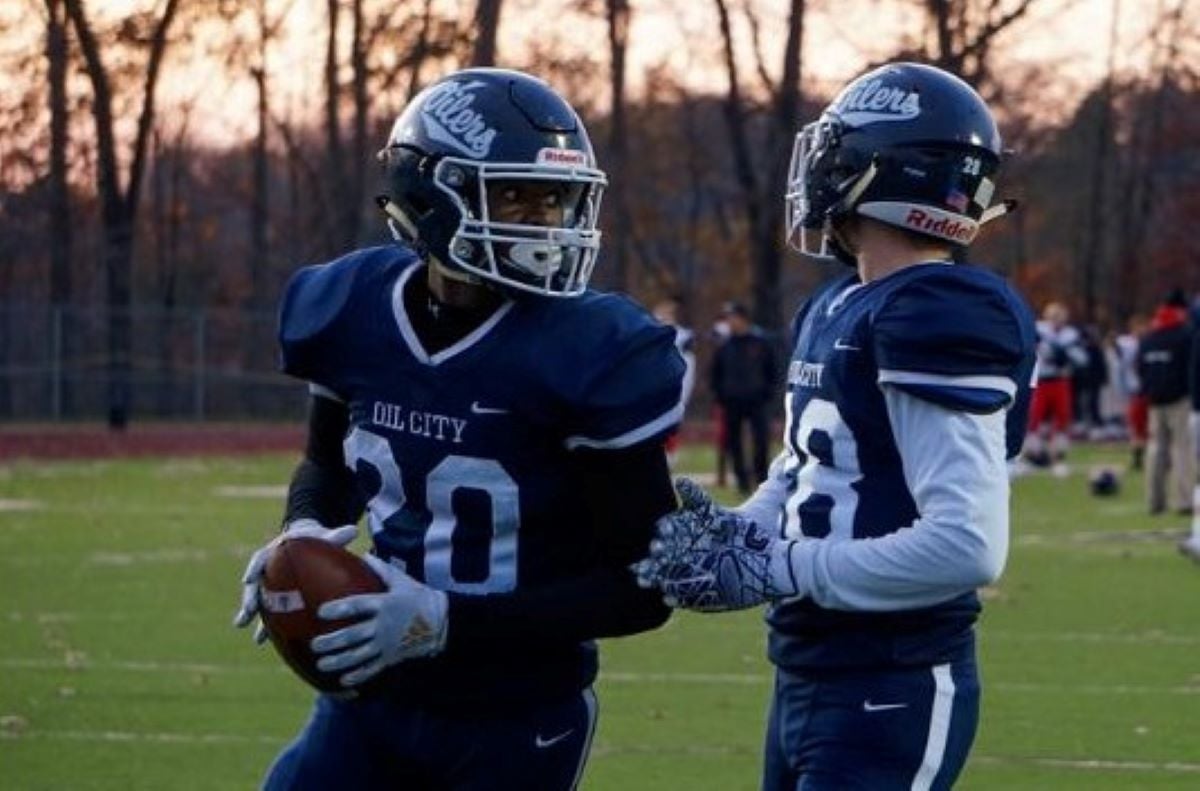 This one was special.

The Saegertown Panthers snapped a 38-game losing streak dating back to Oct. 30, 2015 (a 28-7 win over Youngsville) in a 13-6 defensive slugfest over Cochranton.

All of the scoring was done in the first quarter, as Henry Shaffer connected with Zach Yoeder to give the Panthers an early 7-0 lead.

Just over three minutes later, Wyatt Barzak hit Dustin Miller on an 8-yard scoring strike to make it 7-6 after the failed PAT.

Jake Resinger followed with a 4-yard touchdown run with just over a minute to play in the first quarter, which turned out to be the last scoring play of the game.

Resinger led the Panthers on the ground with 80 yards, while Jon Gallo had 104 yards rushing for Cochranton.

The Wildcats were held scoreless until the fourth quarter when Ryan Tewell connected with Eric Steinle from five yards out to make it 8-6 (the 2-point conversion failed).

Northwestern got the ball back and scored on Tewell’s 1-yard plunge to take a 14-8 after the QB called his own number once again for the 2-point conversion.

The lead was short-lived, however, as Kaleb Donor took the ensuing kickoff to the house, tying the game. The 2-point conversion failed, setting up the overtime dramatics.

All three went over 100 yards on the ground, with Bax eclipsing the 200-yard mark.

The Jackets were dominant right from the get-go, as Barrett accounted for both his scores in the first half to help build a 28-0 lead in the second quarter.

The Lakers got within two scores at 28-14, but Essman broke off a long touchdown run in the third quarter to squelch any thoughts of a comeback.

Gus Campbell had 192 yards on the ground and a score for Mercyhurst Prep.

SLIPPERY ROCK, Pa. – William Mokel was 18-of-23 passing for 231 yards and a pair of touchdowns to lead Slippery Rock to an impressive 27-7 win over defending District 10 Class 3A champion Sharon.

Tied 7-7 at the half, the Rockets outscored the Tigers 20-0 in the second half. Mokel’s 30-yard scoring strike to Brendan Earl just over a minute into the third quarter gave Slippery Rock the lead, and Ryan Montgomery’s 2-yard touchdown run made it 21-7 late in the third.

Mokel capped his brilliant performance with a scoring toss to John Sabo in the fourth quarter.

Shane Thompson finished with 89 yards on the ground to lead the Rockets, including a 33-yard scoring run to get them on the board in the second quarter. Ja’On Phillips had six receptions for 69 yards for Sharon.

FRANKLIN, Pa. – The Route 8 rivalry was a one-sided affair, as the defending District 10 Class 5A champion Oilers looked every bit the part in a 68-6 win over Franklin.

Cam Russell led a stable of Oiler rushers behind an imposing offensive line, toting the ball 11 times for 198 yards and a pair of scores.

The Oilers led 54–0 halftime on the strength of Russell and a strong first half from Holden Stahl, 2-of-2, 95 yards, two passing TDs, including a 58-yarder to JT Stahlman, Sean Stack (80 yards, 2 TDs) and a 68-yard interception return courtesy of Dakota Cole.

TITUSVILLE, Pa. – Khalon Simmons rushed for 228 yards and three touchdowns to lead Meadville to a 45-6 win.

In a game that was scheduled after Titusville’s opener against Warren was postponed, the Bulldogs struck early on a 2-yard scoring plunge from Tamoj Lyons-Glover.

Simmons broke off a 68-yard scoring run in the second quarter and Sam Burchard hit Lyons-Glover on a 41-yard scoring strike to make it 27-0 at halftime.

Griffin Buzzell had 90 yards and a score on the ground for the Bulldogs, while Titusville’s Garrett Knapp threw for 160 yards and a fourth-quarter 23-yard touchdown pass to Brock Covell.

RUSSELL, Pa. – In a game broadcast on D9and10sports.com, Eisenhower turned in a dominant defensive effort, limiting Union City to 35 yards of total offense in a 47-0 victory.

Offensively, the Knights showed off their vast array of weapons, as the offensive line paved the way for Zane Alexander, Cael Black, Owen Trumbull, Dillon Benson and others.

After Trumbull connected with Caleb Robinault on a 4-yard strike to get the Knights on the board late in the first quarter, Alexander took over in the second, scoring on a 65-yard punt return and a 42-yard run, followed by a 1-yard plunge from Trumbull to make it 27-0 at halftime.

Black, who rushed for 110 yards, scored on a 21-yard run in the third quarter, which was followed by a Trumbull to Benson 22-yard touchdown strike in the fourth. Steve Reilly capped the scoring with a 22-yard run.

Black was named the Allegheny Grille of Foxburg/Jim Kelly Player of the Game.

WEST MIDDLESEX, Pa. – Cole Toy had a monster game, rushing for four touchdowns to lead the Raiders to a season-opening win over West Middlesex.

Toy scored on runs of 14 and 31 yards in the second half and his third score of the game broke a 14-14 tie in the third quarter.

The Big Reds’ Blaze Knight rushed and threw for a touchdown to Chris Smith in the first half, and Knight’s 11-yard scoring run in the fourth quarter made it 21-20, but the extra point was missed.

Justo Rivera had one touchdown each rushing and receiving for the Trojans.

HERMITAGE, Pa. – Hickory jumped out to a 20-0 lead and never looked back in a season-opening win over Grove City.

Grove City got 160 yards and a score through the air from Logan Breese and a rushing touchdown courtesy of Curtis Hovis.

ERIE, Pa. – Jaheim Williams and Tamar Sample scored two touchdowns each on the ground as Cathedral Prep pulled away from Butler in the Golden Torando’s District 10 debut.

Michael Parks led the Ramblers in rushing yards and also found the end zone, while Cooper Baxter went over 100 yards rushing and receiving and had a pair of scores on the ground for Butler.

Tristin Harris and Jack Rimpa both went over 100 yards on the ground and scored a pair of touchdowns each in the win.

C-L Volleyball Starts Season with Win Over Forest Area
Week 1 2020 District 9 Recaps: Mangiantini Accounts for Five TDs in Redbank Valley Win
We use cookies on our website to give you the most relevant experience by remembering your preferences and repeat visits. By clicking “Accept All”, you consent to the use of ALL the cookies. However, you may visit "Cookie Settings" to provide a controlled consent.
Cookie SettingsAccept All
Manage consent