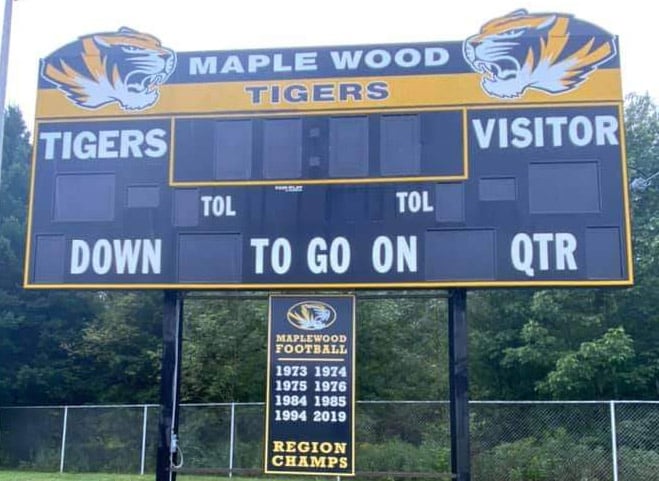 GUYS MILLS, Pa. – The tables turned for Maplewood on Friday.

After a season-opening overtime loss to Northwestern, the Tigers rallied from a 22-8 deficit to beat Lakeview 30-22 in OT for their first win of the season.

Dominick Kinney connected with Jesse McFadden for what proved to be the game-winning score, as the Tiger defense stopped the Sailors on the ensuing possession.

Lakeview raced out to a 15-8 halftime lead thanks to a pair of special teams touchdowns, and went ahead 22-8 on Kendall Crocker’s touchdown run in the third quarter.

Kaleb Donor’s 14-yard touchdown run, his second of the game, in the fourth quarter, coupled with the 2-point conversion tied the game at 22-22.

Kinney threw for 187 yards through the air, all but 20 of which went to McFadden.

NORTH EAST, Pa. – Landen Weis’ touchdown run in overtime sent the Beavers to their first win of the season in dramatic fashion over North East.

Tied 7-7 at the end of regulation, Corry’s defense held at the start of OT, and the Pickers’ Casey Burch booted a 20-yard field goal.

Weis’ walk-off touchdown was his second score of the game, as he accounted for 125 yards on the ground.

EDINBORO, Pa. – In a matchup of the top two teams in Region 6, Casey Smith and Cameron Williamson led Harbor Creek to a convincing win over General McLane.

Smith threw 100 yards and a touchdowns for the Huskies (3-0), who built a 21-0 halftime lead. His touchdown went to Ryan Whitman.

Williamson was a workhorse in the backfield, rushing for 140 yards and a pair of scores.

Jared Ivarone-Campbell had 76 yards and a touchdown on the ground for GM (2-1).

ERIE, Pa. – Typically, McDowell’s Chris Juchno gets things done with his arm, but the senior quarterback did it with his legs in lifting the Trojans to a signature win over Cathedral Prep.

Juchno scored on a pair of 1-yard runs in the first half and McDowell (3-0) never trailed in beating their arch rival.

Prep’s lone touchdown of the game actually game via a Juchno throw, as Levonne Rowan stepped in front of a pass for a pick six.

No matter, however, as Taha Ramahi’s touchdown run in the fourth quarter sealed the win for McDowell.

RUSSELL, Pa. – Owen Trumbull threw for three touchdowns, Cael Black ran for two and Eisenhower continued its romp through Region 5, improving to 3-0 with a 56-6 win over Seneca.

Trumbull added a 57-yard touchdown run to open the second half for good measure, as Ike has now outscored its opponents 158-12 through three games.

GREENVILLE, Pa. – Cole Toy went over 100 yards rushing and had three touchdowns in the first half as Reynolds rolled past Kennedy Catholic.

Aidan Mull scored a pair of rushing touchdowns for the Raiders and Luca Tofani recorded three interceptions, including a pick six.

WEST MIDDLESEX, Pa. – Ty Tate, Colby Johnson, Ian Smith and Alex Rea all scored on the ground for West Middlesex in  a 35-7 win over Mercer.

Eddie Lowe returned the second-half kickoff for the Big Reds to bring the Mercy Rule into effect.

Aidan Bright scored on a 2-yard touchdown run in the fourth quarter for the Mustangs (1-2).

GREENVILLE, Pa. – Anthony Stallworth had 161 yards rushing and three touchdowns … in the first half to lift the Steelers (2-1) to a bounce back win over Greenville.

The Steelers, who were coming off a tough loss to Wilmington, also got a 35-yard touchdown run from Brandon Chambers in the second half.

Mason Dickens scored on a 2-yard run for Greenville.

Trian Holden threw a touchdown pass to Rufus Byler for the Steeles, and Kylon Wilson also scored on a touchdown run.

NEW WILMINGTON, Pa. – Caelan Bender led another brilliant rushing performance from Wilmington as they moved to 3-0 with a blanking of Sharpsville.

Bender, Ethan Susen, Darren Miller and Luke Edwards all scored on the ground for the Greyhounds (3-0), with Susen going for 96 yards in the win.

ALBION, Pa. – Northwestern’s defense was dominant as they improved to 3-0 with a blanking of Cochranton.

Ryan Tewell rushed for a score and also threw one to Dawson Fiesler.

CAMBRIDGE SPRINGS, Pa. – Cambridge Springs raced out to a 35-0 lead and improved to 3-0 with their win over Saegertown.

Trenten Wheeler had a big game on the ground for the Blue Devils, rushing for 121 yards and a TD, throwing for 80 yards and a score and also returning a fumble for touchdown.

Aidan Rauscher had a pair of rushing touchdowns for the Blue Devils as well.

Jake Reisinger had a touchdown rushing and receiving for the Panthers (1-2).

MEADVILLE, Pa. – Khalon Simmons had another monster game on the ground for Meadville, rushing for 145 yards and four touchdowns to send the Bulldogs past Titusville for the second time this season.

Tamoj Lyons-Glover added a pair of scores for the Bulldogs, and Griffin Buzzell and Sam Burchard had one each.

LAWRENCE PARK, Pa. – Michael Hoopsick rushed for 211 yards and a pair of touchdowns to lead Iroquois to its second win of the season, 35-28 over visiting Union City.

Dante Carr also had a pair of rushing touchdowns for the Braves, including the game-winner in the fourth quarter.

The Braves overcame a big night from Union City running back Caleb Stull, who rushed for 175 yards and a touchdown.

Kyler Shaffer rushed for 23 yards and two touchdowns for the Bears (1-2).

District 9 and District 10 Football Scoreboard – Week 3 2020
Brookville Makes Statement with Week 3 Win Over Karns City; DuBois Picks Up First Win
This website or its third-party tools process personal data.In case of sale of your personal information, you may opt out by using the link Do not sell my personal information.
×
Manage consent