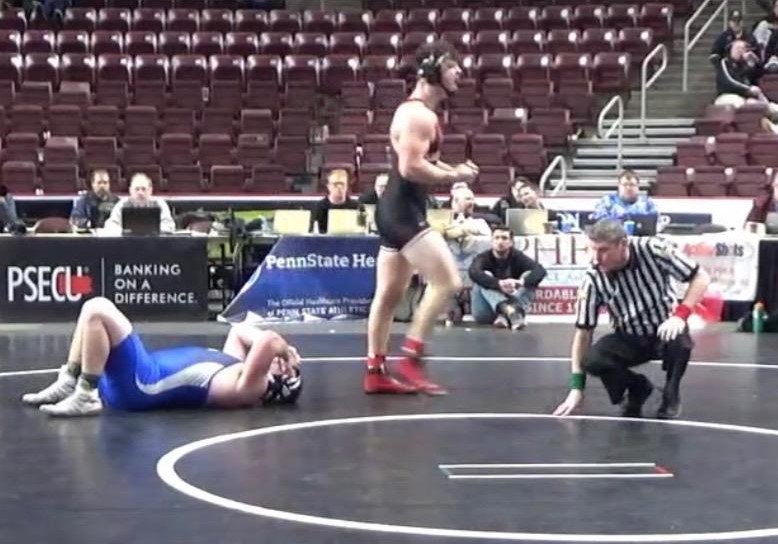 With the start of every new wrestling season, one of the more interesting exercises is trying to project who could make an impact at the district level and possibly beyond. Using the PA Power Wrestling state and regional (Districts 4, 6, 9, and 10) preseason rankings as a guide, here is a look at who to keep an eye out for in 2021, remembering that there is a certain degree of imprecision as some wrestlers will be changing weight classes, may opt out of the coming season, or not compete due to injury.

St. Marys’ Cole Neil and Punxsutawney’s Dysen Gould are ranked fifth and sixth in the NW Region, respectively. Neil is a sophomore and Gould a freshman

Evan Davis of Clearfield enters the season ranked fourth regionally. The Bison sophomore spent most of last season at 106 pounds, compiling a 26-15 record and placing second at districts.

Cranberry’s Austin Shoup was 20-8 wrestling as a 113-pounder during his freshman campaign in 2019-2020. Shoup, runner-up at the district tournament, begins his sophomore season ranked eighth in the NW Region.

Reining district 126 pound champion Lucas Laktash of Bradford posted a 29-9 mark last season. The sophomore is at number four in the NW Region rankings. Junior Brendan Orr made the most of his first varsity season for Dubois a year ago, tallying a 25-12 record and winning the district title at 113 pounds.

Freshman Will Domico of Clearfield has been singled out for mention in the preseason rankings.

A trio of juniors are ranked regionally; St. Marys’ Lane Dellaquilla (27-26 career) fourth, Bradford’s Brett Thompson (43-17 career) sixth, and Clearfield’s Nolan Barr (46-28 career) seventh. Dellaquilla qualified for regionals in his freshman and sophomore seasons, going 12-15 at 132 pounds in 2019-2020. Thompson was district runner-up a year ago at 132 pounds and had a 21-9 record. Barr finished his sophomore season at 24-13. He split time between 120 and 126 pounds, earning district runner-up status in the later.

DuBois senior Chandler Ho (84-33 career) is ranked ninth in Pennsylvania and third regionally. Ho has qualified for states in each of the last two seasons, earning the final spot on the 138 pound podium in 2019-2020 as a junior. On his way to eighth at states a year ago, Ho put up a 31-14 mark and was runner-up at both districts and regionals. He was district champion at 106 pounds as a freshman and runner-up at 120 pounds his sophomore season. Luke Freeland (42-31 career) of Clearfield is ranked fifth in the NW and Brady Smith of Punxsutawney seventh. Freeland, a junior, went 24-14 last season and earned his first trip to regionals as a 138-pounder after a third place finish at the district tournament. Smith, a sophomore, placed third at districts in the 132 pound class and had a 20-8 record.

DuBois’s Austin Mitchell, a junior, made his varsity debut for the Beavers a year ago, wrestling his way to a 20-15 record and a regional berth at 145 pounds. He is ranked fifth in the NW Region. Karson Kline (50-33 career) of Clearfield, also a junior, has qualified for regionals each of the last two seasons. In 2019-2020 he went 24-17 and was fifth in the district as a 145-pounder. Punxsutawney senior Ben Skarbek (28-24) qualified for regionals as a sophomore and junior. He was 12-8 a year ago, securing his regional spot at 126 pounds.

No District 9 wrestlers appeared in the PA Power state or regional preseason rankings.

Two district grapplers are ranked in the statewide preseason top 25, junior Mark McGonigal (64-19 career) of Clearfield 10th and senior Nick Crisp (37-14 career) of St. Marys 25th. McGonigal, also ranked third in the NW Region, qualified for states as both a freshman and sophomore. Last season his decent plan took him from 170 pounds to 152 pounds. He posted a 34-9 record along the way and was runner-up at districts and third at regionals. McGonigal won districts as a freshman at 152 pounds. Crisp is a two-time regional qualifier, finishing third at 145 pounds as a sophomore and repeating that placement as a junior at 160 pounds. Last season, Crisp, currently sixth in the region, was 12-4. The regional rankings also mention another St. Marys grappler in this weight class, junior Ravis Bobby (19-27 career). Bobby compiled a 14-13 record as a sophomore, taking the district runner-up spot at 170 pounds.

Garrett Starr (61-38 career) of DuBois is ranked 20th in the state and seventh in the region. The Beaver senior qualified for states at this weight last season, finishing second at districts and third at regionals. He was 21-11 as a junior. Starr also qualified for regionals during his sophomore season at 160 pounds. Clearfield’s Hayden Kovalcik is also ranked regionally, occupying the eighth spot. Kovalick made his varsity debut for the Bison in 2019-2020, going 28-14 and winning a district title at 170 pounds. Punxsutawney senior Joshua Miller (32-27 career) is a two-time regional qualifier; at 195 pounds as a sophomore and at this weight as a junior. Miller finished his junior season with an 11-15 mark. Sophomore Waylon Wehley of St. Marys went 15-6 at this weight a year ago.

Garrett Eddy (60-26 career) of Punxsutawney is ranked fifth in the NW Region and Alex Lukachunis of St. Marys seventh. Eddy, a senior, was the district titlist at 195 pounds last season and went 21-6. He also qualified for regionals as a sophomore, wrestling at 182 pounds. A sophomore, Lukachunis was 20-15 a year ago and took third at districts competing in the 220 pound class. Another St. Marys wrestler noted in the regional poll was junior Jeremy Garthwaite (60-37 career). He was the 182 pound district champion as a freshman and runner-up at 195 pounds as a sophomore. The two-time regional qualifier went 27-7 during his sophomore season. Cranberry’s Seth Yeager (35-24 career) qualified for regionals last year as a junior in the 195 pound class. The senior finished that campaign with a 26-12 mark. Clearfield senior Nick Domico has a combined sophomore and junior record of 14-12.

Heavyweight state medalist Oliver Billotte (52-16) of Clearfield will begin his junior season ranked fifth in Pennsylvania and second in the NW Region. Last season Billotte put together a 37-7 record, winning districts, placing second at regionals, and eighth at states. He was also a regional qualifier as a freshman at 195 pounds. After missing all of last season due to injury, Brayden Crocker, a junior, is expected to return to Cranberry’s line-up. He was a state qualifier in 2018-2019 as a freshman, a season which saw him go 30-4 and win districts at 195 pounds.

2020-21 Punxsutawney Boys’ Basketball Preview Powered by Potter County Family Campground
WATCH LIVE: Franklin at Warren Girls Basketball
This website or its third-party tools process personal data.In case of sale of your personal information, you may opt out by using the link Do not sell my personal information.
×
Manage consent