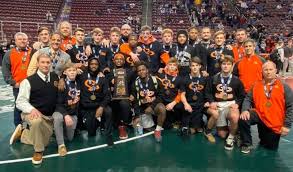 With the start of every new wrestling season, one of the more interesting exercises is trying to project who could make an impact at the district level and possibly beyond. Using the PA Power Wrestling state and regional (Districts 4, 6, 8, 9, and 10) preseason rankings as a guide, here is a look at who to keep an eye out for in 2021, remembering that there is a certain degree of imprecision as some wrestlers will be changing weight classes, may opt out of the coming season, or not compete due to injury.

Logan Sallot, a McDowell sophomore, opens the season ranked 12th in Pennsylvania and second in the NW Region. A district runner-up at this weight last year, Sallot compiled a record of 25-10. Cathedral Prep sophomore Sam Staab will begin his first varsity season ranked fourth in the region

No District 10 wrestlers appeared in the PA Power state or regional preseason rankings.

Junior Jacob Van Dee (74-19 career) is a returning state runner-up for the Cathedral Prep Ramblers. Last season he posted a 40-4 record at 106 pounds, winning districts and regionals on his way to placing second at states. He also made the trip to Hershey, but did not place, as a 106 pound freshman after winning districts and placing second at regionals. He’ll begin the season at fifth in the statewide poll and first in the region. Warren sophomore Josh Letko qualified for regionals a year ago and went 13-19 wrestling at both 113 and 120 pounds.

Vince Rinella (81-22 career) will begin his senior season at Meadville looking to cap off his career with a state medal. He’s qualified for the big show at the Giant Center the past three years but has thus far come away empty handed. As a junior he was 21-6 and won districts at 113 pounds. Rinella also won districts as a sophomore at 113 pounds and was runner-up at 106 pounds when a freshman. The Bulldog grappler is ranked 10th in the state and second in the NW region. Caleb Butterfield, a McDowell sophomore, and Phillip Stark (17-19 career), a Cathedral Prep senior, are each regionally ranked; Butterfield sixth and Stark seventh. As a freshman Butterfield descended from 126 to 120 pounds, posting a 23-14 record while doing so and winning districts at the lower weight. Stark saw his first significant varsity time last season, going 16-14 and placing second at districts in the 113 pound class (after starting the season at 120 pounds). Erie senior Damareon Nickson (23-27 career) was 19-14 a year ago as a 120-pounder.

Kaeman Smith (60-23 career) of Cathedral Prep is ranked 10th in the state and fourth regionally. A returning state qualifier, Smith was 34-10 in 2019-2020 and won districts at 126 pounds. Smith also qualified for regionals at 113 pounds as a freshman. Two other grapplers are regionally ranked, Meadville sophomore Westin Chess is sixth and McDowell senior Nathan Digello (52-46 career) eighth. Chess was 22-18 in his first varsity campaign, earning runner-up status at districts in the 120 pound class. Digella is a three-time regional qualifier. Last year he went 24-16 at 126 pounds in a season that saw him secure his third consecutive regional berth. As a freshman he qualified for regionals at 113 pounds and repeated the feat at 120 pounds as sophomore.

Steffan Lynch, a Cathedral Prep sophomore, begins this season ranked fifth in the region after winning districts at 132 pounds last season. He had a freshman record of 29-16. Junior Logan Carrick of McDowell saw his first significant varsity action in 2019-2020. Carrick went 19-15 and was district runner-up at 132 pounds. Meadville junior Avery Brunson (31-22 career) was 12-10 a year ago wrestling primarily as a 126-pounder.

Matt Leehan (106-34 career), a senior, qualified for states twice as a General McLane Lancer; at 120 pounds as a freshman and at 132 pounds last season. Ranked 18th in Pennsylvania and fourth regionally, he was 42-9 as a junior. Another General McLane wrestler received mention at 145 pounds, sophomore Kyle Cousins. He went 14-9 during his freshman season splitting time at 138 and 132 pounds.

Cathedral Prep senior Paniro Johnson (105-19 career) is a three-time district champion, three-time regional champion, and three-time state medalist. As a junior he wrestled at 145 pounds and earned his highest state placing, a third. He had a 40-3 record. Johnson was eighth at states as a 120 pound sophomore and fifth at 145 pounds as a sophomore. The Rambler wrestler is ranked third in the state and first in the NW Region. Two other seniors are also regionally ranked, General McLane’s Aric Sweet (26-14 career) at fourth and McDowell’s Caden Farr (25-23 career) at eighth. Sweet wrestled mainly at 145 pounds last year and posted a 16-18 record. Farr is a two-time regional qualifier, earning a spot in that tournament at 138 pounds as a sophomore and at 145 pounds last season. A year ago he finished with a 9-7 record.

Jackson Spires (44-11 career), a senior at General McLane, is a returning state medalist, having placed seventh last year at 145 pounds. His junior season saw him put up a 29-5 tally while also winning districts and taking second at regionals. Spires qualified for states at 145 during his sophomore campaign. He is fourth ranked in Pennsylvania and first in the NW Region.

Two-time regional qualifier Kelyn Blossey (53-33 career), a Cathedral Prep junior, is ranked 23rd in the state and fifth in the region. As a sophomore he descended from 170 to a postseason weight of 160 pounds, going 29-13 in the process and winning districts. Blossey won districts his freshman season competing at 160 pounds. Senior Joey Arnold (57-42) of Warren is a three-time regional qualifier, earning a spot at that tournament at 195 pounds as a freshman and sophomore and last year at 160 pounds. His junior-year record was 27-7 and he was district runner-up. McDowell senior Noah Bielak (28-51 career) is also a three-time regional qualifier, each year at 170 pounds. He won districts as a sophomore. Bielak complete his junior season with a 19-19 tally. Magnus Lloyd will be a freshman at General McLane.

Meadville’s Griffin Buzzell (43-27), a junior, is 19th ranked in the state and sixth in the region. He went 27-9 as a senior, winning districts at 182 pounds and then finishing second at regionals to secure a spot a states. His freshman year culminated at regionals in the 160 pound class. Senior James Laird (81-49 career) is a three-time regional qualifier, at 182 pounds as a freshman and 170 pounds as a sophomore and junior. He finished last year with a record of 40-15.

Sophomore Rhoan Woodrow of Meadville was 23-13 last year and won districts at 195 pounds. General McLane’s Jessi Stempka, also a sophomore, is expected to make his varsity debut this season.

Wilson Spires, a sophomore at General McLane, garnered seventh position on the NW poll. Spires was 34-15 and qualified for regionals at 220 pounds last year. Senior John Campbell of Cathedral Prep was a first time starter in 2019-2020. He spent time at both 285 and 220 pounds, posting a 21-12 mark, qualifying for regionals at the later.

2020-21 Clarion-Limestone Boys’ Basketball Preview Powered by Potter County Family Campground
WATCH LIVE: Karns City at Moniteau Girls Basketball
We use cookies on our website to give you the most relevant experience by remembering your preferences and repeat visits. By clicking “Accept All”, you consent to the use of ALL the cookies. However, you may visit "Cookie Settings" to provide a controlled consent.
Cookie SettingsAccept All
Manage consent