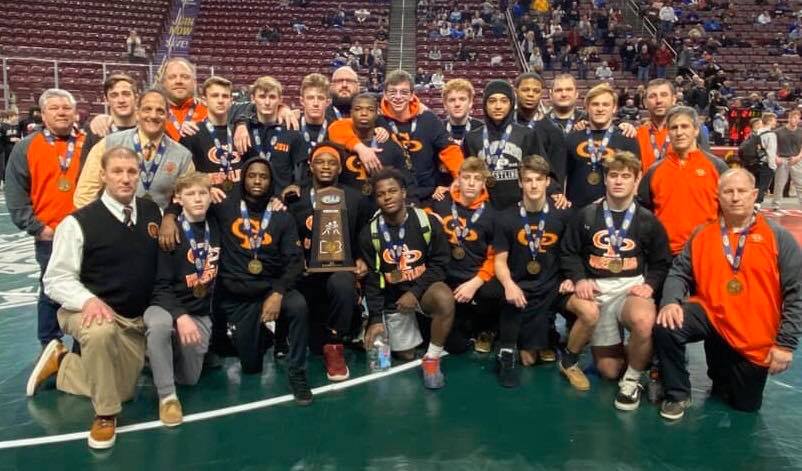 Wrestling begins at 3 p.m., with the Parade of Champions scheduled for 6:15 p.m. and the finals following at approximately 6:30 p.m.

The top two placers (a true second will be determined) in each weight class will advance to the NW Regional Championships next weekend (Saturday, Feb. 27) in Altoona.

Notes: Walker is a freshman. Staab, a sophomore, is ranked fourth regionally by PAPW. Sallot was district runner-up at this weight last season. PAPW has the sophomore ranked 10th in the state and second in the region.

Notes: Van Dee will be looking to win his third consecutive district title. Last year, wrestling at 106 pounds, he used it as a springboard for a first-place finish at regionals and second place finish at states. Van Dee also qualified for states his freshman season after taking second at regionals. A junior, he is ranked second in the state by PAPW and first in the NW Region. Watkins and Ream are both freshmen.

Notes: Irvin is a sophomore, while Brest and Altman are freshmen.

Notes: Stark, a senior, was district runner-up at 113 pounds in 2020. He is ranked fifth in the NW Region by PAPW. Also a senior, Northup is a two-time regional qualifier, last year at 132 pounds. Zeiser is a freshman.

Notes: Smith, a junior, won districts at 126 pounds in 2020, taking second at regionals to qualify for states. He was also a regional qualifier as a freshman. PAPW has him 13th in the state poll and fifth in the region. A sophomore, Chess was runner-up at 120 pounds last year. He is ranked eighth regionally. Digello, a senior, is a three-time regional qualifier, doing so a season ago at 126 pounds.

Notes: Anderson is a freshman. Hunt, a junior, is ranked eighth in the region by PAPW. A junior, Carrick was district runner-up at 132 pounds in 2020.

Notes: PAPW has Lynch, a sophomore, ranked 19th in the state and second in the NW region. Last season he was the district champion at 132 pounds. A senior, Leehan qualified for states as a freshman, as well as last year (doing so at 132 pounds). He is ranked 16th in the state and first regionally. Fiscus, a senior, was a regional qualifier as a freshman and sophomore.

Notes: Johnson will be looking for his fourth consecutive district title, hoping to use it as a springboard to go after a fourth regional crown. The senior has placed at states each year he has wrestled at the varsity level, finishing eighth as a freshman (120 pounds), fifth as a sophomore (145 pounds), and third last year (145 pounds). Johnson is ranked third in the state by PAPW and first in the NW Region. Dedrick is a freshman and Simmons a sophomore.

Notes: Spires, a senior, is on the hunt for his third district championship in a row. Last year he parlayed it into a trip to states, where he finished seventh at 145 pounds after taking second at the regional tournament. He was also a state qualifier at 145 pounds as a sophomore, again after a runner-up finish at regionals. PAPW has him ranked sixth in the state and third regionally. Tidball is a freshman. Like Spires, Blossey, a junior, will be looking for his third consecutive district title, winning at 160 pounds the past two years. He is 25th in the state poll and fifth in the regional.

Notes: Lloyd is a freshman and ranked sixth in the NW Region by PAPW. Bielak is a three-time regional qualifier, making the trip to Altoona last year at 170 pounds. He finished first at this tournament during his sophomore season, wrestling as a 170-pounder. PAPW has him in seventh regionally. Shetler is a sophomore.

Notes: Campbell qualified for regionals last year at 285 pounds. The senior is ranked eighth in the NW Region by PAPW. Woodrow, a sophomore, was district champion at 195 pounds in 2020. Hall is a senior.