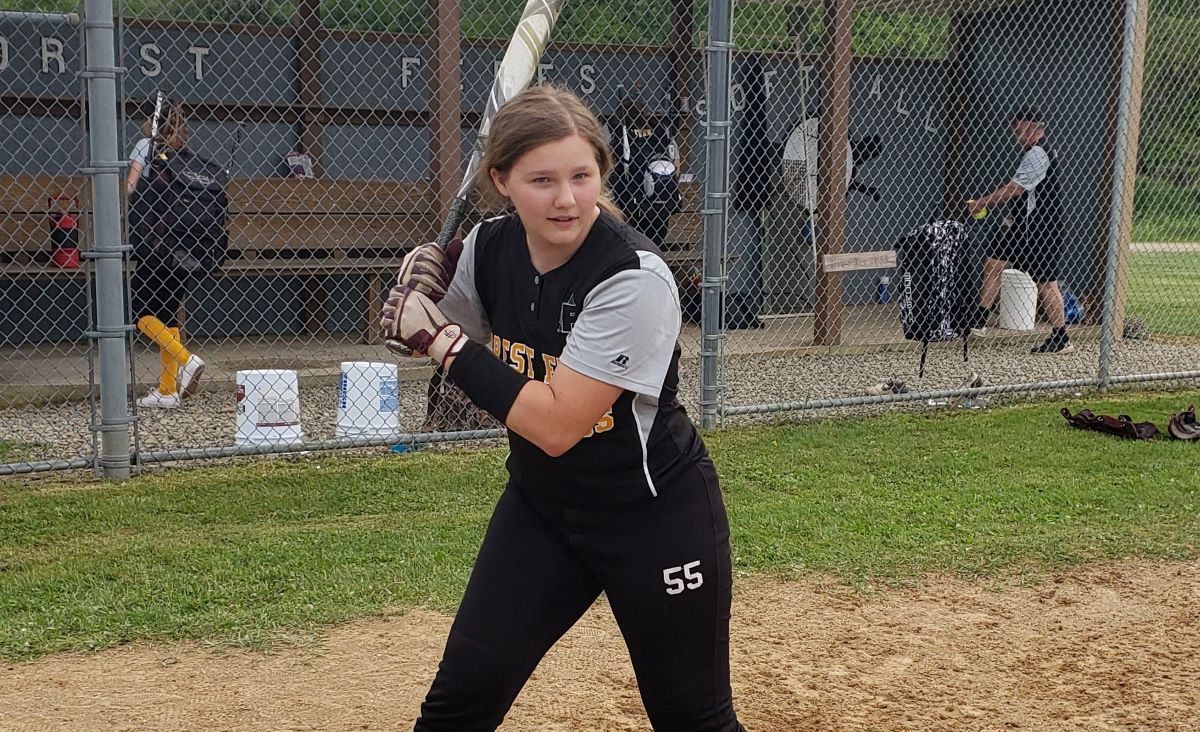 Faith Dietrich of Forest Area had six RBIs on a pair of bases-loaded, bases-clearing doubles in Forest Area's win over Clarion Monday. Photo by Chris Rossetti

The Forest Area catcher had a pair of bases-loaded, bases-clearing RBI doubles to help the Fires to a 16-1, four-inning victory over visiting Clarion in the quarterfinals of the District 9 Class 1A playoffs Monday afternoon at West Forest.

“It was nervewracking, a little bit,” Dietrich said. “We lost last year 17-12 in the first (playoff) game (to Elk County Catholic). Doing (this) was pretty nice.”

Dietrich’s first three-run double was the key hit in a six-run first inning for Forest Area and came after Clarion allowed the inning to continue when the second baseman and the right fielder allowed a pop fly off the bat of Maggie Boehme to land between them with two outs scoring the game’s first two runs.

Izzy Flick followed with a single up the middle and Akeela Greenawalt walked before Dietrich drove a pitch down the left-field line to make it 5-1.

“Every time Faith is up to bat, I think this could be the one where she hits it into the trees,” Forest Area first-year manager Eric Flick said. “That is just the kind of hitter she is. She hits the heck out of it when she does, and she may strike out a lot. It was a big day. I am glad for her. She needed that confidence.”

After striking out to end the third inning, Dietrich got another chance in the fourth and all but put the game in the books when she crushed a pitch from Payton Simko well over centerfielder Noel Anthony’s head – truth be told on a field with a fence, something West Forest doesn’t have – the ball would have been a grand slam. The three-run double pushed the score to 12-1.

“They were mainly down the middle ones,” Dietrich said when asked what kind of pitches she hit for her doubles.

Dietrich wasn’t the only Forest Area player to have a big day.

“It’s not really all that much of a surprise,” Eric Flick said. “They all can bat.”

The run support was more than enough for Izzy Flick, who after getting over some first-inning nerves settled into a grove that saw her record nine of the final 10 outs via strikeout including six strikeouts in a row from the last out of the second inning through the second out of the fourth inning.

“She was nervous at first,” Dietrich, her catcher, said. “It was definitely an experience for her. But I was very proud of her. She did very well.”

Those nerves were on hand in the top of the first when Clarion scored its lone run thanks to an error, a hit, and two walks. Bri Forrest’s sac fly to second base scored an alert Noel Anthony from third for the game’s first run.

But after walling Hadlee Campbell to load the bases with two outs in the first, it was like a light flickered on for Flick, and she struck out Troese to begin her run of ks.

“She did have some control issues in the beginning,” Eric Flick said. “She is young (only a sophomore). She will get that brand new ball that has some waxiness on it, and it bugs here. It may not even be that big of a problem, but in her head, it’s bugging her. It takes a little bit to just get over it. But she settled in.”

Third-seeded Forest Area will take on second-seeded Otto-Eldred, an 8-1 winner over Clarion-Limestone, in the semifinals Wednesday at a time and site to be determined.

DUKE CENTER, Pa. – A year ago, seventh-seeded Clarion-Limestone walked into Duke Center and upset second-seeded Otto-Eldred in the District 9 Class 1A quarterfinals.

Bri Heller made sure there wouldn’t be a repeat performance for the Lady Lions.

Heller went 3-for-4 with a pair of home runs and three RBIs to pace the second-seeded Lady Terrors to an 8-1 win over visiting C-L in the 2022 D9 1A quarterfinals.

Heller also was the winning pitcher allowing one run on three hits and a walk while striking out eight.

Jesse Hall added a 3-for-4 day with an RBI for Otto-Eldred with Susie Rounsville going 1-for-4 with two RBIs, and Carrier Drummond 1-for-3 with an RBI.

Kendall Dunn was 1-for-3 with a triple for C-L, while Frances Milliron went 2-for-3 with an RBI.

Otto-Eldred will take on third-seeded Forest Area in the semifinals Wednesday.

Brooke George and Mackenzie George had hits for Oswayo Valley.

Dinkfelt, Pasternak Homer in DuBois Baseball Win over Brashear; Port Tops Coudy in 2A Opening Round Powered by North Washington Rodeo
May 24, 2022 D9/10 Baseball/Softball Schedule Powered by the BHL Sportsperson of the Year Award
This website or its third-party tools process personal data.In case of sale of your personal information, you may opt out by using the link Do not sell my personal information.
×
Manage consent