Despite Cancellations, Exciting Week 3 Slate on tap for District 10 Football 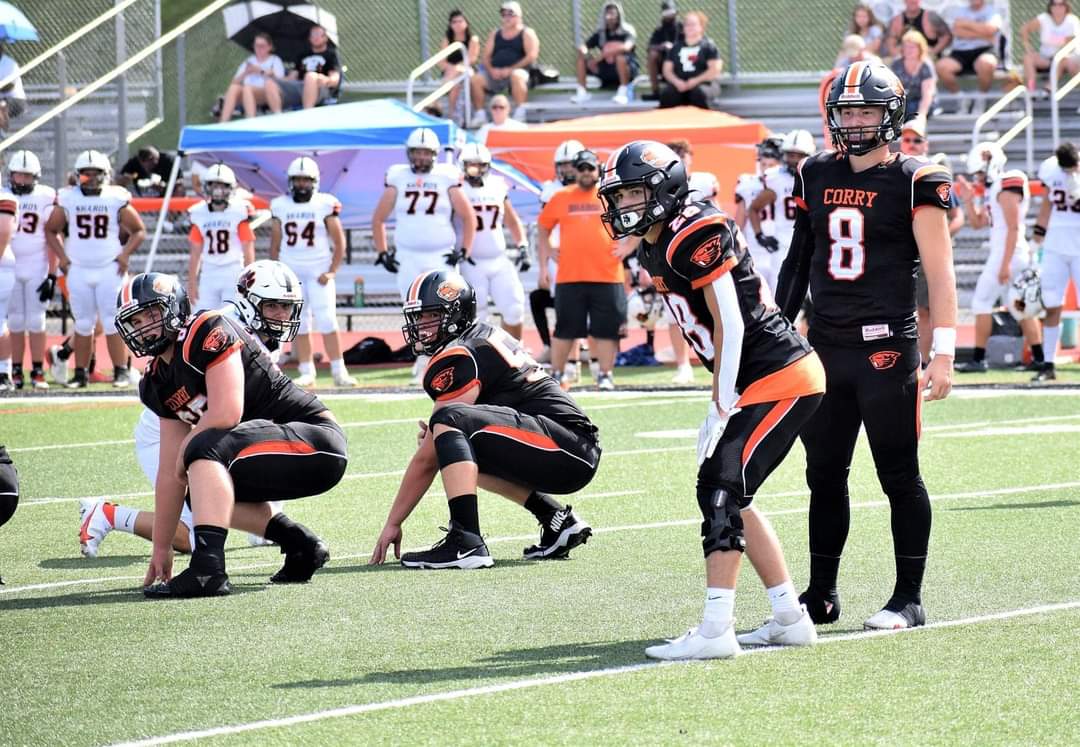 Corry battles North East with both teams in search of their first win. Photo by Jeff Parkin.

It’s been a tough week for District 10 football.

A total of five games have been canceled over COVID-19 issues – Wilmington at Oil City, McDowell at General McLane, Saegertown at Maplewood, Northwestern at Cambridge Springs and then Wilmington again, with their new opponent, St. Thomas Aquinas (Ohio) forced to cancel as well. As of Thursday morning, the Greyhounds were still looking for a game.

There will be football, however, and some good matchups dot the schedule.

We have learned a few things over the first two weeks, with contenders like Farrell, Cathedral Prep, Meadville and Northwestern looking as advertised, with a few teams, such as Warren, Slippery Rock and Fairview impressing in getting off to 2-0 starts as well

Here’s a look at how things shake out for Week 3.

Greenville is coming off a big win over Lakeview, while Sharpsville, after a season-opening victory over Loudonville (Ohio), dropped a 35-10 decision to Slippery Rock.

The Trojans put together a strong performance after a tough loss to Farrell to open the season. They got down to Lakeview 8-0 but scored 29 points in the second quarter to assume control. Levi Swartz was a monster, putting together one of D10’s top rushing performances to date this young season with 241 yards and five touchdowns.

Sharpsville, meanwhile, will look to get things going offensively after scoring just 17 points in its first two games.

Both teams own wins over Kennedy Catholic, with Reynolds losing its opener to Wilmington and Mercer getting blanked last week by Farrell.

Jake Badger, Nathan Haines and Logan Turton lead a Mercer backfield that places an emphasis on running the football.

Cochranton was off last week after a Week 1 victory over Union City (22-0), while the Bobcats are coming off losses to Northwestern and Cambridge Springs.

The Cardinals will lean on the run game and Jack Martinec, who rushed for 155 yards in the win over Union City.

For Seneca, Nolan Seabury is a dual-threat quarterback in a ground game that will also feature Ryan Miller.

A pair of teams that are in search of their first win. Iroquois had its week two game with Saegertown canceled after a season-opening loss to Maplewood, while Union City has lost to Cochranton and Eisenhower

The Braves will rely on their run game, led by Michael Hoopsick, who was just shy of 100 yards on the ground in the opener. Also look for quarterback Sean Divins to be a threat on the ground.

After getting shut out in Week 1, the Bears got their offense going in the second half against Ike. quarterback Kyler Shaffer has rushed for 170 yards and two touchdowns, while Owen Kerns has 138 yards rushing and a score.

Grove City has played a pair of thrilling games this season, winning a 50-48 contest over Meadville in its opener before falling 17-14 at Fort LeBoeuf.

Curtis Hovis has rushed for 270 yards through two games, with most of that damage coming in the win over Meadville. Quarterback Hunter Hohman has thrown for 494 yards and four touchdowns, with Joey Hathaway (206 yards), Gavin Lutz (120 yards) and Anthony Pereira (114 yards serving as his favorite targets.

Conneaut enters at 2-1, coming off a lopsided 46-14 win over North East. Zack Rice carried for four touchdowns and 175 yards in the win, with Nathan Kotson eclipsed 100 yards through the air.

Mercyhurst Prep finally gets to play its first game, something Fort LeBoeuf did last week in a thrilling 17-14 win over Grove City.

Isaac McGuire’s 52-yard touchdown pass to Jared Lichtinger gave the Bison a 17-7 lead in the third quarter, and that proved to be enough despite the Bison getting outgained. Justin Leuschen had 85 yards on the ground and a touchdown to lead LeBoeuf.

Two teams with very different starts to their respective seasons, as Fairview has opened with a pair of blowout wins over Cambridge Springs and Franklin, while Girard is coming off losses to a pair of contenders in both D9 and D10 – Karns City and Hickory.

Jared Gennuso has been a workhorse so far for the Tigers, rushing for 256 yards and seven touchdowns. Charles Chevalier has 158 yards rushing and quarterback Tyler Corbin has added a pair of rushing scores while also tossing a pair of touchdown passes.

Girard will look to the duo of Gunner Bax and Zach Lowe to get things going on offense.

Corry is still looking for its first points of the season, while North East will look to build off a couple of late scores against Conneaut (Ohio) last week. Look for Casey Burch and Tyler Wittman to lead the Pickers’ ground game.

Prep gets to play someone other than Erie this week after a pair of lopsided wins over the Royals, while Warren has had a terrific beginning to its season with a shutout of Conneaut followed by a 26-14 win over Harbor Creek.

Carter Barnes has thrown for 241 yards and three touchdowns and ran for two more scores for the Ramblers, who feature the running duo of Mike Parks (158 yards, 4 touchdowns) and Suhtaun Lewis (150 yards, 2 touchdowns). Tyson Simon and Demario Crawford are the top receiving targets.

For Warren, sophomore quarterback Eric Dippold has thrown for 308 yards and five touchdowns through two games and also ran for a score. Ben White has been his top target with 158 yards receiving and three scores. Tommy Nyquist has 205 yards rushing and two touchdowns and also has a receiving touchdown, and Ethan Senz (142 yards rushing, 1 touchdown) is also a threat on the ground for the Dragons, who have yielded just 14 points through two games.

The Royals get away from the Ramblers, while the Huskies, after opening with a 42-7 win over Franklin, look to bounce back from the loss to Warren.

The Harbor Creek offense centers around Cam Williamson, who has 380 yards on the ground four scores through two games. Matt Cassidy also has 186 yards and two touchdowns.

For Erie, Adrian Tate has 102 rushing yards and Jermaine Selby 75. Look for them to also get the ball in the hands of talented tight end Marquell Darnell.

Meadville bounced back from its 50-48 loss to Grove City in the opener with a 47-7 thrashing of General McLane. Butler, meanwhile, had its Week Two game postponed after a 21-7 loss to Kiski Area.

Butler is led by Cooper Baxter, who had a 100-yard during game in the opener with a touchdown.

Eisenhower is picking up right where it left off last season with wins over Saegertown and Union City. Franklin is coming off a pair of losses to Harbor Creek and Fairview to open the campaign.

The Eagles are coming off a pair of losses to Warren and Oil City to open the season, and will step out of the region to face John F. Kennedy out of Ohio. The Eagles will lean on Logan Groover, Braden Groover and Ethan Stright offensively.

Farrell has looked every bit the part of a state title contender through two weeks, outscoring its opponents 124-0. Lakeview, after an impressive opening win over Titusville, fell to Greenville last week.

Dual-threat quarterback Gavin Murdock threw for 148 yards, but was intercepted three times for Lakeview in their loss to Titusville. Murdock also rushed for 109 yards and two touchdowns. His favorite targets are Calogano Wilkins (129 yards, 1 touchdown) and Mitchell Tingley (80 yards, 1 touchdown).

Hickory bounced back from a tough Week 1 loss to Ursuline (Ohio) with a 35-7 win over Girard, while Sharon lost a tough one (21-14) to University Prep after a win over Corry in its opener.

Logan Woods has thrown for 393 yards and four touchdowns for Hickory with a pair of reliable targets in Keenan Scullin (255 yards, two touchdowns) and Ramarion Whitehead (81 yards, 2 touchdowns). On the ground, Sean Kennedy has 130 yards and two scores.

For Sharon, quarterback Mikey Rodriques has thrown for 244 yards and a pair of scores to Ja’on Phillips, who has 197 yards receiving. Jayden Robinson and Labrae Norris are the leading ground gainers for the Tigers.

The third time was a charm for Wilmington in scheduling a game for Week 3, as they will hit the road to Findlay, Ohio to take on Liberty-Benton.

Luke Edwards ran wild in a 50-0 Week 1 win over Reynolds, accounting for 150 yards and three touchdowns. Ben Miller added 77 yards on the ground, while Tuff McConahy completed 3-of-4 passes for 42 yards and a touchdown to Cole McCallister.

You Pick The Winner of Select Football Games in Week Three 2021
D9 football Week 3: Eight unbeatens, no showdowns
This website or its third-party tools process personal data.In case of sale of your personal information, you may opt out by using the link Do not sell my personal information.
×
Manage consent