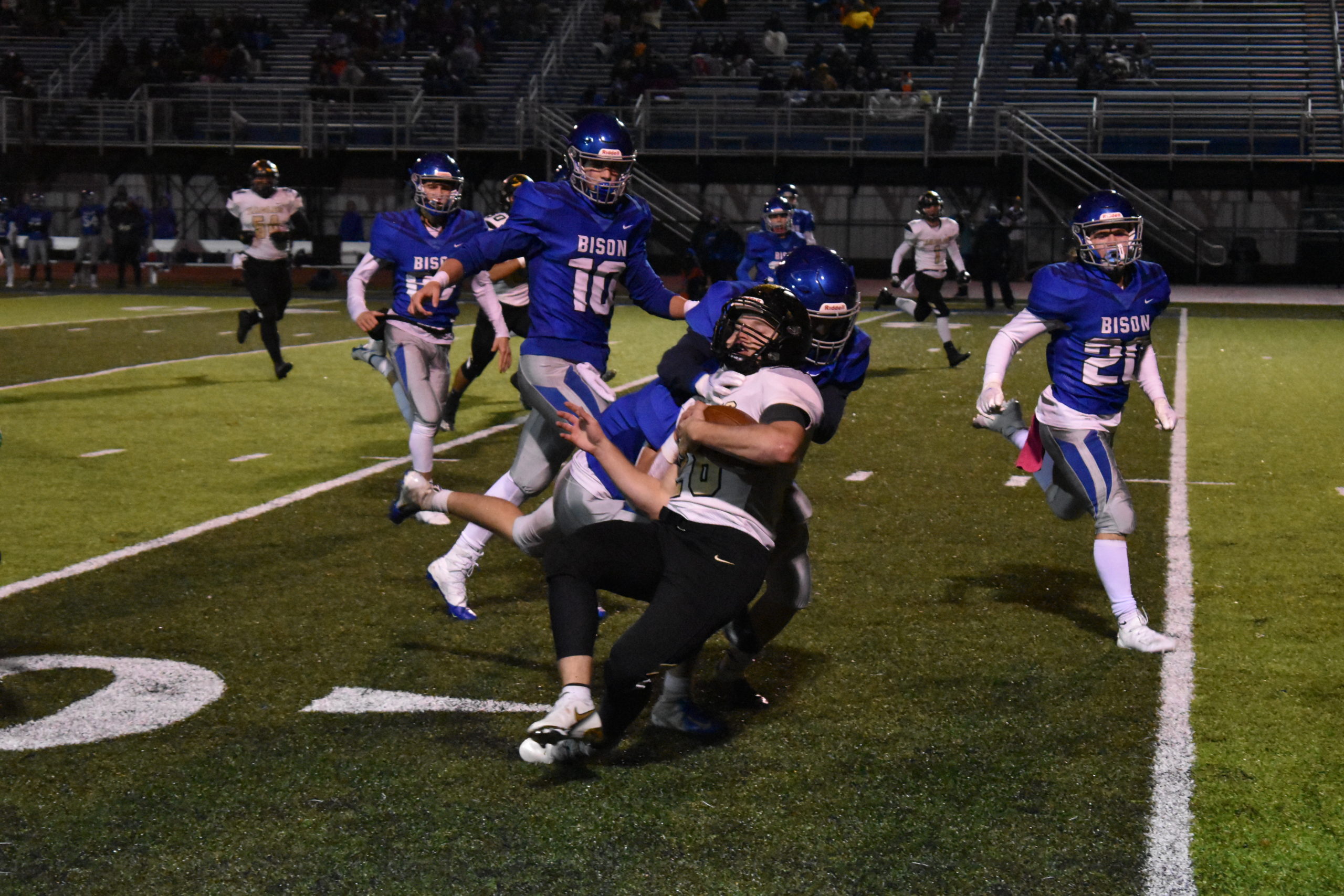 Grove City's Curtis Hovis is brought down after a big gain during Friday's District 10 Class 3A semifinal against Fort LeBoeuf.

WATERFORD, Pa. – There was nothing fancy about Grove City’s game plan against Fort LeBoeuf in their District 10 Class 3A semifinal game.

The Eagles employed a brand of smash-mouth football to knock off the previously unbeaten Bison, 30-0 to advance to the D-10 title game.

“As the years go on you really learn to appreciate wins,” said Grove City coach Sam Mowrey. “There’s a lot of time and effort from these kids that they put in. Both teams put in that effort. It feels good to come out and play your best football. It wasn’t a perfect game, but the kids did a great job and they earned that feeling of success.”

The Eagles (4-3) had a lot of success through the air this season, but on Friday it was the ground game and Curtis Hovis that led the way.

Grove City’s offensive line was dominant and Hovis ran wild right from the get-go to the tune of 216 yards and a pair of touchdowns, including a 1-yard plunge to open the scoring at the 7:36 mark of the first quarter.

Conversely, Fort LeBoeuf’s leading rusher, Tristin Harris, was injured on the first drive and was unable to return. Harris had rushed for 831 yards coming into the game.

“Unfortunately, injuries are a part of the football game,” Mowrey said. “We felt really bad for 24 (Harris). We’re thinking of him. To put so much time into a sport that you love and have injuries, that’s tough.”

Despite the loss of Harris, the Bison (6-1) hung tough.

Jack Rimpa’s 31-yard punt return set them up with great field position early in the second quarter, but Zach Rodgers intercepted Alex Blose inside the 10 to thwart the scoring chance.

The momentum shifted instantaneously, as Hovis busted loose on a 77-yard run and Anthony Nemec took care of the final 15 yards for the score to make it 12-0.

“I thought we executed well,” noted Mowrey. “And again, that starts up front. Our offensive line did a great job.”

The Eagles put the finishing touches on a nearly perfect half after forcing a LeBoeuf punt.

Hovis carried eight times on a drive that took just over three minutes for the fast-paced GC attack, and Logan Breese capped it off by throwing a 2-yard touchdown pass to Anthony Pereira to make it 18-0 at halftime.

That was more than enough for the Grove City defense, which was flying to the ball all night.

The normally vaunted LeBoeuf attack was limited to just 110 yards of total offense.

“Coach (Brad) Razona (defensive coordinator) had a great game plan, and as he said, you could see from the first snap  the kids played almost a little different tonight,” Mowrey statd. “The defensive effort really set the tone for the game. It was fun to watch.”

The Eagles broke the back of the Bison in the third quarter, going on a 15-play, 86-yard drive that chewed up seven minutes of clock, completed by a Hovis 14-yard touchdown run.

“He did a fantastic job tonight.,” Mowrey said of Hovis. “He has great speed and is just a physical specimen. He’s a great kid, team captain, can’t say enough good things about him. In the classroom, I think his worst grade is a 98. We talk about our vision to build men of integrity and that defines Curtis Hovis.”

Nemec finished off the game with a 42-yard touchdown run in the fourth quarter.

With the win, Grove City moves on to face Hickory for the District 10 title. The two teams met twice this year, both wins for the Hornets.

It was a tough pill to swallow for Fort LeBoeuf, which had won all of its games by at least 34 points this season.

On the flip side, Grove City played in the ultra-competitive Region 3 and was in a number of close games.

“To be honest, our mantra is we’re going to focus on us,” Mowrey said. “We knew we played a tough schedule and we were tested down to the final snap all year long. Our last two games went down to the last play of the game. We knew that it was something that maybe went in our favor.

“We had to play some really tough teams and that’s a credit to the teams in our county and our area. And this is coach talk, but we don’t worry about the record or where the game is. We prepare every week the same way. Tonight that resulted in a great game on offense, defense and special teams.”

HERMITAGE, Pa. – The old adage goes its tough to beat a team three times in one season, but Hickory made it look easy in a 51-0 victory over Region 3 rival Slippery Rock in the District 10 Class 3A semifinals.

The Hornets (7-0) limited the Rockets to just 22 yards of total offense in the win.

That defense was on display right from the get-go, recording a safety for the first score of the game and never looking back.

Michael Henwood had another brilliant performance, rushing for 200 yards, including a 77-yard run in the second quarter that, coupled with Jackson Pryts’ 6-yard run in the first made it 16-0.

The Hornets scored again before the half, this time through the air, as Henwood connected with his favorite target, Ramarion Whitehead, on a 20-yard pass to make it 23-0 at halftime.

Hickory poured it on in the second half, as Clay Wiesen scored on a pair of touchdown runs in the third quarter and Henwood capped his stellar night with a short rushing touchdown in the fourth.

The night ended like it started for the Hornets – with a defensive score, as Pryts returned a fumble for a touchdown.

The end result means that Hickory will square up with another opponent for the third time, Grove City, for the D-10 title.

Swaim, Bedford too Much for Clearfield
Goal Line Stand Sends Eisenhower to D-10 Class 1A Title Game; Reynolds Rolls Past Cambridge Springs
This website or its third-party tools process personal data.In case of sale of your personal information, you may opt out by using the link Do not sell my personal information.
×
Manage consent