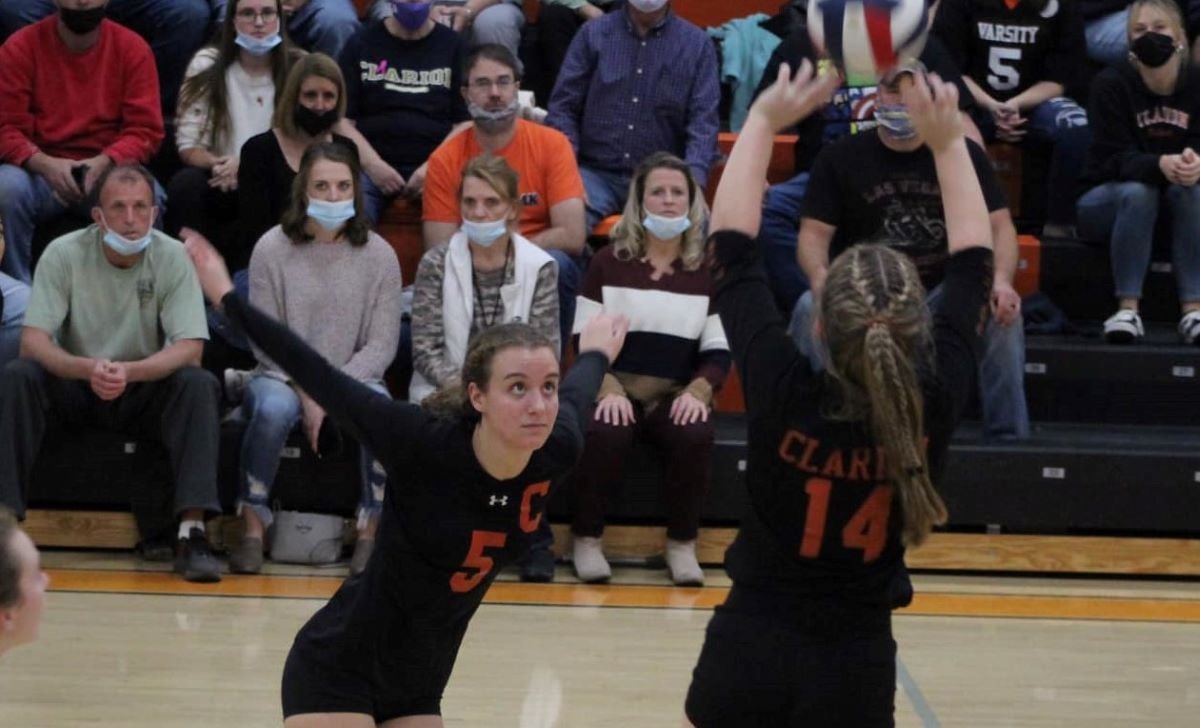 The Lady Cats, the District 9 champion, trailed just once in the three sets (2-1 in the third set) while only being tied four times (1-1 and 2-2 in both the first and third sets) in rolling past the Trojans, who finished third in the WPIAL.

“I just want to celebrate how great these kids are,” Clarion head coach Shari Campbell said. “We’ve got some really athletic kids who have worked really hard. They deserve to enjoy this, and we are going to go after it.”

Clarion spread the offense around with five different players recording at least one kills, including three with at least eight kills.

“It is great to see the diversity of our team,” senior setter Noel Anthony, who had 36 set assists said. “I love using everyone.”

Korrin Burns led the offensive charge for the Lady Cats with 15 kills, while Aryana Girvan added 13 kills while hitting .600. Payton Simko chipped in eight kills and hit .583, as she continued her strong play from the right side over the past three weeks.

“I am super pleased with those three hitters,” Campbell said. “And you saw our middle start to develop. Noel did a really good job of distributing, especially to our middles. That confidence will go far for our middles.”

All three sets were fairly easy for Clarion.

Tied at two in the first set following a reception error, the Lady Cats went on an 11-3 tear to take a commanding 13-5 lead.

Girvan led the way during the run with three kills, while Simko had two.

In the second set, Clarion started on a 4-0 spurt that quickly turned into an 11-3 run.

Grace Ochs had two aces during the start of the run with Adia Needham adding two kills and an ace, and Burns three kills.

In the third set, after falling behind 2-1 and Clarion went on a 9-2 run that featured two kills by Simko and one each by Burns and Girvan, and a block by Taylor Alston.

Jordan Best led the way with seven digs with Ochs and Anthony each adding six digs and Burns five digs.

“We are really able to use kids in different positions, which is pretty amazing,” Campbell said. “They can play different positions in the back row. They have no fear because they are digging Korrin and Aryanna and Payton (in practice). Just to see their adaptability, it makes us very versatile.

The Green Wave, making their first appearance in the PIAA playoffs, who had to make the four-plus hour trip to Bishop Canevin High School, got 13 kills and 19 digs from Jadyn Brabham and seven kills, nine digs, and three blocks from Avaree Kellert.

Abbie Maziarz led Bishop Canevin with 16 kills, while Sani Jones ran the offense for the Crusaders with 36 set assists.

Alyssa Weaver ran the offense for the Lady Panthers with 11 set assists, while Kennedy Kaye paced the defense with 16 digs. Jozee Weaver chipped in four kills.

Claudia Braun also had a double-double for the Talbots with 28 set assists and 12 digs.

Cochranton Wins Thriller Over Homer-Center in Class 1A Volleyball First Round
PIAA Releases Sites, Times for Saturday’s PIAA Volleyball, Soccer Playoff Quarterfinals
We use cookies on our website to give you the most relevant experience by remembering your preferences and repeat visits. By clicking “Accept All”, you consent to the use of ALL the cookies. However, you may visit "Cookie Settings" to provide a controlled consent.
Cookie SettingsAccept All
Manage consent