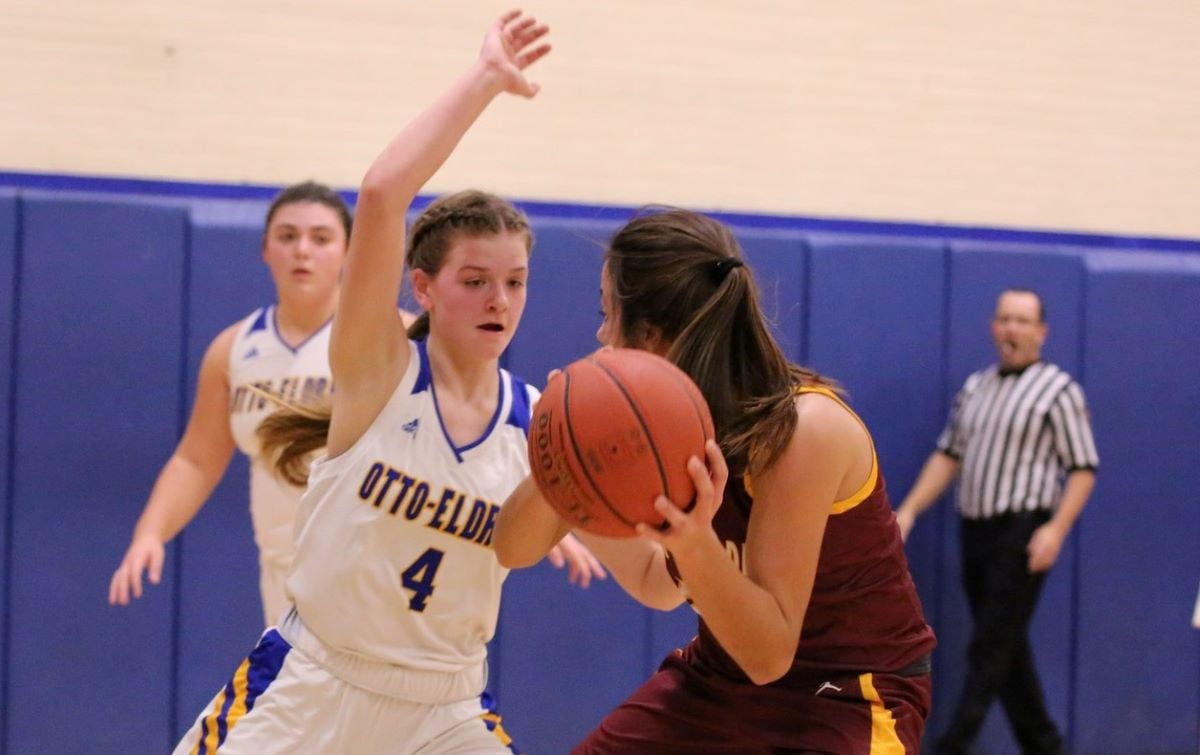 Otto-Eldred was limited to just two first-quarter points and trailed, 6-2, after the first eight minutes before getting back within one, 14-13, at halftime.

Katie Sheeler then hit a pair of 3-pointers and scored seven points in the third quarter to help the Lady Terrors take a 22-20 lead going into the fourth quarter.

Sheeler then hit another 3-pointer while going 5 of 6 from the free-throw line in the fourth quarter to help secure the victory.

“Katie made some clutch free throws down the stretch,” Gray said.

Otto-Eldred also got two big 3-pointers in the fourth quarter from Anna Merry.

“Anna hit some big shots in the second half,” Gray said.

Gray praised the effort of both Heller and Brooke Close as being keys to the victory as well.

“Bri and Brooke led with their all-out effort, as usual,” Gray said.

Natalie Bowser had 17 points for Keystone with Ashlee Albright adding 12.

CLARION, Pa. – Taylor Alston had a double-double to help Clarion to a 39-22 win over visiting Union in KSAC Small School play.

Maura Caskey added 16 points for the lady Dutch who also got nine from Oliva Eckels.

That offset a monster night from Ridgway’s Jenna Kasmierski.

Kasmierski had a game-high 27 points to go with six blocked shots and five rebounds.

Chambers netted a game-high 16 points with Rigas chipping in 14.

Clara Steinberg scored 20 points to lead Eisenhower, 11 of which came in the second half. Bella Marino was also in double figures for Eisenhower with 10 points, while Mackenzie Dunn, Laney Belcher, and Lany Font had seven apiece.

Rebecca Martin had a double-double for Northern Potter with 12 points and 11 rebounds while adding two assists. Reagan Slawson also had eight points and six rebounds for the Lady Panthers.

NoPo will take on North Penn-Mansfield in the consolation game Saturday.

PHILIPSBURG, Pa. – Jaylee Beck knocked down eight shots on her way to a game-high 21 points to lead Harmony to a 44-39 win over Curwensville in the Philipsburg-Osceola Tournament.

Curwensville will face Moshannon Valley in the consolation game Saturday.

The Elkers trailed 32-30 going to the fourth quarter but outscored the Dutch, 11-7 in the quarter behind six points from Sorg, who hit five 3-pointers in the contest.

The win was the first for first-year Ridgway head coach Eric Herzing.

JOHNSONBURG, Pa. – Freshman Maddox Bennett nailed a 3-pointer with about 12 seconds left in overtime to lift visiting DuBois to a 55-53 win over Johnsonburg.

The game was tied at 48 at the end of regulation before Johnsonburg took a 53-52 lead in overtime on the strength of five Jake Lobaugh points, including a 3-pointer.

But Bennet knocked down the biggest shot of his young career to give the Beavers the lead for good, and Johnsonburg missed a late shot that would have given it the win.

Tyson Kennis had a monster game for DuBois with 22 points and 17 rebounds with Cam Thomspon adding 14 points and Bennett nine.

Isaiah Jackon tied Kennis for game-high honors with 22 for the Rams with Lobaugh adding 13 and Aaron Myers 12.

PUNXSUTAWNEY, Pa. – Ryen Heigley led a trio of Punxsutawney players in double digits to lift the homestanding Chucks to a 47-42 win over Clearfield in a rematch of last year’s D9 Class 4A title game won by Clearfield.

Zach Presloid and Noah Kleaver each added 11 points for Punxsutawney.

Cole Miller had a game-high 18 points to go with eight rebounds for Clearfield.

Oil City led 23-12 at halftime, but Bradford came storming back, thanks to the play of Jake Franz, who scored 15 of his game-high 16 points in the second half.

Chase Wineberg was also in double figures for Bradford with 14 points.

FOXBURG, Pa. – Trailing by a point heading to the fourth quarter visiting Sharpsville erupted for 17 points in the final eight minutes to get past A-C Valley, 42-36.

The Blue Devils were down 26-25 going the final eight minutes but got 10 points from Liam Campbell to rally for the win.

Beighley scored a game-high 22 points go to with 10 assists, while Rupp had 19 points, 11 rebounds, five blocked shots, and four steals.

Shane Peters also had a nice game for the Gremlins with nine points, nine rebounds, and three blocked shots.

Ethan Merryman had 15 points for Cranberry.

RIMERSBURG, Pa. – In a game highlighted by Gabe Simko’s three-quarter buzzer-beater at the halftime horn, Clarion went on the road and picked up a huge 70-57 KSAC Small School win over Union.

Simko’s horn-beater capped a 30-point second quarter for Clarion, which outscored the Golden Knights 30-12 in the frame to take a 44-26 halftime lead.

Watch the shot from Clarion’s video

Andy Castner added 11 points for the Wolves, who led 41-3 at halftime and 56-3 going to the fourth quarter.

ST. MARYS, Pa. – Colby Nussbaum had 13 points and was one of eight Elk County Catholic players to score in a 61-28 Crusader home win over Kane in AML North play.

WESTFIELD, Pa. – Kadin Logue scored 18 points and Jacob Borden 16 to lead Genesee Valley (N.Y.) to a 52-38 win over Northern Potter in the opening round of the Jack Bush Tournament at Cowaneseque Valley.

The Panthers play Andover0Whitesville (N.Y.) in the consolation game Saturday.