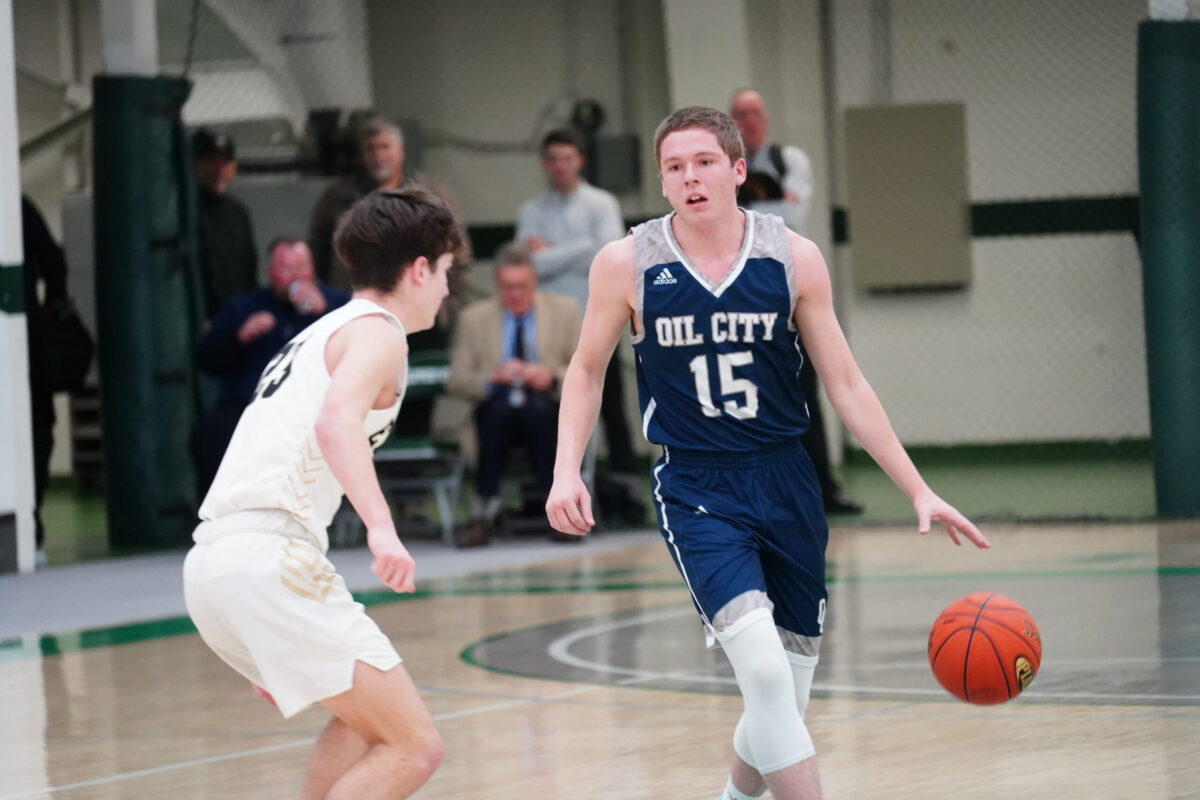 Collin Jones had a monster second half for Saegertown, scoring 17 of his 19 points over the final 20 minutes.

Jones was one of four Saegertown players in double figures, as Brady Greco scored 18 points, Henry Shaffer 14, and Zach Yoder 10. Shaffer was 4-of-4 from the free throw line in overtime.

Schiffer Anderson scored a game-high 23 points for Rocky Grove, including 12 in the fourth quarter and overtime. Evan Wolfgang and Quinn Ritchey were also in double figures for Rocky Grove with 14 and 10 points respectively.

Prep, which led 43-22 at halftime, also got 14 points from Amaree Pickens and 13 from Semontae Lofton, while Mohamed Rahama and Spencer Kanne added eight each.

Konnor Hoffman came off the bench to score a game-high 13 points for Warren, 11 of which came in the first half. Braylon Barnes added seven points for the Dragons.

Oil City led 23-12 at halftime, but Bradford came storming back, thanks to the play of Jake Franz, who scored 15 of his game-high 16 points in the second half.

Chase Wineberg was also in double figures for Bradford with 14 points.

Damon Curry, returning from a one-game absence, keyed the charge for Franklin, scoring all 13 of his points in the first half.

Cole Buckley scored 15 of his game-high 20 points in the second half for the Knights, while Ethan Owens was also in double figures with 10 points.

Logan Kibbe keyed the charge for Seneca, scoring 12 of his team-high 25 points in the second quarter. He drained six 3’s in the game.

Evan Moffett was also in double figures for Seneca with 16 points, while Lucas Rupp and Nolan Seabury added eight points each.

Ronan Dorler had a monster game in defeat for Fort LeBoeuf, pouring in a game-high 27 points, 12 of which came in the first quarter. Carson Papay was also in double figures for the Bison with 11 points.

Ben Swanson had a team-high 15 points for Hickory, one of three Hornets in double figures. Aidan Enoch added 11 points and Rylan Dye 10.

COCHRANTON, Pa. – Slippery Rock outscored Cochranton 22-1 in the third quarter on its way to a 68-34 win.

LINESVILLE, Pa. – Cam Keyser poured in 31 points as Jamestown raced to a 67-51 win over Conneaut.

Carter Williams was also in double figures for the Muskies with 10 points, while Seamus Ford and Lucas Popielarcheck added nine each.

Shakiir Jordan had a big game in the loss for CASH, netting 24 points, while Alex Brady added 10.

FOXBURG, Pa. – Trailing by a point heading to the fourth quarter visiting Sharpsville erupted for 17 points in the final eight minutes to get past A-C Valley, 42-36.

The Blue Devils were down 26-25 going the final eight minutes but got 10 points from Liam Campbell to rally for the win.

John Seyboldt scored a game-high 20 points for Fairview, while Archie Murphey and Jeremy Frazao were also in double figures with 10 points each.

ERIE, Pa. – Isaiah Logvin led a balanced effort with 11 points as McDowell held off Hudson (Ohio) in the first round of the Marsha Marsh Roundball Classic.

A total of nine different McDowell players made their way into the scoring column, as Tyler Grove netted nine points and Blayze Myers and Kamden Kramer added eight apiece.

Dylan McDonald scored 11 of his 13 points in the first half for Girard, while Geremia Dell’omo had 11 points.

Manny Perez had 10 points for Titusville.

Derek Douglas had 12 points, while Garrett Hoffman and Owen Schenker had 11 each for the Tigers, who led 27-11 at halftime.

Nate Miller had 15 points for the Raiders, while PJ Winkle added 11.

Clara Steinberg scored 20 points to lead Eisenhower, 11 of which came in the second half. Bella Marino was also in double figures for Eisenhower with 10 points, while Mackenzie Dunn, Laney Belcher, and Lany Font had seven apiece.

JAMESTOWN, Pa. – Jamestown outscored Rocky Grove 17-0 in the third quarter on its way to a 43-17 victory.

MORGANTOWN, W.Va. – Layke Fields and Monique Vincent scored seven points each, but it was host Morgantown that came away with a 51-30 victory.

SHARPSVILLE, Pa. – Macie Steiner had 14 points and six rebounds as Sharpsville earned a 48-40 win over Mercer.

Chasie Fry had 13 points and dished out four assists for Sharpsville, while Breanna Hanley had eight points and 11 rebounds.

Daryonna Nixon had 10 points for Sharon, while India McGee and Jasmine McGee added eight points each.