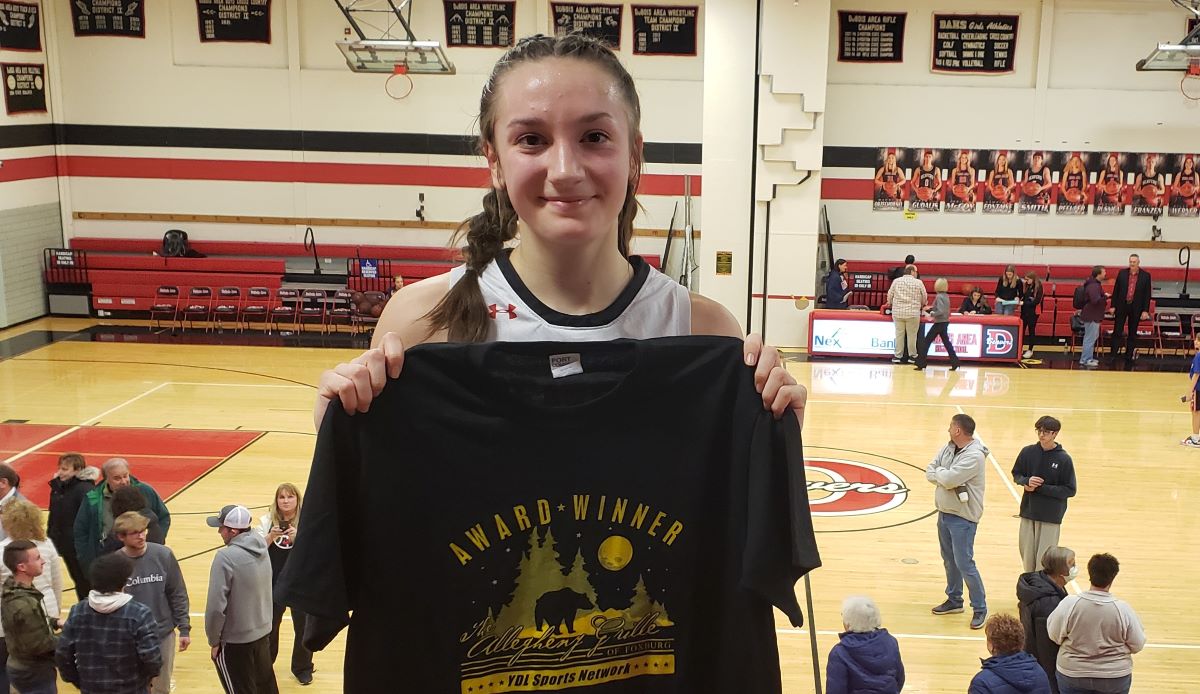 But the Lady Cardinals failed to score another point with DuBois getting the final four tallies of the game.

Madison Rusnica led DuBois with 10 points and was named the Allegheny Grille of Foxburg Player of the Game. She talked about the victory.

Alexas Pfeuffer also added 10 points for the Lady Beavers while hitting a pair of first-half 3-pointers.

Camera Crowley and Malayna Ayers each had seven points for Bolivar-Richburg.

BROCKWAY, Pa. – Trailing by 10 at halftime and eight heading to the fourth quarter, visiting Johnsonburg rallied past Brockway, 43-34.

The Ramettes trailed 23-13 at the break and still were down 32-24 going to the final eight minutes.

But in the fourth quarter, Ella Lindberg scored nine of her game-high 15 points with Maria Casilio adding six of her 11 to help Johnsonburg rally for the victory.

Brockway, which scored just two points in the fourth quarter, got a team-best 13 points from Raegan Gelnette.

Dailey had a game-high 16 points for the Lady Gremlins with Fritch adding 14 points.

TIONESTA, Pa. – Jumping out to a 23-1 lead at the end of the first quarter, North Clarion cruised to a 55-17 win over Forest Area at West Forest.

Huffman netted 12 points in the second quarter to help the Lady Bulldogs to a 37-12 halftime then added 11 more third-quarter points.

Mylee Harmon was also active in a 23-point third quarter for Redbank Valley scoring eight of her 12 points.

YOUNGSVILLE, Pa. – Connor Finch scored 11 of his 15 points in the first quarter as Sheffield earned a 52-43 D9/10 crossover win over Youngsville.

Sheffield led by double digits for most of the second half, with Youngsville getting as close as seven in the fourth quarter.

Finch talked about the win afterward:

Finch was one of three players in double figures for Sheffield, as Leihden Wotorson scored 10 of his 14 points in the second half and Lucas McNeal added 12.

Blake Myers led Youngsville with 15 points, while Levi Hendrickson scored 12 of his 14 points in the second half for the Eagles.

The Cardinals trailed by one, 25-24, at halftime before getting six points from Luke Swisher and five from Ben Gritzer in the third quarter to take a nine-point lead, 42-33 heading to the fourth quarter. .

Andrew Green then scored all eight of his points in the fourth quarter with Marek Hoyt adding six of his team-high 19 points to help DCC hold on for the win.,

Swisher added 14 points in the victory.

HINSDALE, N.Y. – Oswayo Valley made the short ½ trip across the New York state line and came back to Pennsylvania with a 48-22 win over Hinsdale Central (N.Y.).

Dec. 8, 2022 D10 Hoops: Maplewood, Franklin, Greenville Girls Earn Victories
Dec. 9, 2022 District 9 and District 10 Basketball Schedules Powered by Hunter’s Station Golf Club
This website or its third-party tools process personal data.In case of sale of your personal information, you may opt out by using the link Do not sell my personal information.
×
Manage consent