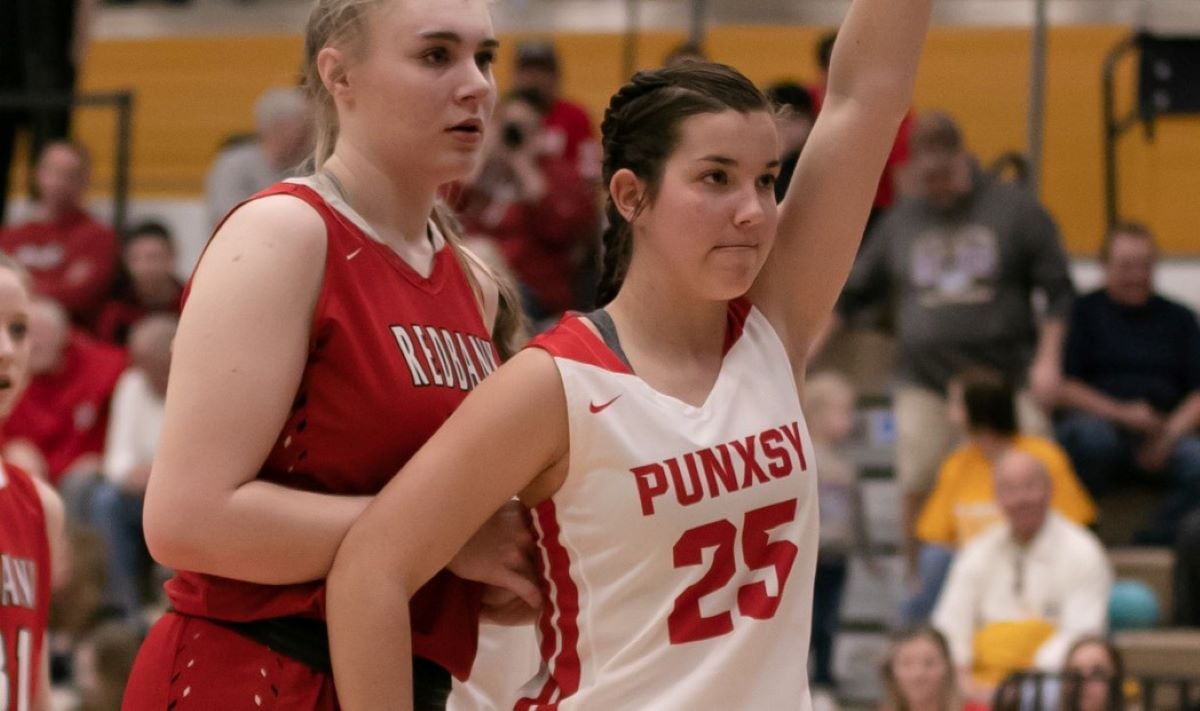 Powell scored four points, had an assist, and a steal in overtime, as the Lady Chucks outscored Lions 9-5 in the extra session.

“I thought she played really well,” Punxsutawney head coach Mike Carlson said. “Avary was in the right spot a lot in overtime.”

United forced overtime when Lauren Donelson scored on a driving layup with 25.5 seconds left in regulation to tie the game at 47.

Samantha Griebel had a runner that was strong with 4.1 seconds left for Punxsutawney.

In overtime, the teams exchanged buckets with Powell giving the Lady Chucks a 49-47 lead before Mollee Fry tied the game at 49.

But Powell, off a pass from Chloe Presloid, put Punxsy ahead for good with 2:32 left in the extra session, 51-49.

Olivia Burkett made the basket happen when she fought for an offensive rebound off a missed Presloid shot, and the ball ended up in the hands of Presloid on the right side of the hoop who passed to an open Powell on the right side for the hoop.

Samantha Griebel knocked the ball away from a United player in the forecourt with Powell diving on the floor to get possession for Punxsutawney on the other side of the center court.

From the floor, Powell was able to push the ball forward to Burkett, who scored.

“We got on the floor a little bit quicker than they did,” Carlson said. “After that sequence, I felt good about our situation.”

The Lady Chucks then made just enough free throws to seal the win.

Ashley Donelson then made one of two for United to make it 55-52, but Presloid hit the second of a two-shot foul with 23.9 seconds left to make it a two-possession game again.

Powell then sealed the victory with a steal with 13.4 to go.

Presloid, despite an off-night shooting (3 of 17) had a double-double for Punxsutawney with 14 points and 13 rebounds while also adding three steals and two assists.

Powell also had a double-double with 11 points and 10 rebounds while adding a steal, and two helpers and Samantha Griebel chipped in 16 points, two steals, and two assists. Danielle Griebel, meanwhile, dished out six assists to go with five rebounds, three steals, and seven points.

Lauren Donelson had a game-high 21 points for United with Fry adding 12.

“We have a lot of experience,” Carlson said. “And in that tip-off tournament (at Warren), we got down doubt digits twice early but then came back and played well late and expanded our lead in both games. I think they were still confident from that.”

FOXBURG, Pa. – Kaylie Rooke had 21 points, seven rebounds, three steals, and three blocked shots as Forest Area moved to 3-0 on the season with a 37-24 win at A-C Valley in the KSAC Small School opener for both teams.

Mackenzie Parks had 10 points and seven rebounds for A-C Valley with Maddy Dehart just missing a double-double with nine points and 10 rebounds.

RIDGWAY, Pa. – A monster night from Jenna Kasmierski helped Ridgway open its season with a 44-31 win over visiting Smethport.

The Ramettes led 31-29 going to the fourth quarter before outscoring the Lady Raiders 18-15 in the final eight minutes behind Stauffer and Emma Myers, who also scored six points in the quarter while going 4 of 4 from the line.

Myers added 10 points in the win with Maria Casilio and Ella Lindberg each scoring eight points.

Eden Wonderling had a game-high 23 points for Brookville.

BRADFORD, Pa. – Brynn Evens and Evin Stauffer each scored 13 points to help visiting Port Allegany to a 47-26 win over Bradford.

Also for the Lady Gators, Ella Moses had nine points and eight rebounds.

Sheeler had a game-high 22 points to go with six assists and five steals.

Fritch had 14 points and 12 steals, while Brooklyn Taylor scored a game-high 20 points for the Lady Gremlins.

Emma Dailey also had a double-double in the win with 12 points and 10 rebounds.

Twenty-four of Harmon’s tallies came before halftime, as the Lady Bulldogs built a 56-1 lead at the break.

Jadyn Shumaker had the lone basket for Cranberry finishing with two points.

Zach Thorwart added 11 points for the Dutch who also got 10 tallies from Anthony Nedzinski and Tyler Mitchell and nine points from Tanner Fox.

Sam Lundeen hit a pair of 3-pointers and added seven tallies for the Wolves.

SHEFFIELD, Pa. – Manning Splain and Landon Francis combined to score 33 points to lift Otto-Elred to a 52-41 road win over Sheffield.

Splain led the Terrors with 17 points with Francis adding 16.

Colby Nussbaum and Michael Jacobs each added eight points for the Crusaders.

Becker scored 10 of his 12 points in the second half on his way to Allegheny Grille of Foxburg Player of the Game honors. He talked about the win:

Brady Berdine was also in double figures for Warren, which led 25-10 at halftime, with 10 points, while Konnor Hoffman added seven.

Tyson Kennis had a career-best 25 points for DuBois.