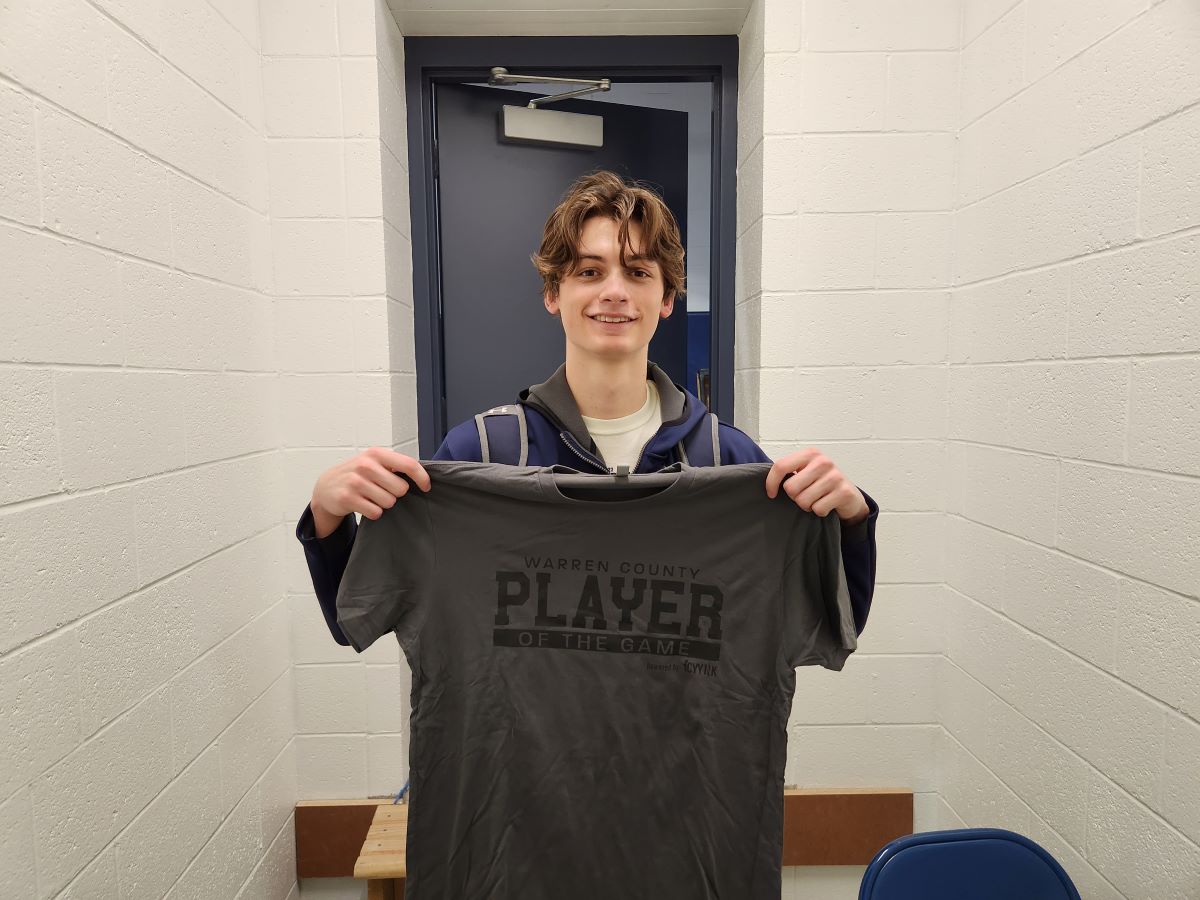 Becker scored 10 of his 12 points in the second half on his way to Allegheny Grille of Foxburg Player of the Game honors. He talked about the win:

Brady Berdine was also in double figures for Warren, which led 25-10 at halftime, with 10 points, while Konnor Hoffman added seven.

Perez was one of three Titusville players that scored at least 20 points, as Isaiah Colon scored 23 points and Andrew Wheeler 20.

The Rockets drained 12 triples in the win, with Hudson Fratus adding 13 points.

Collin Jones led Saegertown with 22 points, including 9-of-10 from the free throw line, while Brady Greco added 21 points and Hank Shaffer 19. Greco drained five threes in the game.

Cam Pence scored five of his team-high 15 points in the fourth quarter for Lakeview, while Evan Reiser scored nine of his 11 points over the final eight minutes.

HADLEY, Pa. – Kyler Black scored 23 points to lead Eisenhower to its first win of the season, 71-57 over Commodore Perry.

Eisenhower led 35-25 at halftime en route to the win.

Johnny Palmieri scored 11 of his 19 points in the second half for Eisenhower, while Kris Bunk was also in double figures for the Knights with 11 points.

Kyle Stringert scored 15 of his team-high 19 points in the second half for Commodore Perry, while Christian Saxe added 17.

NEW WILMINGTON, Pa. – Jake Mattocks scored 14 of his 16 points in the second half as Mercer topped Wilmington, 57-46.

Cole Cunningham scored 12 points for Mercer, including 6-of-6 from the free throw line, while Tre Miller added 10.

Anthony Reed scored a game-high 19 points for Wilmington, while Ben Miller scored all 10 of his points in the second half.

Ronan Dorler had 14 points and Carson Papay 12 for LeBoeuf.

The Hornets built a 40-27 lead after three quarters, holding off a late Boardman rally for the win.

Nick Krahe had another strong game for the Huskies in the win with 10 points.

Nate Edwards added 11 points and JJ Lehman nine for Girard, which outscored GM 27-22 in the second half.

SHARPSVILLE, Pa. – Chasie Fry scored 24 points as Sharpsville picked up its first win of the season, 53-29 over Farrell.

Tori Kimpan added 12 points for Sharpsville, while Lily Palko chipped in with seven.

Alayna Rocco had 10 points for North Catholic, which outscored Kennedy 26-12 in the second half, while Sarah Loughry added nine.

Jamoria Crumby had 10 points and Diavonna Nixon nine for the Lady Tigers.

Lea Miller had 10 points for Reynolds.

RUSSELL, Pa. – In the first meeting of their varsity careers, Clara Steinberg and Riley Robinault put on a show, combining for 44 points. In the end, Steinberg led Eisenhower to a 53-49 win over Youngsville.

The Knights jumped out to a big lead, 18-7 after the first quarter and 32-16 at halftime, but the Eagles defense clamped down in the third quarter to cut the lead to 38-33 heading to the fourth.

Eisenhower pushed the lead back up to eight points early in the fourth quarter, but Youngsville continued to chip away and cut it back down to five midway through the frame.

The two freshmen, Steinberg and Robinault went back and forth all game long. Perhaps no sequence better illustrated that than when Eisenhower had the ball under its own basket with 4:07 to play.

Steinberg then stole the inbound pass, but got tripped up trying to get to the rim and lost control. Robinault got the ball, raced down the court, nearly had the ball poked away, regathered, and banked home a shot.

A little over a minute later, the Eagles cut the lead down to four. The game stayed closely within that margin until the final 38 seconds.

Zaylee Cressley missed a free throw, but Olivia Darling got the rebound and put in a layup to cut the Eisenhower lead to 50-48.

Steinberg was fouled on the ensuing possession and went 2-2 from the line to put the Knights back ahead by four.

Both teams hit one more free throw in the final seconds for the 53-49 margin.

Steinberg had 24 points to lead the Knights. Smyth had eight points and Marino had six.

Jess Messenger added 10 points in the win for Union City.

STONEBORO, Pa. – Brooke Przybylski scored 16 points as Harbor Creek improved to 3-0 with a 45-27 win over Lakeview.

The Huskies rallied from a 23-20 halftime deficit, as Samantha Zank added 10 points.

Emma Marsteller had 10 points for Lakeview and Kyndra Seddon nine.