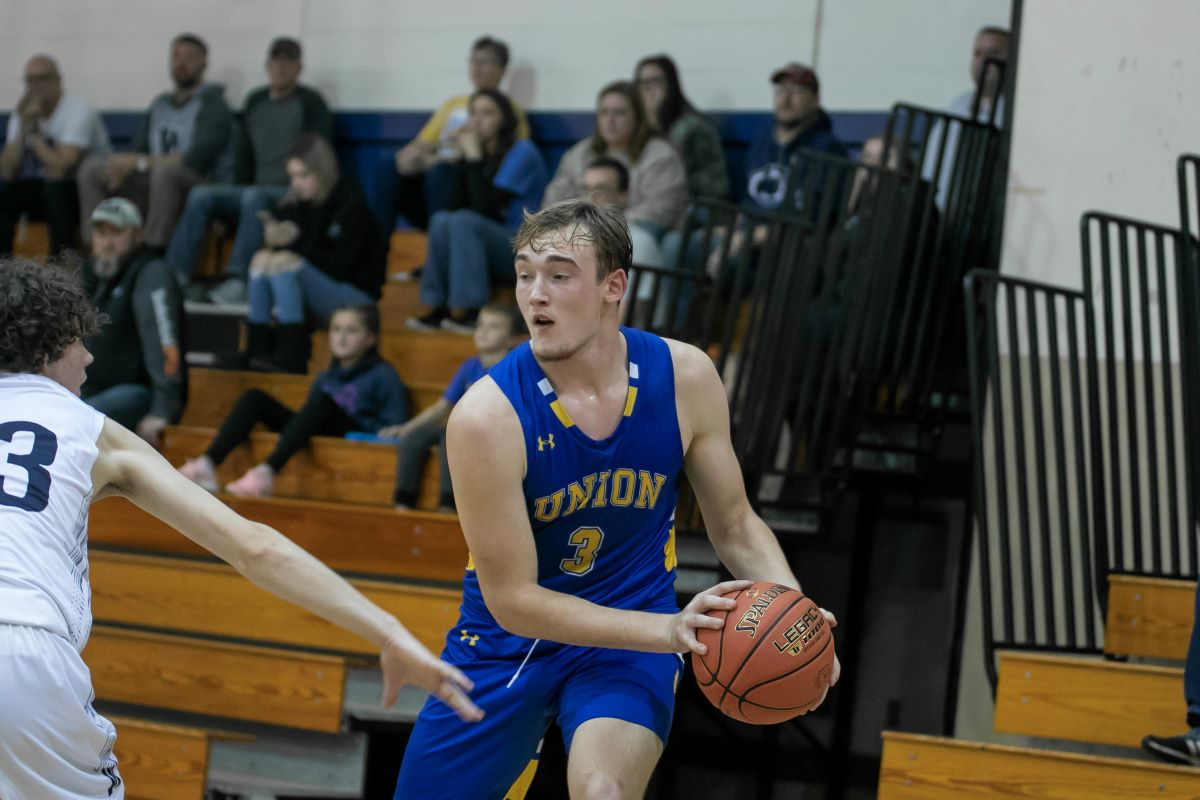 Dawson Camper had a double-double in Union's win. Photo by Jared Bakaysa of JB Graphics.

Payton Johnston had a team-high 15 points to go with four assists for the Golden Knights who also got 11 points, eight rebounds, and three assists from Zander Laughlin.

Aaron Sorg had a game-high 26 points for Ridgway, who fell in the debut of first-year head coach Eric Herzing.

Jack Benninger chipped in 12 points for the Elkers.

Green led the Cardinals with 16 points with Swisher adding 14.

Marek Hoyt also chipped in seven points in the win.

ULYSSES, Pa. – Jack Nolan and Kristian Mizdail combined to score 34 points to lead Williamson to a 57-44 win at Northern Potter.

Nolan tallied 18 points with Mizdail adding 16 for the Warriors.

SMETHPORT, Pa. – Just three days after playing in the PIAA Class 1A football semifinal game, Port Allegany got its basketball season started with a 41-37 NTL win at Smethport.

SHARPSVILLE, Pa. – Garrett Hoffman scored 16 points as Sharon picked up its first win of the season, 66-57 over Sharpsville in non-region action.

Braden Scravel led Sharpsville with 14 points in the loss.

ST. MARYS, Pa. – Syd Alexander scored six of her game-high 17 points from the free-throw line to lead Elk County Catholic to a 52-18 win over visiting Union in its season opener.

Alexander went 6 of 7 from the line while also hitting five shots, including a 3-pointers.

Yanc also dished out 11 assists, while Wheeler had seven rebounds and Hailee Rodgers nine points for the Blue Devils, who led 37-19 at halftime.

CURWENSVILLE, Pa. – Mia Helsel tickled the twine for a career-best 23 points to help Clearfield to a 48-20 win at Curwensville.

COCHRANTON, Pa. – Cochranton outscored West Middlesex 13-5 in the fourth quarter on its way to a 44-36 win.

Eve Pfeiffer scored seven of her nine points in the fourth quarter to lead the rally for Cochranton, while Ella Gallo and Abby Knapka finished with 10 points apiece.

Lena Walz had 17 points and eight rebounds to lead the Ramblers, while Jayden McBride had 10 points and pulled down seven rebounds.