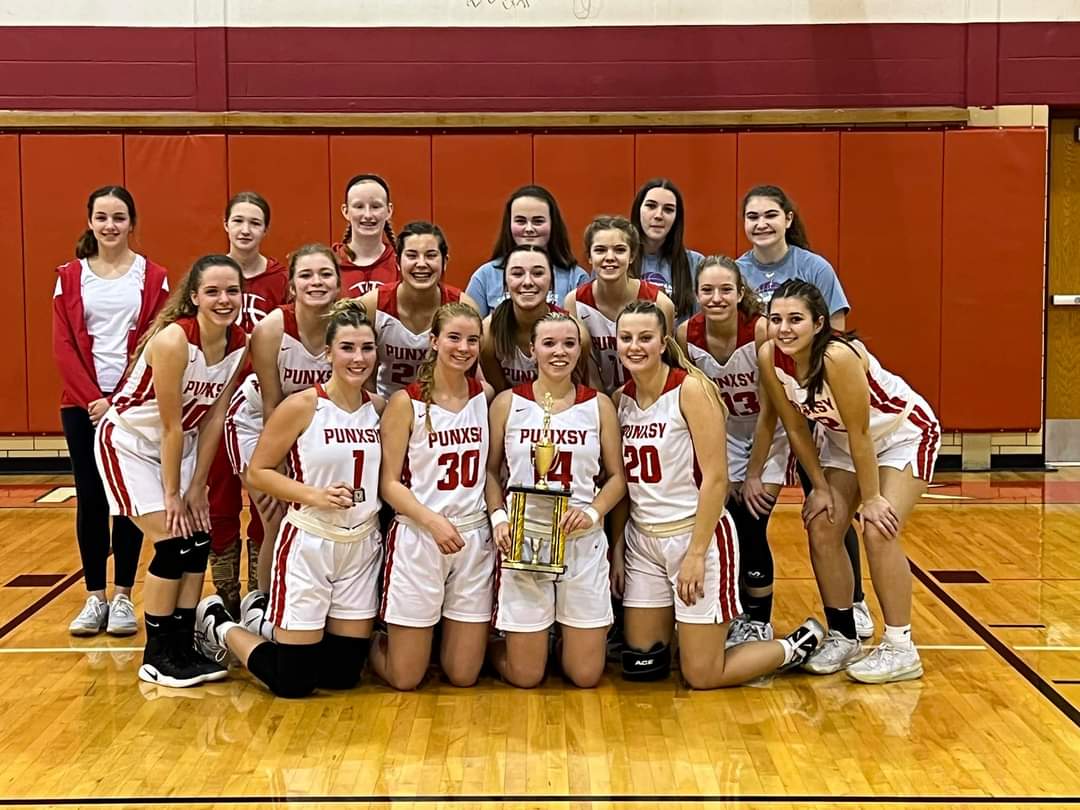 Griebel went 4-of-9 from three-point range, with three of those coming in the first half. Kiersten Riley added eight points and seven rebounds for Punxsy, while Presloid also had six rebounds and five assists and Griebel five rebounds.

Jayssa Snelick went 5-of-6 from the line in the fourth quarter for St. Marys to help seal the win. She finished with a game-high 14 points, while Maura Caskey added eight and Isabelle Caskey and Izzy Catalone six each for the Lady Dutch.

MERCER, Pa. – Moniteau outscored Mercer by 11 points in the second half en route to a 43-29 win in the championship game of the Mercer Christmas Tournament.

Victoria Pry scored nine of her 14 points in the second half, while Davina Pry had nine points and Allie Pry eight.

Delaney Fisher knocked down four triples on her way to a game-high 15 points for Mercer.

BROOKVILLE, Pa. — Alexas Pfeufer came off the bench to score nine of her team-high 11 points in the fourth quarter and sank two free throws in the closing seconds to seal a 46-43 win over DuBois Central Catholic in the championship game of the Brookville Holiday Tournament.

Pfeufer also grabbed eight rebounds and was one of five players off the bench to combine for 20 points in the three-point win. Izzy Geist-Salone finished with 10 points while Madison Rusnica and Sarah Henninger each scored six points. Rusnica was tournament MVP while Pfeufer was also an all-tourney player.

DCC led by as many as nine points in the first half before DuBois climbed back into the game. Faith Jacob and Kayley Risser were all-tourney picks, scoring 12 and 11 points respectively. Jacob added 14 rebounds while Risser finished with 11.

BROOKVILLE, Pa. — Danielle Wood and Selena Buttery combined for 45 points as Brockway staved off foul trouble and dealt the host Lady Raiders a 51-30 loss in the consolation game of the Brookville Holiday Tournament.

Wood scored 24 points, hitting 15 of 21 free throws including 11 of 15 in the fourth quarter, while Buttery had 21 points and 12 rebounds. Both were all-tournament selections.

Brockway dressed just six players and finished with five as Raegan Gelnette fouled out with 10.9 seconds left in the third quarter. Buttery had been on the bench with four fouls since the 2:31 mark of the third, but she re-entered the game and never picked up her fifth which would’ve made the Lady Rovers finish the game with four.

The closest Brookville got in the fourth was 10 points. Elizabeth Wonderling and Eden Wonderling scored nine and eight points respectively to lead the Lady Raiders.

NEW CASTLE, Pa. – Redbank Valley nearly rallied from a 10-point halftime deficit but came up just short against Shenango, 57-54 in the championship game of the Shenango Christmas Tournament.

Shenango, which was led by Kylee Rubin’s 17 points, went just 1-of-10 from the free-throw line in the fourth quarter.

Alivia Huffman led Redbank Valley with 14 points, six of which came in the fourth quarter, while Mylee Harmon netted 11 and Maidson Foringer nine. Huffman and Harmon were both named to the all-tournament team.

Janie Natale had 13 points and Kassidy Peters 12 for Shenango.

The Elkers led 15-10 at halftime and took an 11-point lead after the third quarter.

Annasophia Stauffer had seven points and Cadence Brechtel five for the Ramettes. Kaci Stelene also ripped down 12 rebounds for Johnsonburg.

LINESVILLE, Pa. – Grace Cano poured in 24 points as Greenville earned an impressive 48-44 win over Maplewood in the final of the CASH Christmas Tournament.

Trailing 23-20 at halftime, the Trojans outscored the Tigers by seven in the second half. Sarah Mallek and Reese Schaller added seven points each for Greenville.

MERCER, Pa. – Tay Chester scored 10 points as Sharon earned a 29-18 win over Titusville in the consolation game of the Mercer Christmas Tournament.

Lacey Root added six points for Sharon, which outscored Titusville 16-10 in the second half.

Bri Wynn and Amber Auer had six points each for Titusville.

Conneaut, which led by 11 after three quarters, also got 12 points from Hannah Brady and 11 from Jaelyn Blood.

Carly Richter led a balanced effort for the winners with 14 points, while Jaylin McGill added 13.

Dec. 30, 2021 District 9 and District 10 Basketball Scores
Dec. 30, 2021 D9/10 Boys’ Hoops: Cameron County Outlasts Punxsy in Double Overtime; Girard Rallies Past Greenville
We use cookies on our website to give you the most relevant experience by remembering your preferences and repeat visits. By clicking “Accept All”, you consent to the use of ALL the cookies. However, you may visit "Cookie Settings" to provide a controlled consent.
Cookie SettingsAccept All
Manage consent