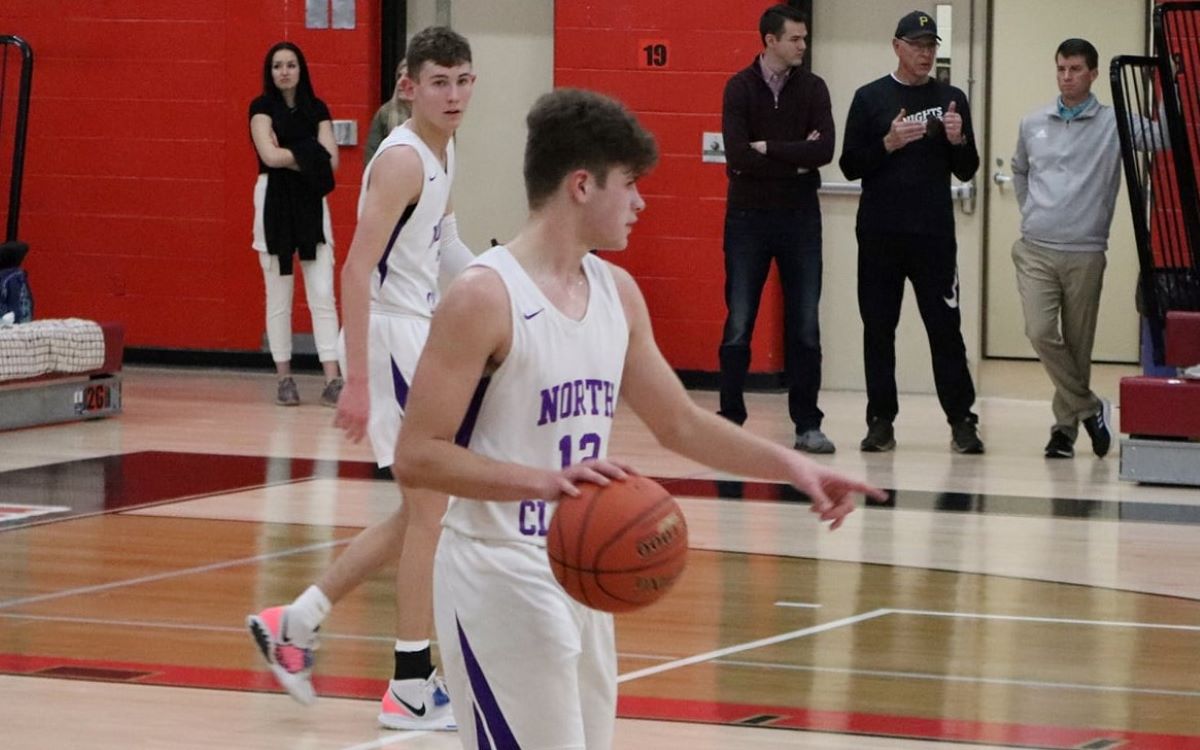 FRANKLIN, Pa. – Collin Schmader knocked down a pair of free throws with four seconds remaining to lift North Clarion to a 59-57 comeback win over Clarion-Limestone.

The Wolves trailed 57-54 when Aiden Hartle knocked down a three with just under 20 seconds remaining to tie the game. A potential go-ahead shot by C-L was blocked on the other end, and a long outlet pass to Schmader resulted in a foul and the game-winning free throws.

The Lions had one last chance, but Hartle stole the ensuing inbounds pass to end the game.

Hartle and Schmader talked about the victory

Clarion-Limestone led by as many as nine late in the third quarter after the game was tied 27-27 at halftime. Kylie Klingensmith led the way for C-L with 15 points, while Ryan Hummell and Bryson Huwar added eight each.

Schmader poured in a game-high 28 points for the Wolves, while Hartle finished with 16 and Cole Byers and Zeelan Hargenrader six apiece.

PATTON, Pa. – RJ Royer’s tip of his own missed shot at the horn in overtime gave Williamsburg a 78-76 win over Clearfield in the opening round of the Cambria Heights Tournament.

Royer had rebounded a missed shot by Lambert Palmer with just under four seconds to play, but his initial layup was no good. He then tipped the follow up, and it went in giving Blue Pirates the victory.

Cole Miller, who had a career-high 46 points, had sent the game to overtime when he was fouled taking a 3-pointer with 5.6 seconds left in regulation and calmly hit all three free throws to tie the game at 67.

After Palmer missed a three at the end of regulation, Clearfield took a 74-73 lead in overtime on a basket by Andon Greslick with around 41 seconds to play.

Miller, who added six rebounds and four assists, then tied the game at 76 with a runner in the lane with 11.6 to play in overtime.

Ryan Gearhart added 18 points in the loss for Clearfield.

Clearfield will play Glendale in the consolation game at noon Wednesday, while Williamsburg will play Cambria Heights in the title game.

FREEPORT, Pa. – Chris Marshall scored a game-high 24 points to lead Redbank Valley to a 63-43 win over Plum on the opening day of the Freeport Tournament.

SHEFFIELD, Pa. – Alex Ognen made 8 of 14 free throws and finished with a game-high 17 points to lead Smethport to a 34-28 win over Sheffield in the opening round of the Sheffield Christmas Tournament.

The Hubbers trailed 22-20 going to the fourth quarter but outscored the Wolverines 14-6 in the final eight minutes thanks to 10 points from Ognen.

SHEFFIELD, Pa. – Landon Darr had 12 points and six rebounds to lead a balanced effort for Kane in a 50-25 win over Youngsville in the opening round of the Sheffield Christmas Tournament.

DUBOIS, Pa. – Led by 11 points from Hunter Geer, nine different Brookville players scored in a 56-38 win over DuBois Central Catholic in the opening round of the DuBois Christmas Tournament.

Alec Srock had a game-high 16 points for DCC with Jalen Kosko adding 10.

But Taite Beighley scored all 12 of his points in the fourth quarter to help Karns City outscored the Golden Knights 18-4 in the final eight minutes to pull away.

DUBOIS, Pa. – Three different players scored eight points each to help DuBois to a 45-14 win over Brockway in the opening round of the DuBois Christmas Tournament.

Dylen Coder hit a pair of 3-pointers and finished with six points to pace Brockway.

PHILIPSBURG, Pa. – Alex Gavlock scored a game-high 21 points to lead Bald Eagle Area to a 57-37 win over Curwensville on the first day of the Philipsburg-Osceola Tournament.

JASPER, N.Y. – Cash Bouton hit five 3-pointers on his way to a game-high 29 points to lead Jasper-Troupsburg (N.Y.) to a 61-33 win over Northern Potter on the first day of the Jasper-Troupsburg Christmas Tournament.

Bret Wingard had a monster game for Keystone with 16 points, 10 rebounds, and seven blocked shots.

MERCER, Pa. – Jaden Wilkins and Brady Greco combined to score 47 points to lead Saegertown past Moniteau, 68-58, on the second day of the Mercer Christmas Tournament.

Wilkins led the Panthers with 24 points, including 10 in the fourth quarter, with Greco adding 23 while hitting five 3-pointers.

Dec. 28, 2021 D10 Boys’ Hoops: Franklin Powers Past Rocky Grove for Tourney Title; Hickory Bests Meadville
Dec. 29, 2021 District 9 and District 10 Basketball Schedules Powered by Hunter’s Station Golf Club
This website or its third-party tools process personal data.In case of sale of your personal information, you may opt out by using the link Do not sell my personal information.
×
Manage consent