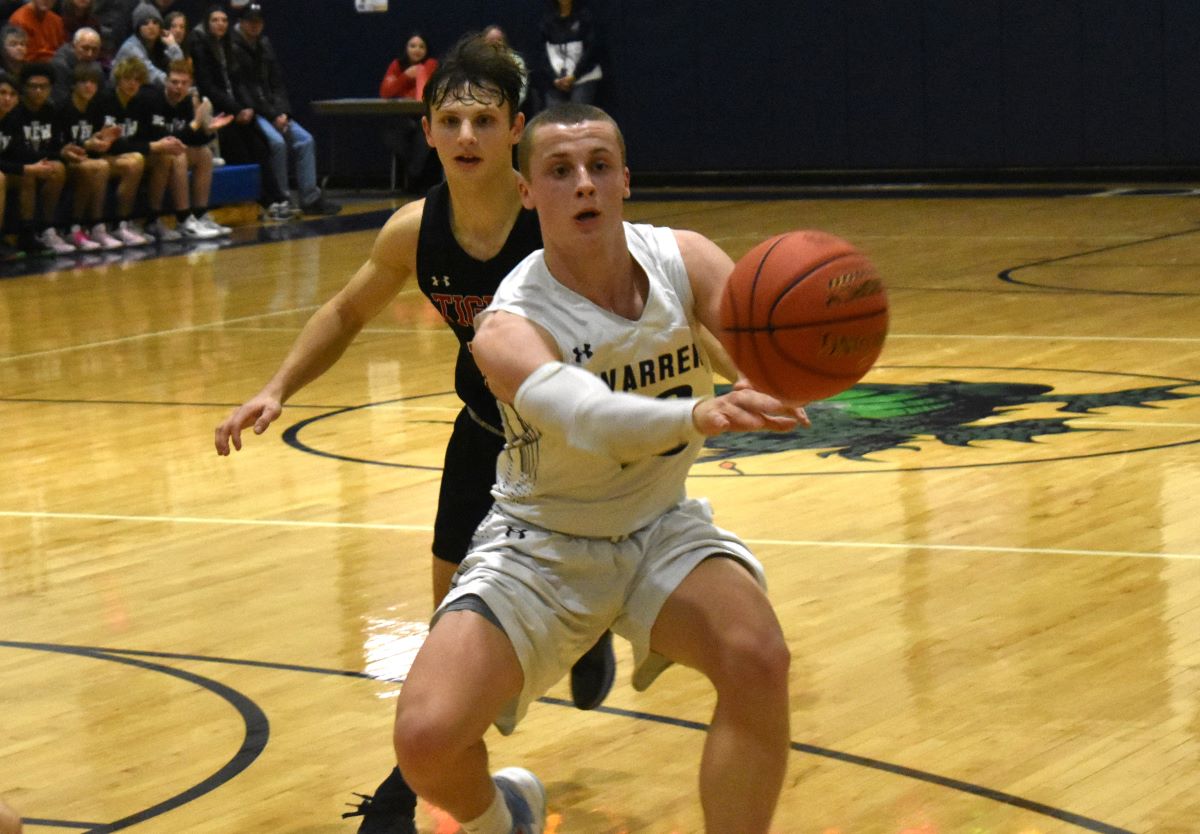 WARREN, Pa. – In a battle between two teams who are quite familiar with each other in recent seasons, Warren drained 12 3’s on its way to a 70-61 win over Fairview.

“I think we’re playing very well,” Warren junior Tommy Nyquist said. “We bounced back from that one loss to Prep with a couple of big wins. We shot the ball well tonight.”

Nyquist led four Dragons in double figures with 18 points, while Braylon Barnes had 17.

The two teams had met five times in the last two seasons, with Fairview holding a 4-1 edge. The one Warren win a D10 quarterfinal win in the 2020-21 campaign.

The teams are in different regions this cycle, however, and with Fairview going down to Class 3A, this marked the only time the two will meet this season.

Warren (5-1) jumped out to a 22-14 lead after the first quarter and led throughout, but Fairview was able to stay within striking distance for most of the game.

Nyquist got off to a hot start offensively, scoring 11 of his 18 points in the first eight minutes, including a drive with five seconds left in the quarter that came on the heels of a Konnor Hoffman lead that extended Warren’s lead to 22-14.

“Fairview has a good team,” Nyquist said. “This is great competition so that when we get into the region we’re ready to compete.”

Fairview, which was coming off its first win of the season over Sharon in overtime, was able to cut the lead to five at halftime thanks in large part to the play of Jeremy Frazao and Archie Murphey.

Frazao drilled a 3 to start the second quarter as Fairview held Warren scoreless for over two minutes. Murphey also drilled a 3 in the quarter and Frazao’s second made it 31-30 with 1:30 to go before halftime.

Warren’s Owen Becker went on a personal 4-0 run to close the half, extending the Warren lead to five.

Parks Ordiway, who was held scoreless in the first half, got hot in the second half, scoring 13 points, including a late third-quarter triple to make it 50-41, with Barnes also hitting a pair of 3’s in the quarter.

A Brady Berdine layup (Berdine briefly exited the game after a hard spill in the third quarter) gave Warren its biggest lead of the game at 58-46 with 5:30 to play in the game.

Fairview went on a 7-0 run, with Frazao hitting one of his three fourth-quarter triples in the spurt to get them back within 58-53 with 3:01 to play. Frazao scored 11 of his 24 points in the fourth quarter.

An Ordiway 3 put an end to that, however, and Barnes and Nyquist combined to go 7-of-9 from the line to seal the Warren win.

Becker made it four Warren players in double figures scoring with 11 points.

“We’re going to work hard tomorrow and get back after it,” Nyquist said.

FRANKLIN, Pa. – Franklin outscored Farrell 21-7 in the fourth quarter to hand the Steelers their first loss of the season, 53-42.

Damon Curry scored nine of his 12 points in the fourth quarter, including a 7-of-8 effort from the free throw line.

The Knights went 28-of-35 from the free throw line for the game, as Jalen Wood and Ethan Owens were also in double figures with 14 and 10 points, respectively, while Cole Buckley added eight.

Nasir O’Kane led Farrell with a game-high 18 points, 13 of which came in the first half, while Lamont Samuels added nine.

KISSIMMEE, Fla. – Cathedral Prep concluded a 3-0 trip with a 57-47 win over Pingree (Mass.) in the championship game of the KSA Tournament Blue Bracket.

Amaree Pickens had 14 points and Jake Sambuchino 11 for the Ramblers, as the duo earned Co-Tournament MVP honors.

Tavion Spencer added 12 points for Prep, which improved to 6-0 overall with the win.

Haydin McLaughlin and PJ Winkle had six points each for Reynolds.

The game was tied 14-14 after the first quarter, with Kane going on a 15-2 run in the second quarter to take control.

Sam Lundeen was also in double figures for Kane with 11 points.

Cochranton outscored Cranberry 17-7 in the third quarter to extend its lead to 20 points en route to the win.

TITUSVILLE, Pa. – Zander Laughlin scored a career-high 33 points to help Union to an 81-51 win at Titusville.

Laughlin was 14 of 27 from the field, including 5 of 8 from 3-point range. Laughlin added nine rebounds and three assists.

Manny Perez had 17 points for Titusville with Isaiah Colon scoring 11.

KISSIMMEE, Fla. – McDowell outscored Fouke (Ark.) 17-4 in the second quarter on its way to the KSA Tournament Red Bracket title with a 48-37 win.

Jessica Hetz was named Tournament MVP and scored 15 points in the win.

Mercedes Feronti was also in double figures for the Trojans, who improved to 7-0, with 10 points.

CASH outscored Fort LeBoeuf 33-26 in the second half, as Morgan Poff had 13 points and Lainie Harrington had 12.

HERMITAGE, Pa. – Hickory outscored Farrell 32-11 in the second and third quarters on its way to a 54-34 win over Farrell.

Damerra Thomas and Janiya Daniels had nine points each for Farrell.

NORTH HUNTINGDON, Pa. – Kate Botti had 15 points and Ava Kobus 13 to send Norwin to a 53-29 win over Kennedy Catholic.

Tori Kimpan had 12 points and Lily Palko 11 points for Sharpsville.

GIRARD, Pa. – Eleven different Maplewood players made their way into the scoring column in a 53-13 win over Girard.

Dec. 22, 2022 Luton’s Plumbing, Heating, AC Wrestling: Brookville, Port Allegany, Greenville Among Winners
Dowelling it Home: Dowell’s Putback at the Horn Give Port Girls a Victory; Moniteau Boys Edge Clarion Dec. 22
This website or its third-party tools process personal data.In case of sale of your personal information, you may opt out by using the link Do not sell my personal information.
×
Manage consent