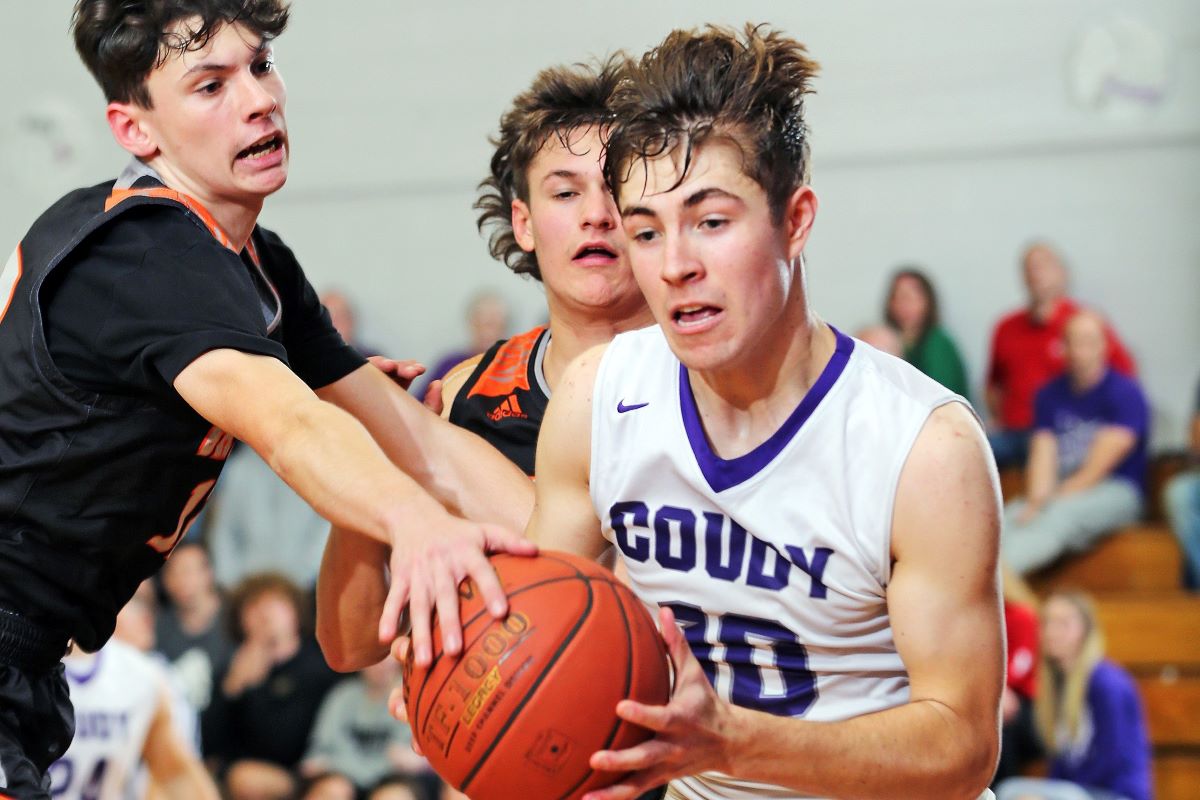 COUDERSPORT, Pa. – Garrett Kellert went 4-for-4 from the free-throw line in overtime and scored eight of his 13 points in the extra period to help Coudersport knock off visiting Port Allegany, 59-53.

Coudersport led 36-30 going to the fourth quarter before needing a 3-pointer by Brady Streich late in regulation to take a 45-43 lead.

Blaine Moses, however, hit a late layup to tie the game at 45 before the Falcons missed a 3-pointer at the buzzer.

Kellert, though, took over in overtime scoring eight of the 14 Coudersport points.

Logan Ruter and Streich joined Kellert in double digits with 14 points each, while Christian Furman and Mason Roesner each added eight points.

The teams were tied at 31 at the end of regulation before Bradford got a basket from Dalton Dixon and Ridgway two free throws from Dan Park in the first overtime to go to the second overtime tied at 33.

Dixon then made 3 of 4 free throws in double overtime, and Jake Franz made 4 of 6 while Ridgway didn’t score.

Franz scored a game-high 21 points for the Owls with Cam Austin adding six and Dixon five, all in the overtime sessions.

KARNS CITY, Pa. – Using a quick start, Redbank Valley went on the road and made a statement that it is the team to beat in the KSAC Large School Division with a 59-39 win over shorthanded Karns City.

Marquese Gardlock hit three 3-pointers and scored 11 of his 14 points in the first quarter to help the Bulldogs take a 24-9 lead after eight minutes of play.

The advantage grew to 19 points, 34-15, by halftime, and despite Karns City’s attempt to rally in the third quarter when it outscored the Bulldogs 17-8 to get back within 10, 42-32, the early deficit proved to be too much to handle.

The Gremlins were without their second-leading scorer Micah Rupp (9.8 ppg), who is also one of the top rebounders for Karns City.

FRILLS CORNERS, Pa. – Leading by just five at halftime, North Clarion used a 12-0 run at the start of the second half to open up a double-digit lead and never looked back on its way to a 52-40 win over A-C Valley to claim the top spot in the KSAC Small School Division early in the season.

The Wolves led 31-26 at the break but got a 3-pointer from Aiden Hartle early in the third quarter to kick start the key spurt that didn’t end until a Jay Clover basket with just over three minutes left in the quarter.

The 3-pointer started an 11-point second half for Hartle, who was held scoreless in the first half.

But Hartle wasn’t needed in the opening 16 minutes thanks to Josh Daum, who scored the first 10 points of the game for North Clarion on his way to a game-tying-best 18 points. He was named the Allegheny Grille of Foxburg Player of the Game.

Daum talked about the victory

Cole Byers and Collin Schmader each added eight points in the win with Schmader also handing out six assists, coming away with four steals, and grabbing six rebounds, and Byers adding nine rebounds.

Finch led the Wolverines with 25 points with Richards adding 20.

Isaiah Jackson added 10 points for the Rams with Aaron Myers chipping in eight.

Jimerson led the Terrors with 17 points and 13 rebounds while adding six assists.

Shene Thomas added 16 points and eight rebounds in the win with Manning Splain hitting four 3-pointers on his way to 13 points and four assists, and Austin Cousins chipping in 11 points, four rebounds, and four steals.

Cayden Black and Ian Bilski combined to score 29 of Oswayo Valley’s 36 points with Black leading the Green Wave with 15 and Bilksi adding 14.

AUSTIN, Pa. – Hayden Brown scored all but six of his game-high 21 points in the first half to lift visiting Cameron County to a 48-20 NTL win over Austin.

Jacob Bartoo had for points, while Gary Bliss and Nolan Smith had three each.

KNOX, Pa. – Clarion-Limestone’s Rylie Klingensmith hit a short jumper with 28 seconds left to break a 53-all tie, and the Lions went on to beat homestanding Keystone, 59-53, in KSAC Large School Division play.

Even after Klingensmith’s jumper, the game remained a 2-point game until Tommy Smith and Jordan Hesdon each hit a pair of free throws in the final four seconds.

That allowed C-L to hold off a late charge by Keystone, which trailed by 12 early in the third quarter before cutting the deficit to one, 36-35, going to the fourth quarter.

Bret Wingard had a double-double for Keystone with 16 points and 10 rebounds scoring 10 of his points from the free-throw line, including going 9 of 9 from the line in the second quarter.

Tyler Albright chipped in nine points for the Panthers.

Ryan Jewart chipped in 17 points while hitting four 3-pointers for the Warriors, while David Dessicino had a double-double with 13 points and 10 rebounds.

Dec. 21, 2021 D10 Boys’ Hoops: Erie First Rallies Past Eisenhower; Franklin Puts up 92 in Win
Dec. 22, 2021 District 9 and District 10 Basketball Schedules Powered by Hunter’s Station Golf Club
We use cookies on our website to give you the most relevant experience by remembering your preferences and repeat visits. By clicking “Accept All”, you consent to the use of ALL the cookies. However, you may visit "Cookie Settings" to provide a controlled consent.
Cookie SettingsAccept All
Manage consent