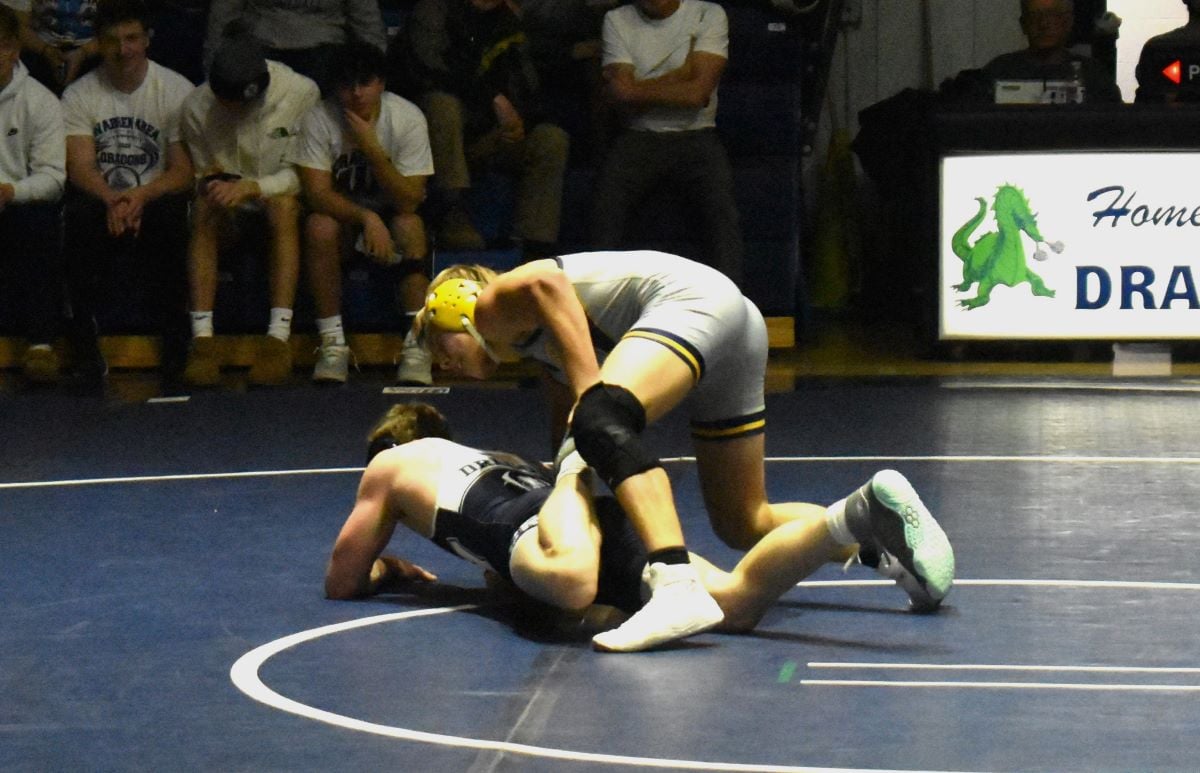 WARREN, Pa. – Eisenhower and Warren teamed up to “White Out” cancer in Tuesday’s match, and on the mat, it was a competitive 42-30 win for Eisenhower.

“It’s really special because I know my brother is up there looking down,” Johnson said. “I get to give him grief at the Christmas table this year, even though he’s up there.”

On the mat, the Dragons jumped out to an early lead, capped by Grant Heeter’s 12-10 decision over Shawn Pascuzzi at 152 pounds.

Heeter and Pascuzzi were named Players of the Match.

Heeter’s win was followed by three consecutive pins, for Eisenhower, however beginning with Cam Jakubczak’s first-period fall over Kenny Pizarro at 160.

Tucker Lindell (172) and Benji Bauer (189) followed with pins of their own, and after Ike’s Brok English won via forfeit, Michael Vanetta got the final pin of the night for Eisenhower at 285.

Johnson expressed the gratitude the young men showed both on the mat and in the fight against cancer.

“When you’re doing something against cancer, I think they really look at it as a positive thing,” Johnson said. “And that’s what we’re trying to teach our kids, to be empathic and that sort of thing. And it was a lot of fun.”

Ryan Fitzsimmons closed out the match for Warren with a major decision (11-2) at 114, with the Dragons having some big performances of their own.

Also for Eisenhower, Cole Kellogg got a pin over Trentin Anthony at 133.

“These kids all know each other and even practice together,” said Eisenhower coach Jared Lindell, who picked up his first win as head coach. “But when it comes down to going toe-to-toe, we put that out of sight and compete.”

HYDE, Pa. – Clearfield won seven matches by pin and five more by forfeit in a 76-0 win over Hollidaysburg.

Micah Rodriguez (114) and Kolton Sutter (139) won by pin for Northwestern, while Sebastian Chiesa (133) got a decision.

Greenville also got a decision win from Teague Calvin at 189 and a pair of forfeits.

YOUNGSVILLE, Pa. – Union City got five pins in a 42-21 win over Youngsville.

Daylend Schlosser won via major decision at 127 for Cochranton.

FLINTON, Pa. – Curwensville got pins from Dylan Deluccia (133) and Logan Augenbaugh (160) but dropped a close 33-31 match to Curwensville.

Glendale got two pins and three forfeits in the win.