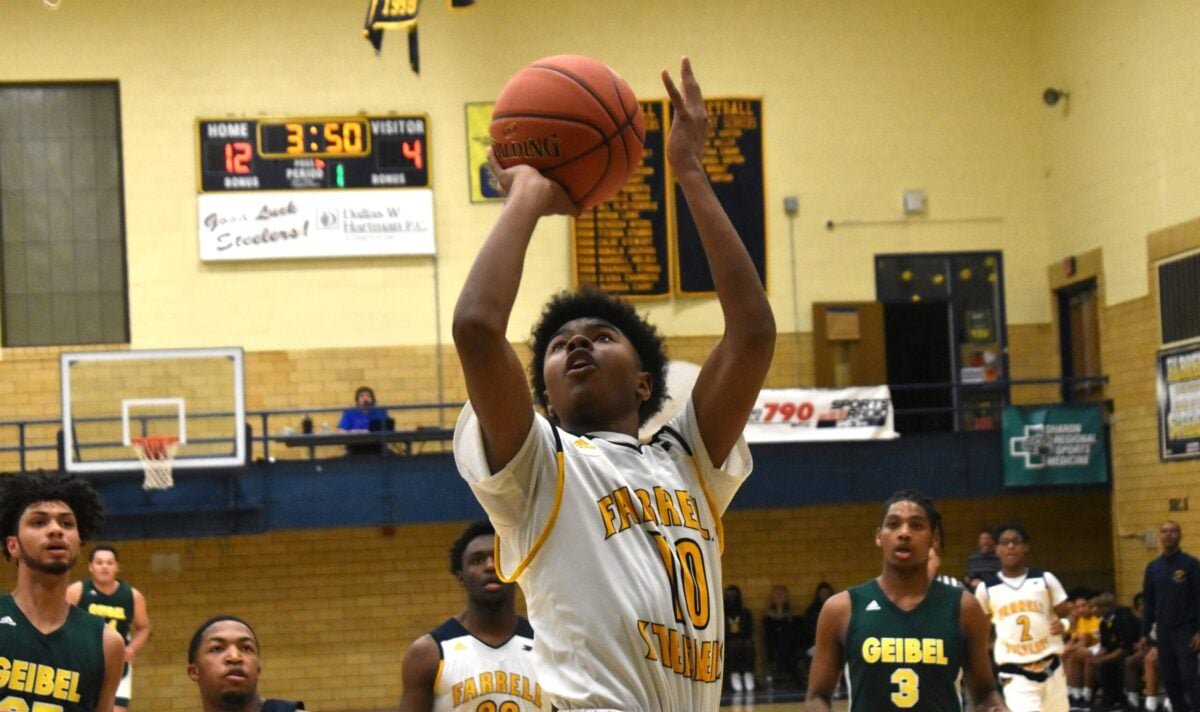 FARRELL, Pa. – Behind a 30-18 fourth-quarter surge, Farrell picked up a huge win over WPIAL power Aliquippa.

Nasir O’Kane and Kylon Wilson scored 15 points each, with Kane having a monster fourth quarter to key the Steelers’ comeback. Kane scored 10 of his 15 points in the fourth quarter and was also 5-of-6 from the free throw line over the final eight minutes.

The 30 points in the fourth quarter were more than Farrell had scored in the game up to that point, as they trailed 33-26 going into the fourth.

Malachi Owens and Danny Odem also had big fourth quarters. Odem scored nine of his 11 points during the comeback and Owens eight of his 10 for the Steelers, who improve to 3-0 with the win.

Mason Vannoy scored 13 points for the Trojans, who had a season-high in points, while Nathan Stuyvesant had 11.

Laban Barker scored a game-high 27 points for Laurel, while Greg Preisser had 17.

PITTSBURGH, Pa. – Shaler scored 27 points in the first quarter, earning an early 14-point lead on its way to a 72-46 win over Grove City.

Nathan Greer and Brett Loughry had 13 points each for Grove City, while Gavin Lutz added 12.

Tyler Grove led the Trojans with 16 points, including a pair of triples, with Jacob Banks drilled four shots from distance and finished with 12 points.

Joey Dopirak added 10 points for North Allegheny, which earned its first win of the season.

Shene Thomas added 17 points and five rebounds for the Terrors with Manning Splain picking up 12 points, all in the fourth quarter, four rebounds, and three assists.

Also for the Gators, Blaine Moses had eight points and eight rebounds.

Martin had a game-high 21 points to go with 13 rebounds with Cady adding 12 points and 10 rebounds.

Kayden Brown handed out 10 assists while adding four points for the Lady Panthers, and Reagan Slawson had four points and four steals.

HOLLIDAYSBURG, Pa. – Alison Hatajik and Sydney Lear each scored 14 points to help Hollidaysburg to a 60-31 win over visiting Clearfield.

SHEFFIELD, Pa. – Warren got off to a bit of a slow start during its second game in less than 24 hours, but an 11-3 run and stifling defense helped propel the Dragons to a 62-50 win over DuBois Central Catholic at Sheffield High School.

Warren was coming off a heartbreaking 43-41 loss to Erie on Friday night. With a minute to play in the first quarter, the Cardinals held a 17-10 lead.

Warren parlayed that run into a 37-31 halftime advantage.

DCC opened the third quarter with a 6-0 run, with Kayley Risser scoring all six points, to tie the game at 37-37 less than two minutes into the second half.

The Cardinals wouldn’t score again until Lexi Berta hit a 3-pointer 37 seconds into the fourth quarter.

Peyton Wotorson’s three ended DCC’s third-quarter run and started a 14-0 run for the Dragons. Warren pushed the advantage to 20, 60-40, early in the fourth quarter before pulling back to a clock-killing offensive game plan.

The game was played at Sheffield since the Wolverines play in a co-op with the Dragons.

Faith Jacob had a game-high 20 points for the Cardinals. She scored 18 of her 20 points in the first half. Risser was also in double figures with 14 points, and Berta had nine points.

“We just work as a team, best as we can, driving lanes, and kicking out whenever we can,” Farr said of the Dragons’ balanced offensive attack this season.

Sammie Ruhlman had eight points, eight rebounds, and seven assists. After being held scoreless for two games, leading scorer Peyton Wotorson hit a pair of threes to help her finish with seven points.

FAIRVIEW, Pa. – Hope Garrity scored 11 points as Fairview turned in a dominant defensive effort in a 50-6 win over Corry.

Garrity scored nine of her 11 points in the first half, while Emma DiStefano had 10 points and Sara Gennuso, Bre Heidt, Jillian Agnello and Riley Sholes all had six points.

Bella Dibble scored eight of her 11 points in the second half to lead a balanced GM effort.

Libby Opp chipped in with nine points and Holly Shreve and Bailey Cannon eight each for the Lancers.

ALBION, Pa. – Conneaut outscored Northwestern 46-41 in the fourth quarter on its way to a 46-41 victory.

Hannah Brady had a big second half for CASH, scoring 16 of her 17 points over the final 16 minutes.

Lainie Harrington had a double-double in the win with 14 points, 11 rebounds, and two assists, while Eliza Harrington had 12 rebounds and three assists. Brady also had five boards and Kaitlyn Crabb three steals.

ERIE, Pa. – Jessica Hetz knocked down a pair of free throws with three seconds remaining to lift McDowell to a 45-43 win over State College.

Hetz had eight points in the game, part of a balanced effort for the Lady Trojans, who improved to 4-0 with the win.

Francesca Russo had 10 points to lead the way for McDowell, while MercedesFeronti added nine and Caylen Spano and Amaiya Nelson eight each.

NEW CASTLE, Pa. – Sharpsville’s Chasie Fry scored 20 points, but it was Laurel that came away with a 50-37 victory.