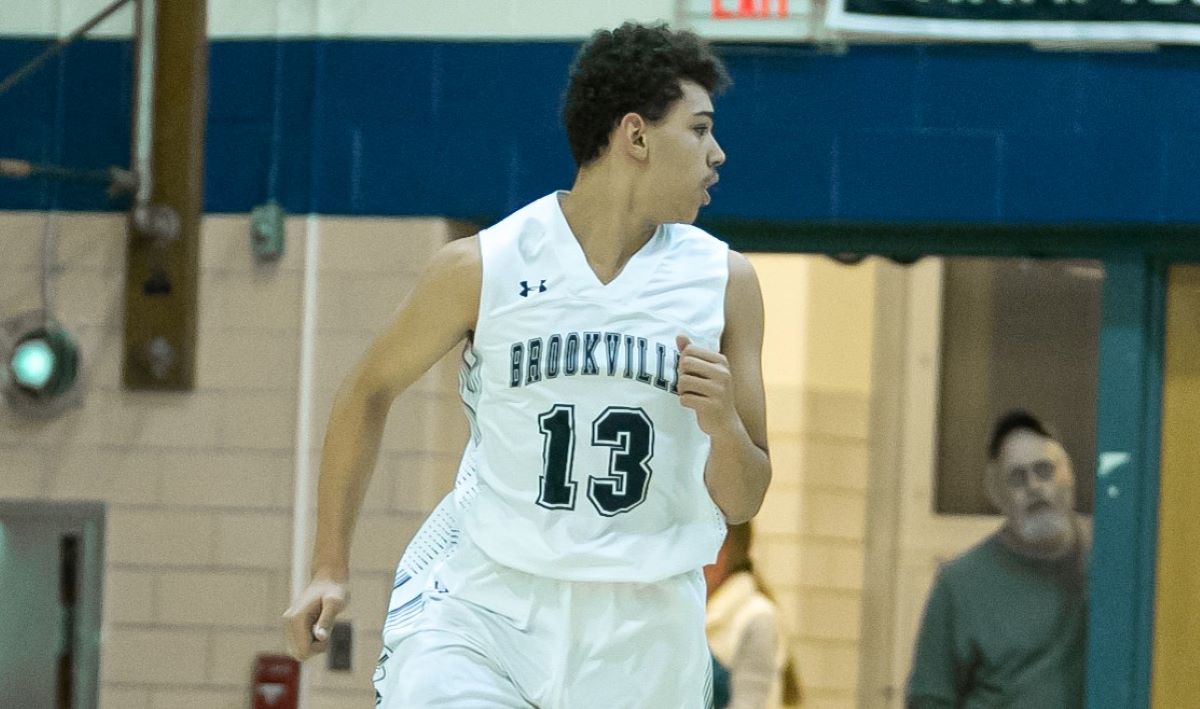 BROOKVILLE, Pa. – Getting two big offensive rebounds and put-backs late in the fourth quarter from Clayton Cook and Griffin Ruhlman, Brookville held off an undermanned Elk County Catholic squad, 56-50, in the D9 League opener for both clubs in Brookville.

The Raiders, who had lost 17 in a row to the Crusaders, led 28-18 at halftime but watched ECC cut the deficit to 37-31 going to the fourth quarter.

But Brookville, who hadn’t beaten ECC since 2010-11 season, still seemed in control with a 45-37 lead with around five minutes to go when the Crusaders went on a quick 6-0 spurt thanks to back-to-back old-school 3-point plays to get within two.

First, Luke Jansen grabbed an offensive rebound, scored, and was fouled to make it 45-40.

Then, Charlie Breindel stole a Hunter Geer pass and ended up on a fast-break layup following a pass from Adam Straub. He scored and was fouled by Geer and hit the free throw to make it 45-43 with 4:25 left.

That’s when Brookville’s offensive rebounding made a difference.

After a missed shot by Ruhlman, Clayton Cook cleaned up the boards and scored to make it 49-45.

Cook then blocked a Luke Jensen shot at the other end before Danny Lauer was fouled.

Lauer missed the free throw, but Ruhlman got the offensive board, scored, was fouled, and hit his free throw to make it 52-45.

The teams traded baskets with Breindel scoring for the Crusaders and Lauer for Brookville to leave the score at 54-47.

ECC had one last gasp, as Michael Jacobs hit the first of two free throws to make it 54-48. He missed the second one, but Jansen got the rebound, and Breindel scored on a layup to make it 54-50.

Breindel was fouled on the play, which came with about 25 seconds left, and had a chance to make it a one-possession game but missed the charity shot.

Ian Pete then hit a pair of free throws at the other end to seal the victory.

Lauer, who scored 10 of his points in the second half, and Ruhlman led Brookville with 12 points each.

Laur, who was named the Allegheny Grille of Foxburg Player of the Game, talked about the victory.

Cook added a double-double for the Raiders with 10 points and 11 rebounds, while Pete also scored 10 points and Geer eight points.

Jansen had a game-high 19 points for ECC, including 12 after halftime, while Jacobs added 13 and Breindel 11. The Crusaders went most of the night with only its starting five playing with James Foradora getting a couple of minutes to spell some of those starters.

KNOX, Pa. – Trailing by 15 going to the fourth quarter, Keystone got 12 combined points from Zander McHenry and Bret Wingard to rally past visiting Moniteau, 47-44, in KSAC Large School play.

The Panthers trailed 42-27 going to the final eight minutes, but outscored the Warriors 20-2 in the quarter.

Wingard finished off a double-double with 10 rebounds, while McHenry added eight rebounds.

Kosko scored all six of his points in the final eight minutes with Green adding five of his eight in the fourth quarter to help the Cardinals outscore Brockway 21-10 in the quarter to overcome a 31-28 deficit after three.

Jared Marchiori and Noah Adams each had 11 points for Brockway.

CLARION, Pa. – Clarion built an 18-point halftime lead and then held off a second-half charge by Union to pick up a 63-60 home KSAC Small School victory.

The Bobcats led 39-21 at halftime but watched Union ride the hot hand of Caden Rainey and Skyler Roxbury to outscore them 26-11 in the third quarter and get back in the game.

Rainey scored 12 of his game-high 26 points in the third quarter with Roxbury adding nine of his 12.

Christian Simko scored a team-best 21 points for Clarion, including six in the fourth quarter to help hold off Union. Simko also had six steals.

Gabe Simko added 13 points for the Bobcats with Dawson Smail recording a double-double of 12 points and 11 rebounds. Devon Lauer also had nine points and five assists.

SHINGLEHOUSE, Pa. – Jacob Hooftallen had a double-double of 15 points and 13 rebounds to lead visiting Austin to a 38-30 win over Oswayo Valley in North Tier League play.

Cameron Rees added 10 points for the Panthers, who trailed by one, 24-23, going to the fourth quarter but got seven points from Adam Lucas and six from Hooftallen to rally for the win.

Lucas added nine points for Austin, while Dawson Hooftallen grabbed 10 rebounds to go with one point.

Parker Wood added 14 points for the Golden Tide, who led 44-18 at halftime, and Danny McGarry chipped in 11 points.

HOLLIDAYSBURG, Pa. – DuBois nearly overcame an 11-point deficit going to the fourth quarter, but came up a point short in a 77-76 loss at Hollidaysburg.

The Beavers trailed 61-50 at the end of the third quarter after Hollidaysburg outscored them 26-17 in the quarter.

But behind 11 points from Cooch Husted, DuBois got itself back in the game in the final eight minutes.

GALETON, Pa. – Hayden Brown scored a game-high 21 points to lead Cameron County to a 64-16 win at Galeton in NTL action.