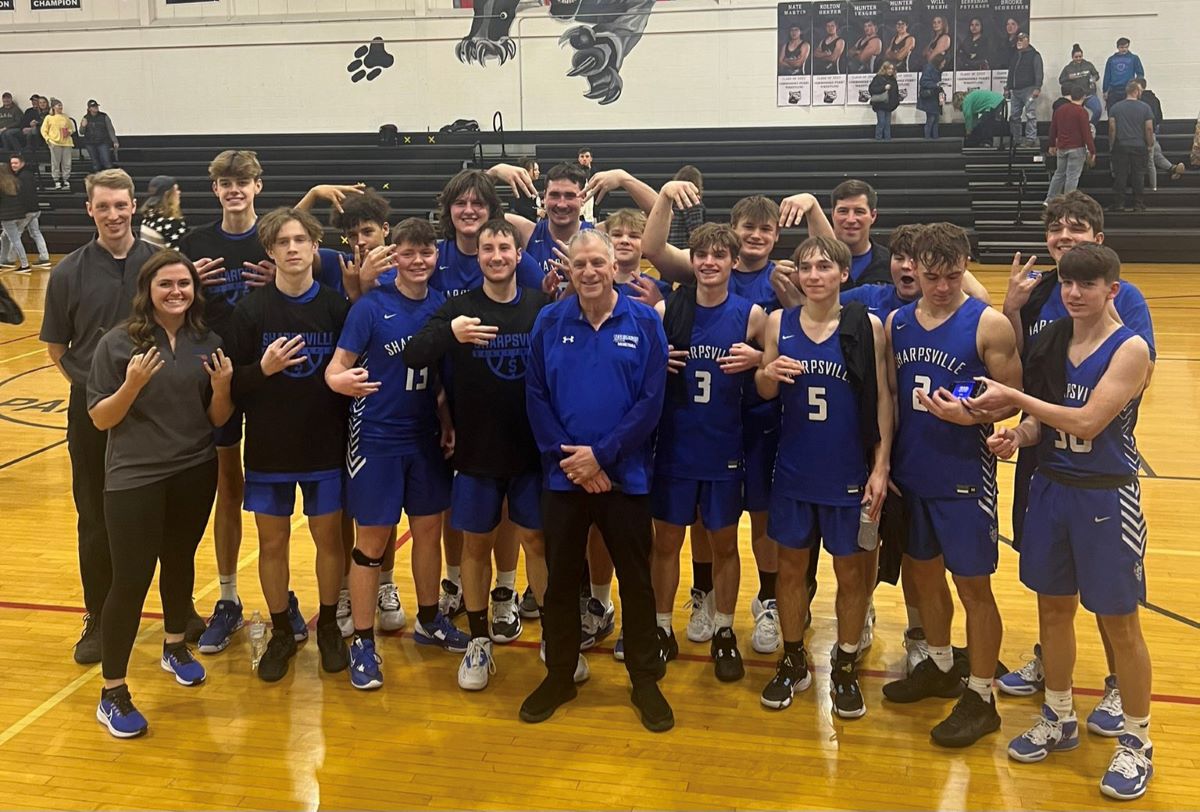 Williams won five District 10 titles as head coach of the West Middlesex girls’ basketball team, and before that was the head boys’ coach at both Mercer and A-C Valley.

It was the second win of the season for Sharpsville, with Williams in his first season at the helm.

In the win, Braden Scravel poured in a game-high 25 points, as the Blue Devils built a 35-27 halftime lead and extended the margin to 16 after three quarters.

Koval was previously the coach at Central Tech before Tech, Erie East and Strong Vincent combined to form Erie High.

As a high school player, Koval was a standout for the Brockway Rovers in the 1990s, helping them to three consecutive District 9 titles (1993-95) and advanced to the PIAA quarterfinals twice.

In the win over Allderdice, the Royals jumped out to a 17-9 lead after the first quarter and led throughout.

The Eagles had three shots to take the lead late but were unable to convert.

Tanner Ashton scored six of his 11 points in the fourth quarter for the Lakers, while Dave Bahm finished with 12 points.

Brett Loughry led Grove City with a game-high 18 points, 11 of which came in the first half. Gavin Lutz added 11 points for the Eagles.

UNION CITY, Pa. – Behind a career-high 36 points from Aiden Hartle, North Clarion picked up a 67-46 win over Union City in a D9/10 crossover.

Hartle’s previous career-high was 33 points, set in a Dec. 3 loss of this season to Saegertown in the Sheffield Tip-Off Tournament.

“It was a long bus ride up here, so we had to make sure the guys were ready to go,” Hartle said. “We started off strong and I feel like we did that to the best of our ability.”

The second quarter was all North Clarion (2-4), however.

Leading 17-16, Hartle drilled a three that started a 16-2 run that was only broken by a Bryce Drayer layup for Union City (2-3) with five seconds left in the half.

Hartle scored 11 points in the run, part of a 21-point first half for the senior that saw North Clarion go up 33-20 at halftime.

“I kind of knew my first few shots I was feeling it,” Hartle said. “While I’m feeling it I try to get the other guys involved, work off of them and it ended up being a good night for everybody.”

Union City went on a 6-0 run to start the second half to cut the lead to single digits, but Union City followed with a 7-0 run of its own and the lead never dipped below double digits the rest of the way.

Included in Hartle’s effort was a 12-of-15 performance from the free throw line. Andy Castner scored 10 of his 15 points in the second half for the Wolves, while Drake Irwin added nine points.

FARRELL, Pa. – Farrell jumped out to a 20-6 lead after the first quarter and never looked back en route to a 68-22 win over Reynolds.

Kennedy Catholic built a 22-13 lead at halftime en route to the win, the first of the season and the first in Rick Mancino’s return to the bench.

Luke Mild scored 11 of his team-high 13 points in the second half for West Middlesex, while Richie Preston added 10 points.

SAEGERTOWN, Pa. – Logan Lentz scored 18 of his game-high 21 points in the second half as Greenville beat Saegertown, 66-58.

Noah Cano had 13 points for the Trojans and Mason Vannoy 12, as Greenville improved to 4-0 with the win.

MERCER, Pa. – Mercer jumped out to an 18-3 lead after the first quarter and never looked back in a 66-34 win over Jamestown.

Daemyin Mattocks scored 11 of his game-high 18 points in the second half for Mercer, while Jake Mattocks added 19 points and Nate Haines and Braden Balaski nine each.

Cam Keyser scored a team-high 15 points for Jamestown, including 11-of-12 from the free throw line.

TITUSVILLE, Pa. – Titusville outscored Eisenhower 28-19 in the fourth quarter on its way to a 69-65 victory.

Coming off a career-high 39 points in his last game, Manny Perez led the Rockets with 22, but it was the play of Drew Wheeling that fueled the fourth-quarter rally.

Wheeling scored 12 of his 18 points in the fourth quarter, including a pair of 3’s in the final eight minutes. Hudson Fratus was also in double figures for the Rockets with 12 points.

Eisenhower’s Wyatt Lookenhouse had a monster game in his season debut. Lookenhouse, who was returning from an injury he suffered in football, poured in 31 points, including 13 in the fourth quarter, which also included an 8-of-8 effort from the free throw line.

Kyler Black and Kris Bunk were also in double figures with 14 and 10 points, respectively.

The game was tight throughout, tied 48-48 going into the fourth quarter before Oil City outscored Meadville 14-10 over the final eight minutes.

Sayyid Donald and Ethen Knox were also in double figures scoring for the Oilers, scoring 17 and 14 points, respectively.

Derek Douglas added 14 points for the Tigers, while Santinoi Piccirilli had 12 and Lamont Austin 10.

Shakiir Jordan and Conner Perrye had eight points each for CASH.

Landon Homa had 11 points for Cochranton and Chase Miller 10.

PORTERSVILLE, Pa. – Anthony Reed poured in 30 points to lead Wilmington to a 51-42 win over Portersville Christian.

Dylan Gordon had 21 points for Slippery Rock, while John Sabo, making his season debut after a football injury, had seven points.

HARBORCREEK, Pa. – Nick Krahe had another double-double with 18 points and 16 rebounds as the Huskies earned a 50-35 win over North East.

RUSSELL, Pa. – Seneca built a 21-9 lead after the first quarter and led throughout in a 61-46 win over Eisenhower.

Emma Bleil had 12 points to lead a balanced Seneca effort, while Meghan Konkol added 10 points and Aubrey and Mallory Hammill eight each.

Mackenzie Dunn scored a game-high 16 points to lead Eisenhower, 11 of which came in the second half, while Clara Steinberg had 13 points for the Lady Knights.

The Blue Devils went on a 14-7 second-quarter run to take a 22-14 halftime advantage.

WARREN, Pa. – Audreanna Neavins scored seven of her game-high 19 points in the fourth quarter to lift Erie to a 43-41 win over Warren.