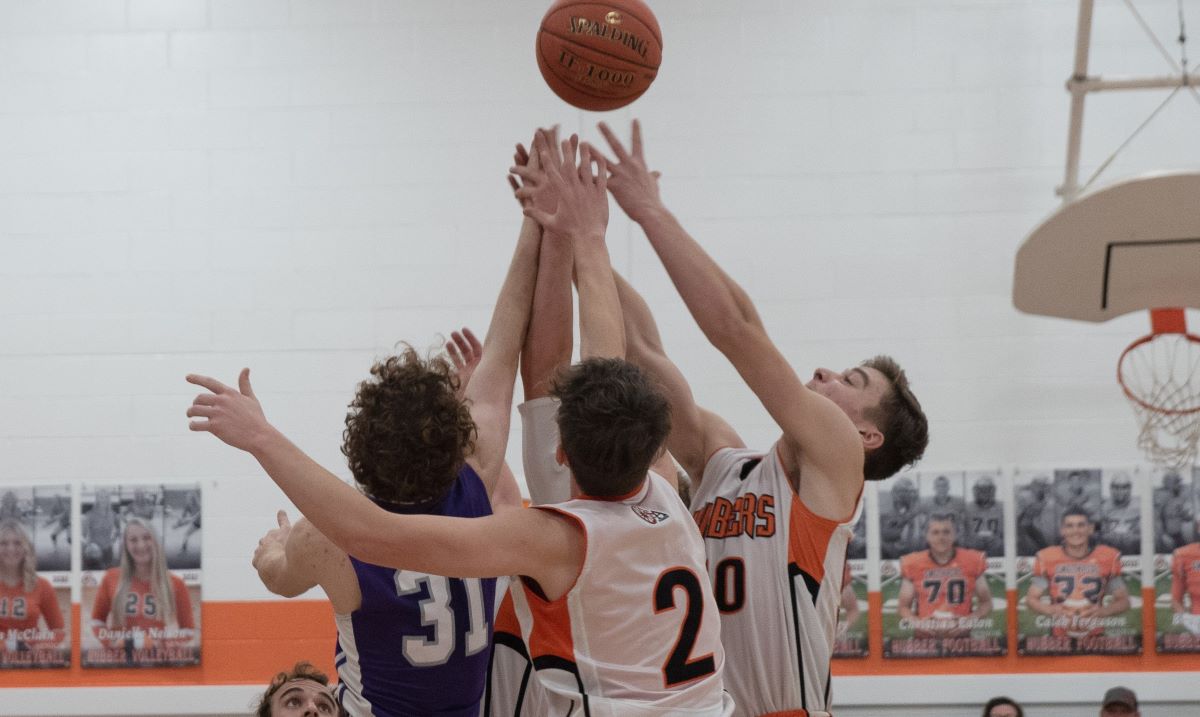 KANE, Pa. – Josh Greville hit an off-balance 3-pointer just before the horn in regulation, and Kane outscored visiting Brockway 13-6 in overtime to get a 54-47 win in AML action.

Sam Lundeen hit a big 3-pointer in the extra session for the Wolves while scoring five of his eight points in overtime, and Kane hit 8 of 10 free throws in overtime.

Freshman Jase Ferguson along with Riley Klingensmith each chipped in 11 points and eight rebounds for the Lions, while Alex Painter added 10 points.

Beighley led the Gremlins with 13 points with Sherwin and Cramer each adding 10.

Cole Henry led Keystone, which scored just 12 points over the final three quarters including just five in the second half, with 12 points, seven in the first quarter. Zander McHenry added seven points for the Panthers.

Watch Schmader’s shot via the North Clarion YouTube feed of the game.

The game was tied at 39 when Schmader hit the three.

Christian Simko got Clarion back within one, 42-41, with a layup with just under two minutes left.

But North Clarion won a scrum on the floor that led to a Zeelan Hargenrader basket to make it 44-41 with 1:43 to go.

Dawson Smail then had a chance to put Clarion in the lead when he was fouled with 24.9 seconds to play, but Smail missed both free throws and Schmader went coast-to-coast off the rebound to put the Wolves up three.

Devon Lauer’s 3-pointer with just under five seconds was off the mark, and North Clarion was able to run out the clock.

Simko had a team-high 14 points for Clarion with Lauer adding 10.

Details of this game were made possible by the North Clarion YouTube video feed of the game. Rewatch the entire game below

Landon Chalmers added a double-double with 15 points and 12 rebounds while also coming away with seven steals for the Falcons, and Jay Clover had eight points.

Jake Leiderbach had a game-high 21 points for Venango Catholic.

AUSTIN, Pa. – Adam Lucas and Dawson Hooftallen combined for 23 points in a 42-21 NTL home win for Austin over Northern Potter.

The Hubbers, who trailed 44-32 entering the fourth quarter, had a clean look from Alex Ognen at the horn from 3-point range that would have won the game that didn’t fall.

Coudersport, which started fast and led 24-11 at the end of eight minutes and 35-23 at halftime, got a game-high 19 points from Christian Furman, who scored 15 first-quarter points and also added seven steals.

Brady Streich chipped in 12 points for the Falcons, while Garrett Kellert had six points and nine rebounds and Logan Ruter seven points and seven rebounds.

SHINGLEHOUSE, Pa. – Nik Bonney led a balanced offensive effort for Oswayo Valley with 12 points, as the Green Wave picked up a 47-40 NTL win over visiting Galeton.

RIDGWAY, Pa. – Trailing by three points at the half, Brookville pulled away from Ridgway in the second half, outsourcing the hosts 34-17 the final two quarters to notch a 57-43 win.

Danny Lauer led the Raiders with 17 points, six of them coming in the fourth quarter. Hunter Geer, Clayton Cook, and Griffin Ruhlman each scored eight points.

JOHNSONBURG, Pa. – Shutting out visiting Bradford in the third quarter, Johnsonburg overcame a five-point halftime deficit to beat the Owls, 28-25.

Aaron Myers led the Rams, who trailed 17-12 at halftime but led 19-17 after the third quarter, with six points with Jefferson Freeburg and Luke Zimmerman each scoring five.

Sheffield’s Lucas McNeal had a shot to tie the game at the buzzer, but it bounced off the back of the rim.

Sheffield twice cut the lead to one in the final minute, but Eisenhower’s Takhari Warren and Kael Hunt went 4-of-4 from the free-throw line to help the Knights preserve the lead and get the win.

Tony Richards had a big game for Sheffield, scoring a game-high 22 points, while Connor Finch had 15 and McNeal 11.

Curt Darling finished with 15 points for Eisenhower and Kyler Black 11.

Dec. 15, 2021 D10 Boys/Girls Hoops: Eisenhower Boys Hold off Sheffield; Cochranton Powers Past Titusville
Dec. 15, 2021 D9 Girls’ Hoops: Wood, Buttery Lead Brockway Past DCC; Punxsy Gets Win
This website or its third-party tools process personal data.In case of sale of your personal information, you may opt out by using the link Do not sell my personal information.
×
Manage consent