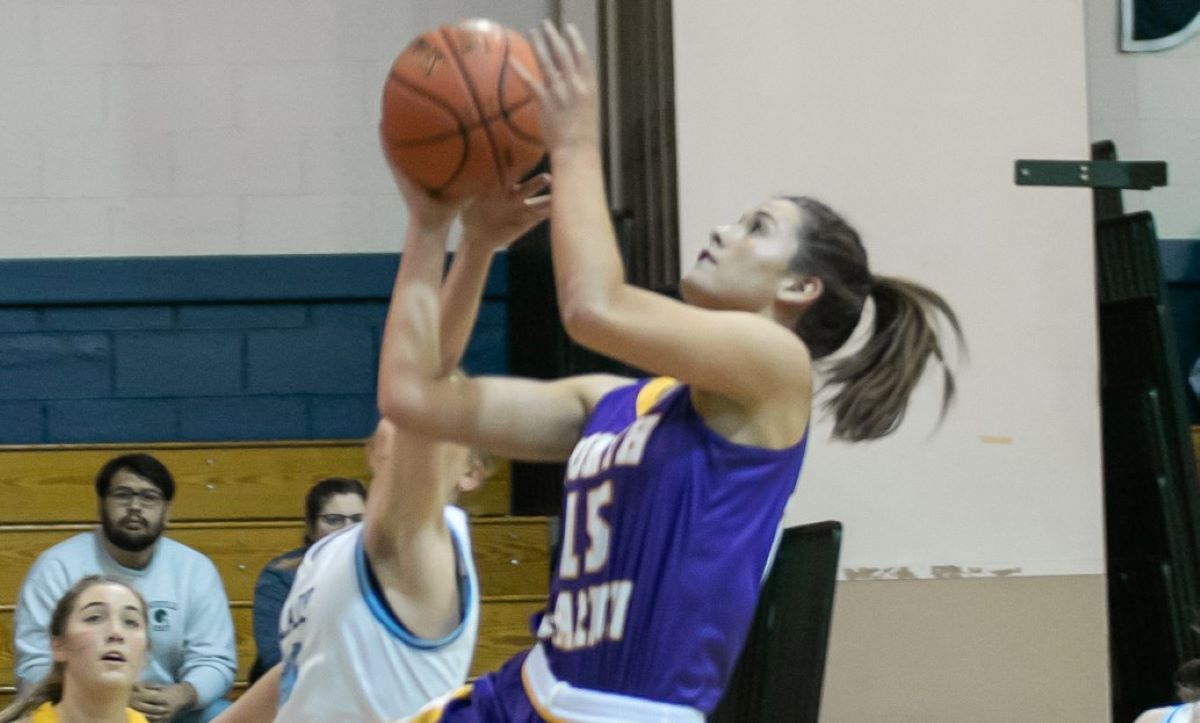 CLARION, Pa. – North Clarion used a first-half-ending 14-3 run to fuel a 45-36 win at Clarion in the KSAC Small School opener for both teams.

The She-Wolves led by just two, 10-8, midway through the second quarter when Maria Bauer took over scoring 10 straight points – mostly off turnovers to help build the lead to 24-11 at the break.

North Clarion advanced the lead to as many as 15 in the fourth quarter before the Lady Cats made a late run to get back within single digits.

Gwen Siegel led a balanced effort for North Clarion with 12 points and was named the Allegheny Grille of Foxburg Player of the Game.

She talked about the game.

Bauer added 10 points for the She-Wolves, all in the second quarter, and Emma McFarland had eight.

SENECA, Pa. – Led by 15 points from Mylee Harmon, Redbank Valley put four players in double digits in a 66-18 win at Cranberry in the KSAC Large School opener for both schools.

Claire Clouse added 14 points for the Lady Bulldogs who also got 13 points from Caylen Rearick and 12 from Madison Forringer.

KNOX, Pa. – A 19-point effort from Emma Johns helped visiting Karns City to a 58-23 win at Keystone in the KSAC Large School lid-lifter for both squads.

STRATTANVILLE, Pa. – Frances Milliron and Alex Leadbetter each scored 14 points to lead Clarion-Limestone to a 45-39 win over visiting Moniteau in the KSAC Large School opener for both teams.

The Lady Lions overcame a slow start that saw them score one first-quarter point to get the win.

Moniteau led 8-1 at the end of eight minutes and 17-14 at halftime but trailed 33-24 after three quarters of play as Milliron scored six points and Leadbetter five in the third quarter for C-L.

Catherine Kelly had a game-high 19 points to go with four steals for Moniteau with Devina Pry adding eight points. Victoria Pry had eight rebounds and three blocked shots while chipping in two points for the Lady Warriors.

PHILIPSBURG, Pa. – Using a 16-point second quarter, Clearfield built a 15-point halftime lead on its way to a 69-32 win at Philipsburg-Osceola in the Mountain League opener for both teams.

The win was the first as the Lady Bison head coach for Missy Helsel, and it came against her former team. She coached the Mountaineers for three seasons from 2009 through 2011 winning 34 games.

Cook led the Lady Raiders with 20 points with Haight and Wonderling each scoring 17.

PORT ALLEGANY, Pa. – Katie Sheeler scored a game-high 20 points to help Otto-Eldred to a 50-19 win at Port Allegany in the NTL opener for both teams.

Anna Merry added 11 points for the Lady Terrors, who saw all 10 players in the book score.

COUDERSPORT, Pa. – On a day the school and the community mourned the death of former head coach Bob Tingley, Coudersport gave first-year head coach Joe Bunnell his first win, 38-20, over visiting Smethport in the NTL opener for both squads.

SHINGLEHOUSE, Pa. – Makena Manning led a balance Oswayo Valley squad with nine points and six steals in a 32-11 win over visiting Galeton in the NTL opener for both teams.

Makenzie Mesler added eight points and five rebounds for the Green Wave who also got six tallies from Jenna Freer.

DUBOIS, Pa. – Trailing by 10 at halftime and seven going to the fourth quarter, DuBois rallied to beat visiting Ridgway, 38-35.

The Lady Beavers were down 26-16 at the break and 30-23 going to the fourth quarter but outscored the Lady Elkers, 15-5, in the final eight minutes behind six points each from Abby Geist-Salone and Abbie McCoy.

The six tallies were the only points on the night from McCoy, while Geist-Salone led DuBois with 13 points. Madison Rusinica also scored seven points in the win.

Halle Kuzminski chipped in with seven points and Sam Ruhlman six for the Lady Dragons, who led by 25 at halftime.

Dec. 14, 2021 D9 Boys: Otto-Eldred uses Strong Second Half to Beat Port Allegany; ECC, Clearfield Get Wins
Dec. 15, 2021 District 9 and District 10 Basketball Schedules Powered by Hunter’s Station Golf Club
We use cookies on our website to give you the most relevant experience by remembering your preferences and repeat visits. By clicking “Accept All”, you consent to the use of ALL the cookies. However, you may visit "Cookie Settings" to provide a controlled consent.
Cookie SettingsAccept All
Manage consent