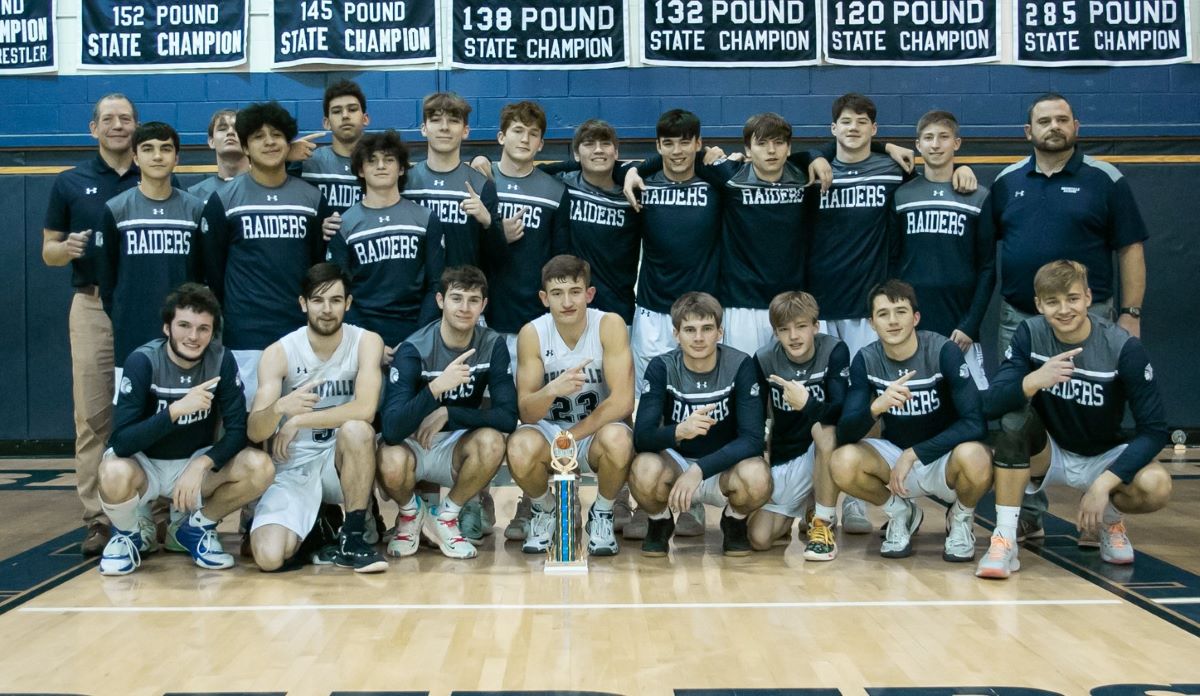 BROOKVILLE, Pa. – Ending Warren’s two-year run as Brookville Tip-off Tournament champions, Brookville used a late 9-0 run to get past the visiting Dragons in a 64-58 victory.

Clayton Cook put the Raiders up for good at 57-55 with 2:30 left and Noah Peterson made one of two free throws in the closing seconds to cap the run before a Kody Vega 3-pointer in the final seconds set the final score.

The Raiders led by as many as 11 points in the second quarter at 22-11 before Warren got it to within 29-28 by halftime. Brookville pushed it back to an eight-point lead in the fourth, but Warren trailed by four at 50-46 going into the fourth quarter.

Leading only 2-0 all night, that was the only lead the Dragons had even after tying it up at 55-55 on Ordiway’s 3-pointer with 3:07 remaining.

BROOKVILLE, Pa. – Earning a split at the Brookville Tip-Off Tournament, Union claimed third place with a 51-32 win over Brockway in the consolation game.

All-tournament selection Caden Rainey led the Knights with 22 points and was the lone player in double-figure scoring. Skyler Roxbury scored nine points. The Knights led 20-15 at halftime and pulled away in the second half with a 31-17 advantage.

KNOX, Pa. – Holding host Keystone to its fewest points in recent memory, DuBois easily took home the championship of the Keystone Tip-off Tournament with a 44-12 victory.

DuBois led 16-3 at the end of the first quarter and 30-7 at halftime before allowing just two second-half baskets.

Joey Foradora and Chooch Husted each scored 13 points to lead the Beavers.

FOXBURG, Pa. – Karns City held off a fourth-quarter charge from North East to pick up a 48-47 win in the Hoops for Heroes Kickoff at A-C Valley.

The Gremlins led by 11, 36-25, going to the final eight minutes before the Grape Pickers went on a run – a 3-pointer at the horn did make the score a little close than it was.

Ryan Mayes had a game-high 20 points for North East, including 12 in the fourth quarter, while Noah Croizer added 10 and Owen Kemp eight.

FOXBURG, Pa. – Landon Chalmers had a monster night with 24 points and 19 rebounds to give A-C Valley its first win of the season, 68-44, over Portersville Christian at the Hoopes for Heroes Kickoff at A-C Valley.

Jay Clover also had a double-double for the Falcons with 11 points and 10 rebounds, while Alex Preston added 13 points, and Brody Dittman eight. Ryan Cooper dished out nine assists and recorded six points.

DUBOIS, Pa. – Alec Srock hit a 3-pointer just before the horn to force overtime, and freshman Brayden Fox scored seven of DuBois Central Catholic’s 12 overtime points in a 56-50 win over Johnsonburg at the DCC Tip-off Tournament.

The Cardinals trailed 35-29 going to the fourth quarter before forging a 44-all tie at the end of regulation.

Srock scored eight of DCC’s 15 points in the fourth quarter, including the game-tying shot from the top of the arc.

Srock led DCC with a game-high 23 points followed by13 points from Fox and 11 from Luke Swisher.

DUBOIS, Pa. – Punxsutawney took advantage of DuBois Central Catholic having to play two games in one day because of Venango Catholic pulling out of the DCC Tip-off Tournament and the Cardinals going to overtime to beat Johnsonburg earlier in the day top the host, 46-29.

DUKE CENTER, Pa. – In a football-like 28-27 score, Otto-Eldred held on to win the Randy Stebbins Memorial Tournament at Otto-Eldred over Bradford.

Bradford, which had trailed from the start, took a 27-26 lead on a pair of Cam Austin free throws late before Gavin Jimerson hit a baseline shot with less than a minute left to give the Terrors the victory.

Otto-Eldred led 22-11 at halftime before Bradford clawed back within three, 24-21, going to the fourth quarter.

Austin Cousins led the Terrors with nine points with Jimmerson and Landon Francis each scoring eight.

Jerid Wilmoth scored a game-high 11 points for Bradford with Austin chipping in eight.

Tournament MVP Jaden Wilkins had 13 points for Saegertown, which built a 31-15 lead en route to the win.

SHEFFIELD, Pa. – Aiden Hartle scored a game-high 20 points to help North Clarion to a 53-28 win over Port Allegany in the consolation game of the Sheffield Tip-off Tournament.

WESTFIELD, Pa. – Morgan Torrey had 11 points, as Genessee Valley won a defensive struggle over Northern Potter, 28-25, in the consolation game of the Cowanesque Valley Tip-off Tournament.

NEW BETHLEHEM, Pa. – Visiting Bishop McCort took a 13-point first-half lead and went on to capture Redbank Valley’s Tip-Off Tournament with a 55-39 win over the host Bulldogs in the championship game of the Redbank Valley Tip-off Tournament.

For the Bulldogs, Bryson Bain was the lone player in double figures with 13 points. Chris Marshall and Mason Clouse each scored seven points.

Anthony Pereira led a balanced Grove City attack with 15 points, while Dylan Stull had 14 (including four triples) and Dylan Stull 10.

The Eagles scored 50 points in the first half.

Allen Johnston scored a game-high 20 points for Forest, 14 of which came in the first half, while Mitchell Bawden added 15.

Dec. 11, 2021 District 9 Girls’ Basketball Recaps: DuBois, N. Clarion, Ridgway, DCC Capture Tournament Titles
Watch Live: North Clarion at Clarion Girls’ Basketball
We use cookies on our website to give you the most relevant experience by remembering your preferences and repeat visits. By clicking “Accept All”, you consent to the use of ALL the cookies. However, you may visit "Cookie Settings" to provide a controlled consent.
Cookie SettingsAccept All
Manage consent