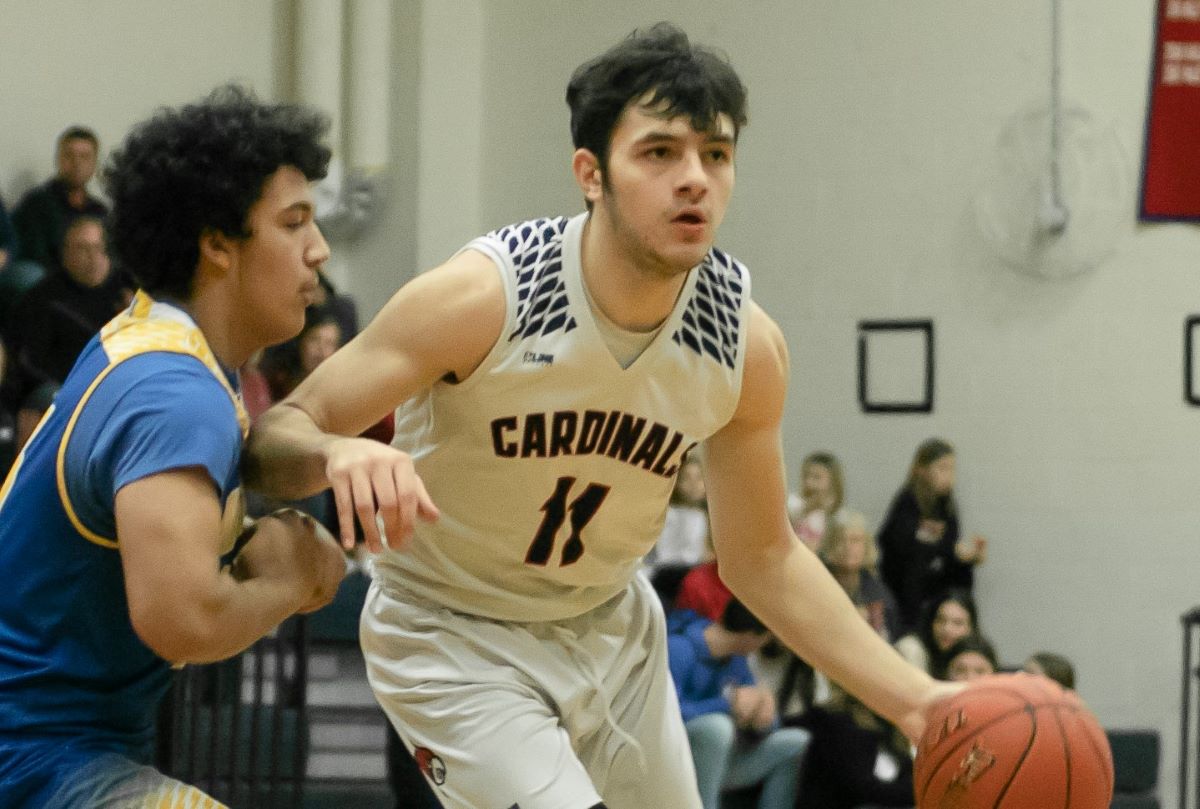 Alec Srock scored 17 points to help DCC into the District 9 Class 1A semifinals with a win over Johnsonburg Friday. Photo by Jared Bakaysa of JB Graphics. See more of Bakaysa's work here

DUBOIS, Pa. – Alec Srock scored a game-high 17 points as third-seeded DCC held off a late rally from sixth-seeded Johnsonburg on its way to a 53-47 victory in the District 9 Class 1A quarterfinals.

DCC (17-7) swept the regular-season series with wins of 56-50 and 52-50 both in overtime and it was looking like history could repeat itself for the third time.

“They’re a tough team,” DCC head coach Dom Varacallo said. “We knew it was going to be a battle. Our guys focused all week and we committed to the defensive end and showed a different look that worked for us.”

“We made some uncharacteristic plays,” Varcallo said. “A big thing was we allowed a lot of offensive rebounds that led to threes. We focused on rebounding and after (the timeout) it enabled us to get out on the break and execute on offense and extend the lead again.”

Following a timeout, Andrew Green knocked down a 3-pointer and helped ensure that four-point deficit was the closest the Rams would get the rest of the game.

“(Coach Varcallo) told us to start calming down,” Srock said of the conversation during the timeout. “We need to play the basketball we know how to play and to just be us.”

The fourth quarter also saw a balanced team effort in terms of scoring for the Cardinals.

“Guys stepped up,” Varcallo said. “You want it to be a team. It’s great to see guys step up, great team win, and a great playoff win.”

DCC raced out to a 9-5 lead at the end of the first quarter which was fueled by a Brendan Paisley 3-pointer less than a minute into the game.

“That was the play of the game,” Srock said of the Paisley 3-pointer. “It’s hard to come off and get the first points and that really set the tone for the rest of the game.”

Ben Gritzer helped the Cardinals extend the lead to 25-15 heading into halftime with a putback layup as time expired.

The third quarter was more back and forth and the Rams got within eight (31-23) but a late Srock 3-pointer gave the Cardinals the 34-23 lead going into the final quarter.

Despite the loss, Isaiah Jackson had a team-high 16 points with eight coming in the fourth. Lobaugh also scored all his points in the fourth by hitting three 3-pointers and a pair of free throws to finish with 11.

DCC advances to the Class 1A semifinals and will take on second-seeded Otto-Eldred, fresh off a 77-64 win over seventh-seeded Union on Wednesday, March 2, at a time and location to be determined. The Cardinals qualified for the PIAA playoffs with the win.

Johnsonburg’s season isn’t over. The Rams are still alive for the fifth and final PIAA playoff berth awarded to District 9 in Class 1A and will face Union in the opening round of the two-round fifth-place consolation tournament next week at a date and time to be announced. That game appears that it will be at Johnsonburg.

The second-seeded Terrors (21-2) essentially landed the knockout blow when they went on a 13-0 run to end the third quarter and held on for a 77-64 win over the seventh-seeded Golden Knights (12-9) in their Class 1A quarterfinal.

Trailing 43-42 with 2:01 to go in the third quarter, Austin Cousins hit a 3-pointer that sparked the Terrors’ big run. Landon Francis had three steals during the run and scored five of the 13 points.

“We switched up some defensive people and went to a 1-3-1 and (it) helped us a lot in getting some steals and fast, easy points,” Francis said.

“They put a little pressure on, and we knew it was coming,” Union coach Eric Mortimer said. “We practiced for it coming in, but it’s not like having the same speed. They have good speed.”

Otto-Eldred used an 8-0 run over the second and third quarters to grab a 36-29 advantage, the largest lead of the game to that point for either team. Union responded with a 9-0 run of its own to go up 38-36.

And Union answers with a 9-0 run to take the 38-36 lead pic.twitter.com/OeFKBoz5zQ

The teams traded buckets again until Payton Johnston hit a 3-pointer to give the Knights that 43-42 lead.

“We knew it was going to be a challenge,” Otto-Eldred coach Steve Bell said. “We hadn’t really seen that size in any of our games this year except early on. Their height gave us some problems for sure.”

The Terrors iced the game from the free-throw line, as they shot 84 percent (16/19) from the line in the fourth quarter.

“Our pace caught up with them a little bit,” Bell said. “We kept our foot on the gas and put some real pressure on the ball.”

Dawson Camper’s putback at the end of the first quarter gave the Knights a 14-13 advantage heading to the second.

After being shut out in the first quarter, Francis connected on three 3-pointers in the second on his way to a game-high 24 points. He also had six rebounds, six assists, and five steals.

The third of Francis’ second-quarter threes came with a minute to go and gave the Terrors a 28-25 lead.

Johnston answered by completing a 4-point play to give the Knights a one-point edge. It was Cousins, however, who got the final blow in with a 3-pointer just before the buzzer.

Just. Wow, what a half pic.twitter.com/WzgZR6VSl9

Johnston finished with a team-high 22 points. Camper had 15 and Zander Laughlin added 13.

Cousins had 18 points and Gavin Jimerson had 15. Jimerson pulled down five rebounds.

Otto-Eldred will meet DuBois Central Catholic in the semifinals on March 2 at a time and location to be announced. The Terrors have qualified for the PIAA playoffs with the win.

Union’s season isn’t over. The Golden Knights are still alive for the fifth and final PIAA playoff berth awarded to District 9 in Class 1A and will face Johnsonburg in the opening round of the two-round fifth-place consolation tournament next week at a date and time to be announced. That game appears that it will be at Johnsonburg.

The Wolves (16-9) trailed 27-26 at halftime after outscoring the Red Raiders (16-6) 16-13 in the second quarter thanks to nine points from Zeelan Hargenrader.

Hargenrader stayed hot in the third quarter hitting a pair of 3-pointers and scoring eight of North Clarion’s 19 points to give the Wolves a 45-36 lead by the end of the quarter.

North Clarion got the lead to as many as 13, 52-39, with 5:22 left in the game before Cameron County tried to mount a comeback behind Camdyn Allison and Hayden Brown.

Allison hit a pair of 3-pointers and scored eight points in the fourth quarter and Brown added eight points of his own in the quarter to help the Red Raiders climb back to within six, 55-49, with 1:30 to play.

Hargenrader had a career night for North Clarion with a career-high 20 points to go with seven rebounds and two steals. The junior came in averaging 5.9 points per game and had scored a total of 18 points in his last five games before exploding on Friday scoring all of his points from the second quarter on.

Brown had a game-high 25 points for Cameron County with Allison adding 19.

North Clarion will face top-seeded Elk County Catholic in the semifinals on Wednesday, March 2, at a site and time to be announced. The Wolves qualified for the PIAA playoffs with the win.

Cameron County’s season isn’t over. The Red Raiders are still alive for the fifth and final PIAA playoff berth awarded to District 9 in Class 1A and will face Clarion in the opening round of the two-round fifth-place consolation tournament next week at a date and time to be announced. That game appears that it will be at Cameron County.

ST. MARYS, Pa. – There will be a new champion in District 9 Class 1A boys’ basketball.

Top-seeded Elk County Catholic outscored eighth-seeded Clarion 9-2 in the second quarter to knock off the defending champion Bobcats, 51-36, in the D9 1A quarterfinals at ECC.

It was a bit of revenge for the Crusaders, who lost in the semifinals on their home court to Clarion a year ago.

This time, ECC (20-5) grabbed a 15-10 lead at the end of the first quarter thanks in part to a pair of Jordan Wasko 3-pointers and then put the clamps down defensively on the Bobcats limiting them to a Christian Simko basket in the second quarter while pushing the lead to 12, 24-12, by halftime.

Charlie Breindel was the key offensive player in the second quarter for ECC with seven of his game-high 22 points. That was his second-highest scoring output of the season.

The Crusaders did a great job on Simko, Clarion’s leading scorer at 18.2 points per game, holding him to a season-low seven points.

ECC will face fifth-seeded North Clarion in the semifinals on Wednesday, March 2, at a site and time to be announced. The Crusaders qualified for the PIAA playoffs with the win.

Clarion’s season isn’t over. The Bobcats are still alive for the fifth and final PIAA playoff berth awarded to District 9 in Class 1A and will face Cameron County in the opening round of the two-round fifth-place consolation tournament next week at a date and time to be announced. That game appears that it will be at Cameron County.

Redbank Valley Moves into 2022 D9 3A Title Game; Otto-Eldred Tops Union to Advance to D9 1A Semifinals
Feb. 26, 2022 District 10 Basketball Schedule Powered by Hunter’s Station Golf Club
This website or its third-party tools process personal data.In case of sale of your personal information, you may opt out by using the link Do not sell my personal information.
×
Manage consent