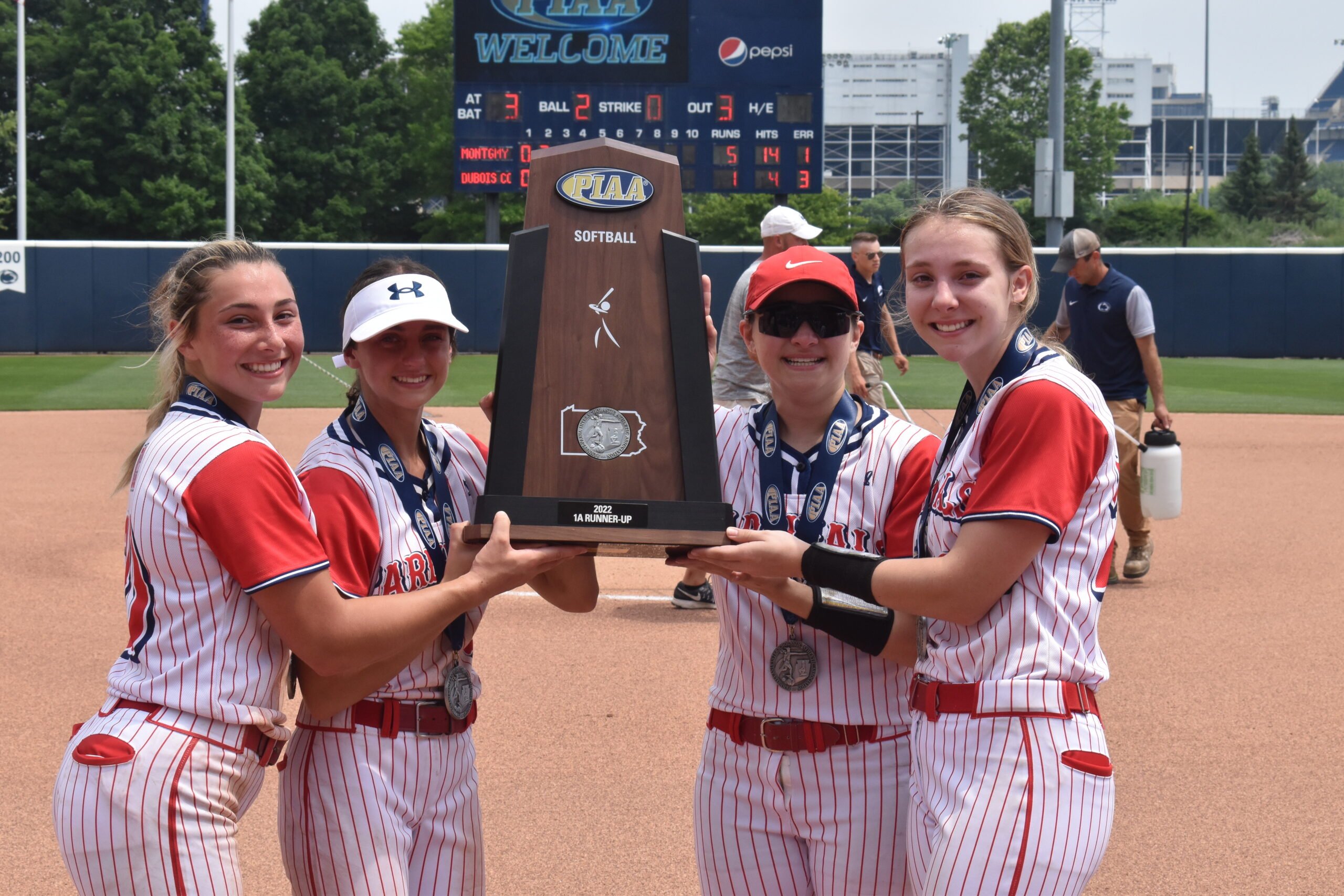 DCC seniors with the second-place trophy. Photo by Andy Close

UNIVERSITY PARK, Pa. – In getting to the PIAA Class 1A softball championship game, DuBois Central Catholic relied on timely hitting and strong defense.

Unfortunately for the Lady Cardinals, the trend didn’t continue in a 5-1 loss to Montgomery Thursday morning at Beard Field at Nittany Lion Softball Complex on the campus of Penn State University.

“Giving up 14 hits and two or three errors, we were fortunate we only lost 5-1,” DCC manager George Heigel said. “We had a chance until the sixth inning when they broke it open.”

Four of the five Red Raider runs were unearned thanks to crucial errors by DCC in the second, when Montgomery scored twice, and the fifth, when the Red Raiders scored three more runs after the Lady Cardinals had cut the deficit to 2-1.

“We didn’t defend as well as we could,” Heigel said. “Although we made some good defensive plays, but we didn’t make some of the routine plays. It was kind of confusing.”

In the second inning, Jenna Waring led off with an infield single up the middle, and Kaylei Snyder put down a bunt that first baseman Morgan Tyler threw into right field.

After a great relay throw by Madi Hoyt on a base hit by Brynn McRae threw Waring out at the plate, Cortney Smith followed with an RBI single. Two more singles, one from Shelby McRae and another from Faith Persing, pushed another run across giving Montgomery an early 2-0 lead.

With just one out and having given up four straight hard-hit balls, the day came to an end for Melia Mitskavich.

Mitskavich, who had been so strong through the playoffs for DCC, finished allowing two runs, one earned, on six hits in 1 ⅓ innings of work.

“It appears to me that they adjusted from the video I saw,” Heigel said. “(In the video) they were crowding the plate a lot against the pitcher from Glendale (in the semifinals). I think they made an adjustment and got their girls back off, and none of them were crowing the plate like I saw them do against Glendale. Those balls that are normally hit on the fist against her were getting squared up. I had to do something there. There were like five straight hits there.”

Morgan Tyler relieved Mitskavich and kept DCC in the game by getting out of the second-inning jam and then getting out of a bases-loaded jam, in the fourth and a first-and-third, one-out jam in the fifth.

“Moe, to her credit, came in and threw strikes and most, often times, worked ahead in the count,” Heigel said. “Hats off to her. She was willing and able to take that role on as closer. Today, it was a little earlier than natural. It was more of long relief. That’s not common for a young girl to take that backseat and recognize what is best for the team.”

That allowed DCC to get back in the game with a run in the bottom of the fifth when Savannah Morelli led off the inning with her second double of the game and scored on a one-out double by Jessy Frank. Morelli had three of the Lady Cardinals four hits in the game.

Savannah Morelli dives back into first after singling in the seventh. It was one of three hits for Morelli. Photo by Andy Close

“Savannah Morelli could easily be a Division II softball player if she had played all four years,” Heigel said. “She is just hitting her peak right now.”

The Lady Cardinals had a great chance to take the lead when Lauren Davidson’s popup to shortstop was dropped by shortstop Kaitlyn Raemsch putting runners on second and third with one out.

But Faith Persing induced Rose Whipple and Morgan Tyler to both pop out to end the threat.

“We just didn’t get that clutch hit that we have been having,” Heigel said. “You have games like that. You hope it never happens in a state championship.”

The Red Raiders then scored three critical insurance runs in the sixth inning thanks to an error by third baseman Kali Franklin, whose throw to second with no out and Smith at first went into right field putting runners on first and third. Persing then had an infield single off the glover of Tyler to make it 3-1.

Tyler looked like she was going to get out of the inning with no further damage despite the bases being loaded with no outs when she got Raemsch to bounce into a 1-2-3 double play. But Taylor McRae made it 5-1 with a two-run single to center.

That was more than enough for Persing, who, while not racking up strikeout numbers like she had during the regular season, kept DCC off balance most of the game limiting the Lady Cardinals to four hits while striking out six.

“It’s hard to see it down at third base (what she was doing),” Heigel, who coaches third, said. “I don’t know what it is if it’s her spin. I don’t know. I know the riser has been her pitch throughout her career. But I didn’t see us striking out and missing her riser a whole lot. We were fouling a bunch of them off. I don’t have an answer for it. It might have been the spin. She is a good pitcher. We faced a bunch of good pitchers in the tournament.”