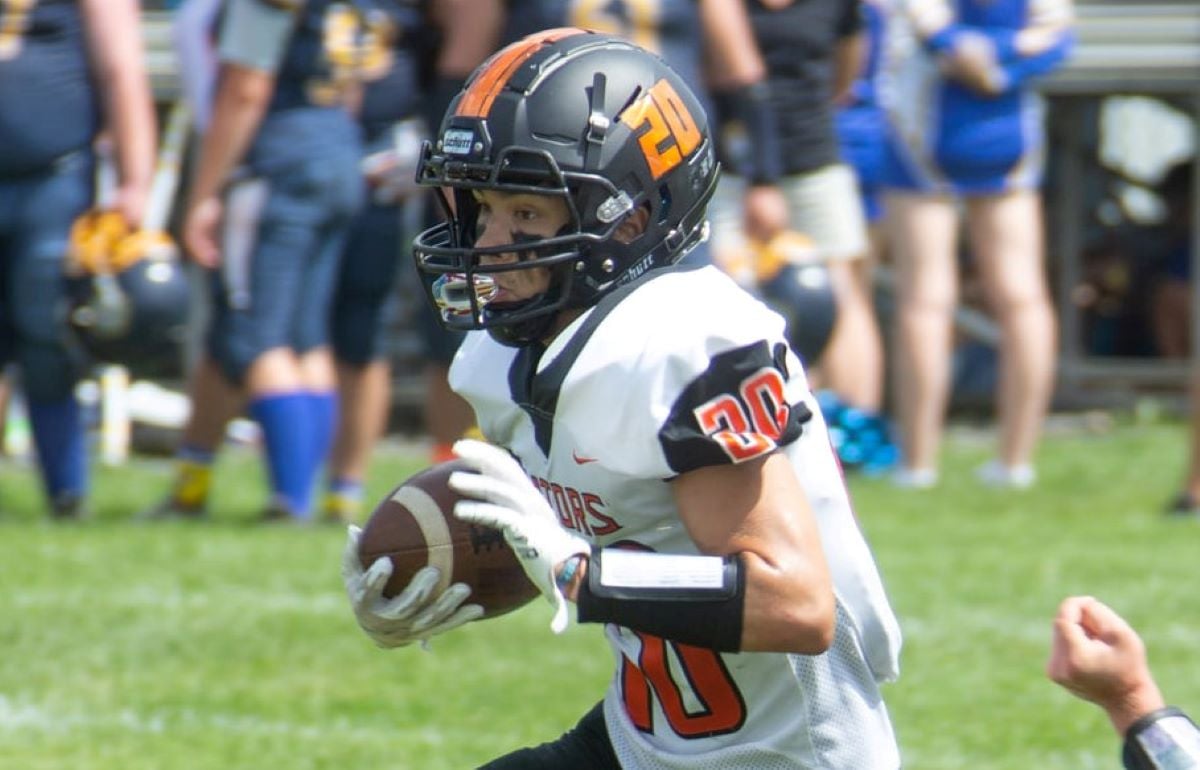 And then there were two.

After Elk County Catholic fell from the ranks of the unbeaten in last week’s shutout loss to Coudersport, only Redbank Valley and Central Clarion remain as the District 9 football teams with perfect records at 6-0.

Those teams actually play each other in a non-region showdown in Week 10, but prior to that, both teams have three important games remaining on the schedule.

It’s a 13-game week in District 9 with all games scheduled for Friday night. There are plenty of regional matchups that’ll not only help sort out the standings but also lay more groundwork in figuring out the seeding for especially the Class 1A playoffs.

Last week’s Central Clarion overtime win over Karns City pretty much sorted out the top seed for the Class 2A playoffs as the Wildcats likely get that nod with the Gremlins probably landing at No. 2. The question is how many other Class 2A teams enter the playoffs.

The Wildcats are back at home at Clarion University’s Memorial Stadium against 2-4 Moniteau while Karns City (3-3) hosts Class 3A Punxsutawney (3-3) in an interesting Region 1 matchup. The question on whether any other Class 2A school will make up what could be up to a four-team playoff is the question.

To sum up, there won’t be four Class 2A teams with winning record that will fill the bracket. It’ll be a matter of whether any team goes with a losing record.

The Bulldogs, meanwhile, look to solidify their spot in Class 1A, although next week’s showdown at Port Allegany will determine a lot at the top of the Class 1A seedings. The Gators (5-1) travel to Rimersburg to face Union/A-C Valley (3-3) which is coming off a 38-8 loss to the Bulldogs.

Class 1A has more than one key “seeding” showdown — games that’ll factor into playoff seeding consideration — as Brockway (3-3) hosts Keystone (4-2) and Otto-Eldred (4-2) visits Coudersport (4-2). The Crusaders (5-1) try to bounce back from their loss to Coudersport with a trip to Bucktail (2-3).

Two other larger school matchups have intriguing storylines as DuBois (4-2) visiting St. Marys (4-2) in a Region 1 game with both teams coming off losses. In District 6’s Mountain League, the Clearfield Bison (5-1) host Tyrone (5-1) in a battle of one-loss teams.

The Wildcats look to keep their perfect season intact against the Warriors, who are coming off a 29-19 win over Bradford. The Wildcats routed the Owls, 48-7, two weeks ago.

The Warriors’ Hunter Stalker has rushed for over 550 yards. He ran for 156 yards in last week’s win over Bradford.

The Gremlins host the Chucks in an interesting Region 1 matchup considering the Chucks shut out DuBois 23-0 last week and it was the Beavers who beat Karns City 28-7 in Week 1.

The Chucks held DuBois to 90 yards of offense as they spun their second shutout win of the season. Zeke Bennett ran for over 100 yards for the fifth time and hiked his season total to 840 yards on 157 carries with 10 TDs.

It’s another interesting Region 1 matchup between teams coming off frustrating losses, the Beavers in a 23-0 loss to Punxsutawney and the Dutch in a 22-19 loss at Brookville.

The Beavers managed just 90 yards in their shutout loss to the Chucks while the Dutch committed five turnovers in their loss to the Raiders.

The Raiders host the Owls on Homecoming as they’ll try to keep the momentum going after last week’s come-from-behind win over St. Marys.

Jackson Zimmerman, last week’s Player of the Week, ran for a career-high 235 yards on 37 carries against the Dutch with two touchdowns. He’s up to 604 yards and three TDs in five games.

The Owls have lost 24 straight games, their 29-19 loss last week to a Moniteau team that the Raiders beat 7-0 three weeks ago.

The Bulldogs and Wolves haven’t met since the 2010 playoffs when the Bulldogs won, 15-0.

While the Bulldogs were beating Union/A-C Valley, 38-8, the Wolves dropped a 26-6 loss to one-loss Port Allegany last week. They trailed the Gators 12-6 at halftime.

Kane’s Ricky Zampogna is its leading playmaker, rushing for 629 yards on 107 carries with 12 TDs. Junior quarterback Kyle Zook has completed 58 of 112 passes for 628 yards with four TDs and seven interceptions.

The Gators, who host Redbank Valley next week, head to Rimersburg to face the Falcon Knights who were roughed up 38-8 last week by the Bulldogs. The Gators led Kane 12-6 at halftime before blanking the Wolves, 14-0, in the second half.

Union/ACV averages 231 yards per game offensively, coming off a season-low 160 yards against Redbank Valley. The Falcon Knights lost Dawson Camper, Skyler Roxbury and Logan Skibinski to injuries during the loss to the Bulldogs, so their status is uncertain for Friday’s game. For the season, Camper (62-363, 5 TDs) and Mikey Card (52-215, 2 TDs) lead the Falcon Knights’ game. Brody Dittman (37-for-88, 439 yards, 3 TDs, 6 Ints.).

Both teams have one win, but it was the Elkers who ended their 0-5 start last week with a 26-20 win at Keystone.

Aiden Zimmerman ran for 140 yards and a touchdown while quarterback Cameron Larkin completed 9 of 19 passes with a touchdown pass and run. Larkin has passed for 658 yards and five TDs so far. Zimmerman went into the game with 110 yards rushing for the season.

The Hubbers have lost four straight games, scoring three TDs in that span with a 41-6 loss last week at Brockway. Their statistics are not available on maxpreps.com.

The Rovers try to make it two wins in a row while the Panthers look to rebound from a loss to Ridgway last week. It’s one of the “seeding” matchups this week among the Class 1A playoff contenders.

The Panthers played without leading rusher Kyle Nellis (99-623, 10 TDs) last week and his status for Friday is uncertain. Tyler Albright has rushed for 488 yards and 3 TDs while leading the team with 14 catches for 357 yards and 5 TDs.

The way things look in Class 1A, the winner of this game may guarantee themselves a legitimate “top eight” seed argument for the playoffs at the very least.

The Falcons came up with a big win over Elk County Catholic, 6-0, last week and it was their third straight shutout win, their first such streak since 2006. Xander Brown’s 9-yard TD run was the lone score of the game. The Falcons were also playing without Gavin Ayers, who will miss the rest of the season with an injury. They threw just one pass, incomplete, with Brown running for 80 yards on 17 carries.

The Wolverines’ losing streak ran to 16 with a 50-24 loss to Otto-Eldred two weeks ago. The Wolverines’ two losses to Bucktail were 42-12 and 42-22. Last week, the Red Raiders notched their first win with a 38-14 win over the Bucks last week.

The Red Raiders had scored 32 points in their first five games before last week’s win. Malakai Zucal ran for 110 yards while quarterback Maddox Baughman ran for two touchdowns and threw for one. For the season, Baughman has thrown for 524 yards and two TDs while rushing for four TDs.

In last week’s loss to Otto-Eldred, the Wolverines had Colby Barr throwing for 201 yards and two TDs to Dylan Harwick and Hunter Silvis. Season statistics aren’t available on maxpreps.com.

The Crusaders were shut out 6-0 by Coudersport last week. They’ll look to rebound against a Bucks team that ECC beat 30-16 already back in Week 3. Bucktail lost 38-14 to Cameron County last week. Both of the Bucks’ wins are against winless Sheffield.

Neither team had statistics posted on maxpreps.com.

Tyrone is coming off its first loss of the season in a 31-7 setback at home to Bald Eagle Area. The Bison won their fifth straight game in last week’s 42-0 win over Huntingdon. In Week 2, the Bison beat BEA, 7-3.

Brady Collins ran for 223 yards and three touchdowns against Huntingdon. He’s up to 878 yards and 10 TDs for the season.

The Golden Tide have lost three of four games, including last week’s 32-31 setback at West Branch. Moshannon Valley lost 28-0 to Juniata Valley, a team that the Tide beat 36-15 back in Week 2.

Curwensville quarterback Dan McGarry continues to anchor the Tide’s offense, accounting for 321 of the team’s 365 offensive yards per scrimmage per game. He’s thrown for 1,238 yards and 11 TDs against nine interceptions, completing 101 of 179 passes while rushing for 690 yards on 85 carries and nine TDs. Brothers Chris (32-387, 4 TDs) and Nick (29-369, 2 TDs) Fegert are his top receiving targets.

Week 7 D10 Football: Farrell-Sharpsville Battle For Top Spot in Region 3; Meadville Puts Unbeaten Record on the Line
YDL Sports Network to Broadcast Keystone/Brockway; Saegertown/Eisenhower; GWM Extra Point Show Friday
This website or its third-party tools process personal data.In case of sale of your personal information, you may opt out by using the link Do not sell my personal information.
×
Manage consent