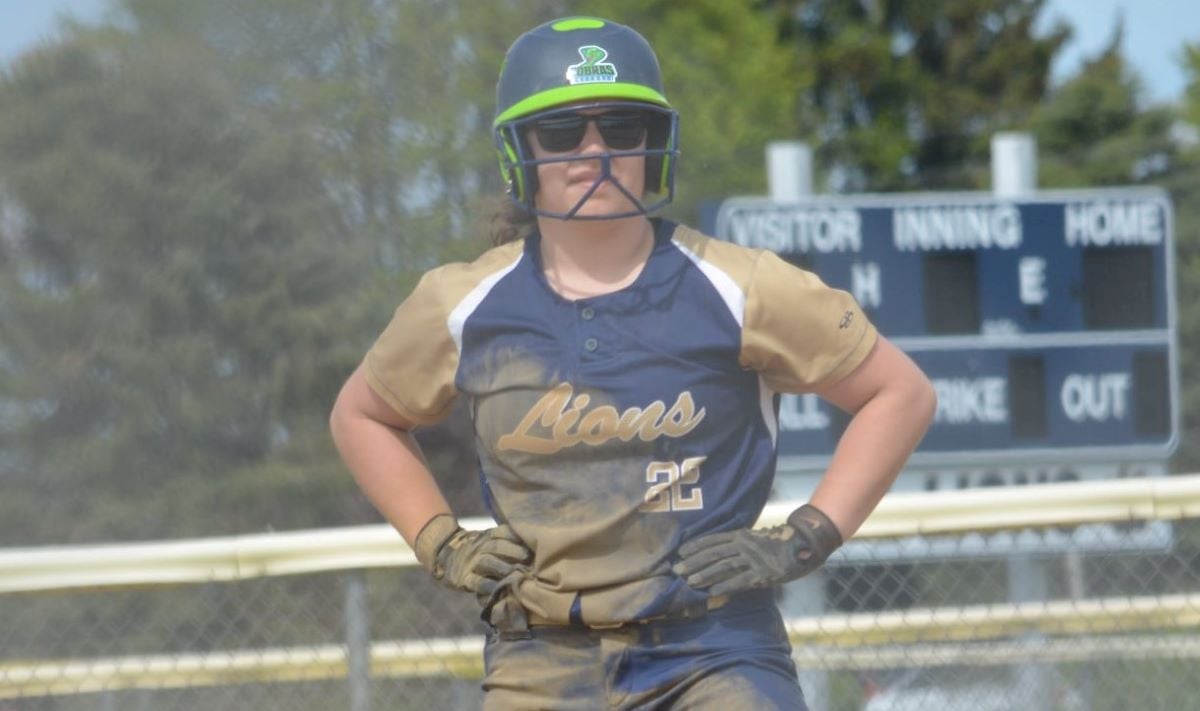 DUKE CENTER, Pa. – Leaving the tying run at second, seventh-seeded Clarion-Limestone held on to stun second-seeded Otto-Eldred, 8-7, in the District 9 Class 1A quarterfinals at Otto-Eldred.

The Lady Lions nearly blew a 7-0 lead when Otto-Eldred, down 8-2 to start the seventh, scored five times in the inning and had the tying run at second and the winning run at first following a walk to Kayley Heller.

But Regan Husted bore down and got Suzie Rounsville to ground back to the circle to seal the victory.

What looked like just another run in the top of the seventh by C-L proved to be a major insurance run for the Lady Lions.

Alyssa Wiant’s one-out single scored Husted, who had walked leading off the inning before going to second on a ground out, to make it 8-2 at the time.

But a one-out home run by Kate Rhinehart in the bottom of the seventh ignited a spark for the Lady Terrors.

Edahlia Sebastian and Kyla Andreano followed with singles putting runners on second and third following a C-L error before Husted got Katie Sheeler to strike out for the second out.

But Emmalee Sheeler walked on a full-count pitch to load the bases, and Bri Heller smacked a double to center scoring two to make it 8-5. Reilly Raught followed with a base hit to right scoring two more closing the gap to one, 8-7, and Kayley Heller walked.

C-L actually led 7-0 after four innings thanks to a three-run first and two runs both the third and fourth innings.

In the first, Kendall Dunn’s one-out triple scored Abby Himes, and Husted brought home Dunn with a two-out base hit. After wild pitch got Husted to second, Abby Knapp singled her home to make it 3-0.

The Lady Lions added two runs in the third with a Himes triple setting up the fourth run of the game for C-L with Himes scoring on a Dunn single. Dunn then scored on a sacrifice fly by Hhusted to put the score at 5-0.

More two-out lighting came in the fourth with Dunn’s pop single scoring two to make it 7-0.

Otto-Eldred started the comeback with a pair of runs in fifth on singles by Edahlia Sebastian singled home Kayley Heller and Katie Sheeler brought home Rhinehart.

Sebastian was 2-for-3 with a run scored and an RBI for Otto-Eldred with Bri Heller and Raught both going 1-for-4 with two RBIs. Heller also scored a run. Rhinehart was 1-for-2 with the home run, a walk, an RBI, and two runs scored.

Husted got the win going seven innings allowing seven runs, all earned, on seven hits and five walks while striking out seven.

The playoff win broke a five-game postseason losing streak over a 12-year period for C-L, which last won a postseason game, 4-0, over Northern Potter in the first round in 2009.

C-L will take on third-seeded Elk County Catholic, a 17-12 winner over Forest Area, in the semifinals at 3 p.m. Wednesday, May 26, at Brockway.

ST. MARYS, Pa. – Scoring 11 of its 17 runs in the third and sixth innings combined, third-seeded Elk County Catholic held off sixth-seeded and visiting Forest Area, 17-12, in the District 9 Class 1A quarterfinals at Benzinger Park in St. Marys.

The Lady Crusaders put a six-spot on the board in the third to take a 7-3 lead at the time and then added five runs in the sixth to build on what, at the time, was a 12-9 lead.

Lucy Klawuhn also doubled while going 2-for-5 with two RBIs and three runs scored, while Hope Farley was 2-for-3 with an RBI and two runs scored.

Gabby Weisner added four runs scored for the Lady Crusaders while going 1-for-2 with three walks and an RBI, and Reagan Bauer scored twice.

In all, the Lady Fires hit three homers on the afternoon with Jessica Wagner also going deep. Wagner was 1-for-5 with an RBI and two runs scored.

Mourer got the win going seven innings allowing 12 runs, nine earned, on 10 hits and eight walks while striking out nine.

Natalie Meyers took the loss going six innings allowing 17 runs, 13 earned, on 14 hits and six walks while striking out one.

ECC will take on seventh-seeded Clarion-Limestone, an 8-7 winner over second-seeded Otto-Eldred, in the semifinals at 3 p.m. Wednesday, May 26, at Brockway.

JOHNSONBURG, Pa. – In the lone Class 2A quarterfinal game, Johnsonburg had no trouble Mercy Ruling Kane for the third time this season, this time 10-0, in five innings at Knothole Park in Johnsonburg.

The Ramettes, winners of nine in a row, including the last five by a count of 62-3, got another strong outing in the circle from Julia Jones.

Jenna Pavlock led the Ramettes going 2-for-4 with a run scored and two RBIs. Maria Casilio was 1-for-2 with a walk and three runs scored, while Jones helped herself by going 1-for-1 with three walks and two runs scored.

Johnsonburg will face top-seeded Keystone in the semifinals at 3 p.m. Wednesday, May 26, at Heindl Field in DuBois.

Meals was 3-for-3 while adding a triple and a walk. She scored three times.

Meah Ielase added a 4-for-5 afternoon with a triple, two RBIs, and three runs scored with Rylan Strauser going 2-for-3 with a double and three RBIs.

Lizzy Hoovler was 1-for-3 with a triple, a run scored, and two RBIs to lead Oil City.

Port Allegany Moves into D9 2A Baseball Quarterfinals with Win Over Keystone
No Pressure: West Middlesex Holds on for Thrilling win over Eisenhower in Class 2A Quarterfinals