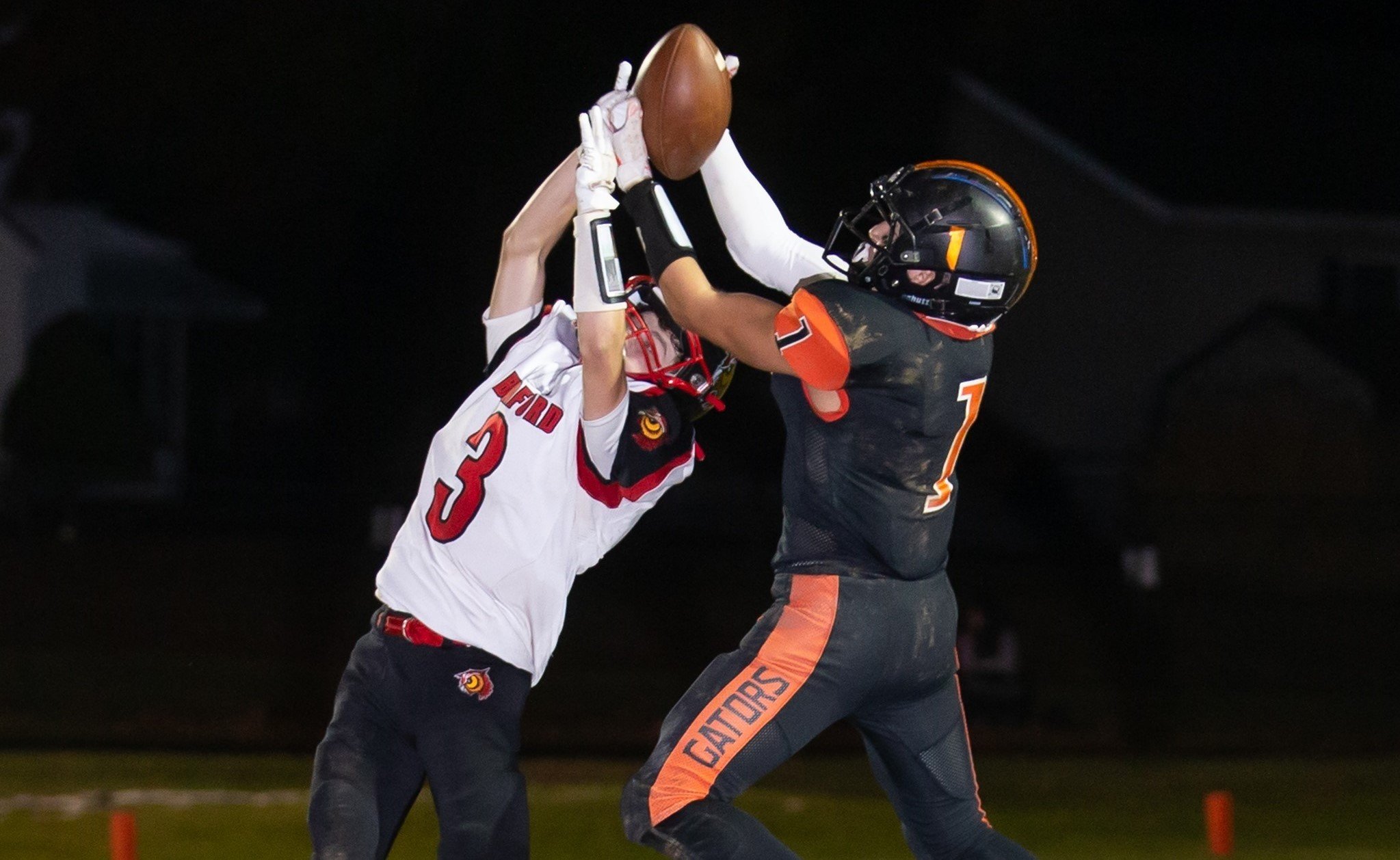 Trey Ayers of Port Allegany fights with Jarid Wilmoth of Bradford for a ball Friday night. Ayers helped the Gators to the victory. (Photo by Patrick Crants. See more of Crants work here.)

The Gators allowed a touchdown to Bradford in the middle of the first quarter on a 63-yard Austen Davis to Jake Pattison that put the Owls (0-6) up 8-0.

But Port Allegany answered with a 7-yard Noah Archer touchdown run followed by a Drew Evens to Peyton Stiles 2-point conversion that put the Gators up 8-6.

At the 4:15 mark, Evens hit Payton Spencer from six yards out to make it 22-6 following the 2-point play.

Then, at 3:19, Archer scored for the second time, this time from eight yards away, to set the final score.

Davis was 12 of 23 passing for 163 yards, a touchdown and an interception for Bradford with Pattison catching three passes for 69 yards and the score and Dalton Dixon grabbing four passes for 57 yards.

Crisp, one of two Crusaders backs to go over 100 yards, ran 19 times for 125 yards and three touchdowns and also returned an interception for a score. He was joined in the 100-yard club by Sam Kaul, who ran 10 times for 158 yards and a touchdown. Kaul also caught two passes for 35 yards.

Mason McAllister was 5-for-13 for 66 yards and a touchdown with the score going to Joe Tettis, who had two catches for 32 yards.

Dylan Baney threw a pair of touchdowns for Cameron County and was 9 of 28 for 188 yards while also throwing a pair of interceptions.

KANE, Pa. – Cole Sebastian threw for a pair of touchdowns and ran for a pair of scores as visiting Otto-Eldred outlasted Kane, 41-34.

But Otto-Eldred dipped into its bag of tricks using a 72-yard wide receiver pass from Ethan Smith to Jake Merry to break the tie.

Smith also caught one of the two touchdown tosses from Sebastian, while Josh Rhinehart had the other one on a 65-yard passing play.

In addition to the three Smith scores, Kane also got a pair of rushing touchdowns from Harley Morris.

CURWENSVILLE, Pa. – Despite only running offensive plays in three of the four quarters, Curwensville picked up its first win of the year, 36-0, over Bucktail.

Thad Butler rushed for a pair of touchdowns to help Curwensville defeat Bucktail, 36-0 to pick up their first victory of the year.

But once it got the ball, the Golden Tide responded going 96 yards in 11 plays to get on the board on a 4-yard Chase Irwin run.

A special team effort saw Duane Brady scoop up a blocked punt and return it to the end zone to help the Tide go up 29-0.

On the ensuing drive for the Bucks, Dylan Cross fumbled on a quarterback keeper that was picked up by Brady at midfield.

The Tide responded and scored their last touchdown of the game with Dan McGarry finding Ty Terry for a 50-yard touchdown pass.

McGarry finished the night going 11-of-13 for 114 yards while rushing eight times for 89 yards. Terry was the leading receiver with four catches for 89 yards.

Gage Sutliff was the workhorse for the Bucks rushing 27 times for 141 yards.

WEST SUNBURY, Pa. – J.D. Dessicino scored twice including on a 36-yard pass play on the first play of the fourth quarter that broke a tie game, and Moniteau went on to beat visiting Punxsutawney, 27-14, for its second win of the year over the winless Chucks.

Chaz McGuire added a 2-yard run later in the quarter to put the game away.

Punxsutawney (0-7) had a pair of first-half leads before Moniteau tied the game at 14 at the half.

Kameron Falgout had a pair of scoring runs in the first half for the Chucks finding the end zone on runs of 58 yards and 1 yard. He ran 22 times for 167 yards and was 5 of 13 passing for 67 yards.

McGuire ran 15 times for 72 yards and the touchdown to lead Moniteau while catching one pass for 17 yards. Mershimer added 11 carries for 70 yards and Dessino had eight carries for 28 yards and one catch for 36.

Alex Phillips had three catches for 60 yards for Punxsutawney, while Zeke Bennett had 48 yards rushing.

BROCKWAY, Pa. – DuBois scored in six different ways on its way to a 49-0 win at Brockway, in the teams first meeting against each other since 1928 despite the schools being just 10 miles apart.

Ruben Estrada then scored twice to make it 19-0 at halftime catching a 14-yard pass from Cam-Ron Hays and then scoring on a 6-yard run.

The scoring started at the 8:43 mark of the quarter on another safety before Derraick Burkett returned the ensuing free kick 74 yards for another touchdown to make it 35-0 and put the Mercy Rule into motion.

Henery 15 times for 96 yards with Estrada adding 12 carries for 58 yards. Hays was 7 of 17 passing for 155 yards and the touchdown but was also intercepted three times. Dale Kot caught five passes for 121 yards and also intercepted a pair of passes on defense.

Friday’s D-10 Regular Season Recaps: Eisenhower Moves To 7-0
Weather Forces Schedule Changes For District 10, Including Class 2A Semifinal
We use cookies on our website to give you the most relevant experience by remembering your preferences and repeat visits. By clicking “Accept All”, you consent to the use of ALL the cookies. However, you may visit "Cookie Settings" to provide a controlled consent.
Cookie SettingsAccept All
Manage consent