D9 playoffs: Bison vs. Bisons as Janocko goes for 300th 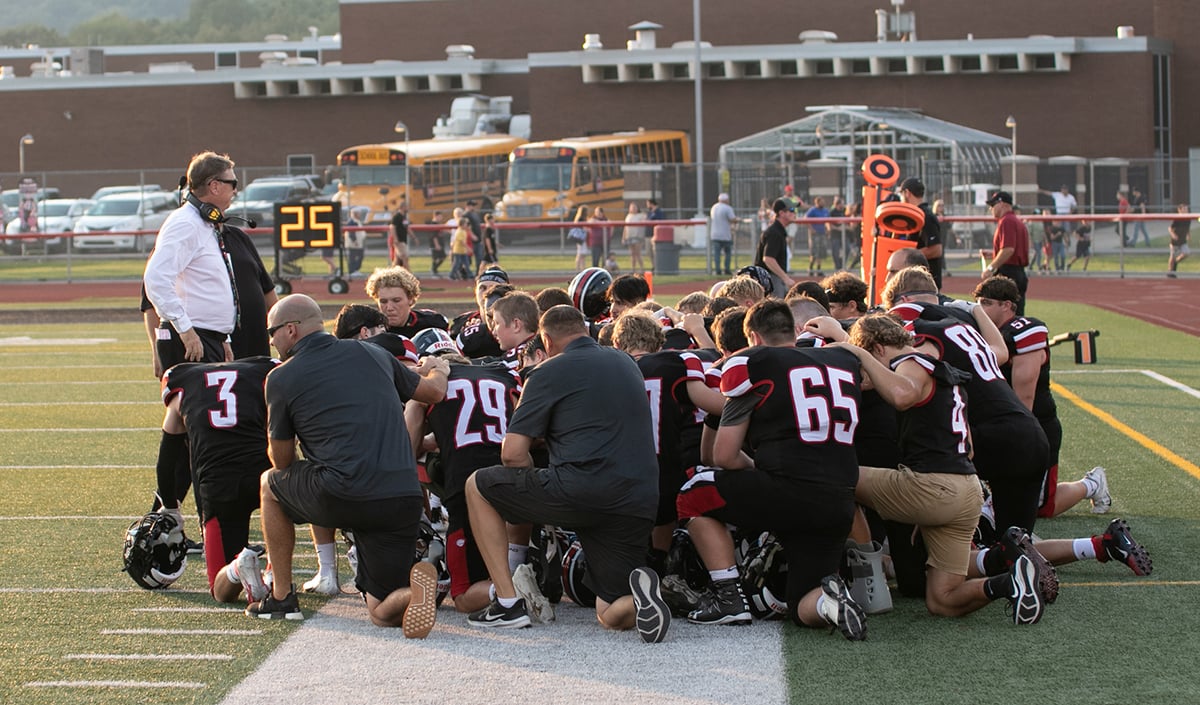 Clearfield Bison head coach Tim Janocko, left, huddling with the team prior to their season-opener against DuBois back in August, takes his team into Friday's playoff game with Bradford sporting a 299-116-3 career record. There are only four other active coaches in the state with 300 or more wins.Photo by Jared Bakaysa of JB Graphics. See more of Bakaysa's work here

From there, it’s a set of semifinal round games in Class 1A and 2A.

In Class 1A, top-seeded Redbank Valley comes off its bye week and hosts No. 5 seed Port Allegany while in Rimersburg, No. 2 seed Union/A-C Valley hosts No. 3 seed Smethport.

With a week off, all four Class 2A playoff teams get back to work with No. 1 seed Karns City hosting No. 4 seed Central Clarion and No. 2 seed Ridgway hosting No. 3 Brookville.

All kickoffs are scheduled for 7 p.m.

Clearfield head coach Tim Janocko’s unbeaten team captured last week’s D9 title with a 49-27 victory over St. Marys. It was win No. 299 for Janocko in his 36th season.

To put that in perspective, there are only four coaches active in the state with more wins (going into the season as per EasternPAFootball.com here) and overall, there are 19 with 300 or more wins.

The Bison of Clearfield and Bisons of Bedford met last year and Bedford won the first-ever football meeting between the two — The Proper Grammar Bowl II if you will, although Clearfield used the “s” for many, many years prior to correcting the english — in a 40-21 victory. Bedford went on and beat Central-Martinsburg and Hickory before losing to WPIAL champion and eventual state champion Central Valley, 49-20, in the state semifinals.

Swaim, at linebacker/safety, leads the defense with 7.7 tackles per game along with Sam Sheppard (5.1), Josiah Weyandt (4.9) and Trent Fichtner (4.8) with Weyandt lead the team with eight sacks and Ressler topping the secondary with five interceptions.

Clearfield’s defense has posted impressive numbers this year, allowing just 74 points, or 6.7 points per game while giving up only 141 yards per game. The raw numbers are naturally sharp — foes have rushed for 318 yards on 259 attempts while completing 120 of 247 passes for 1,229 yards with 11 interceptions.

Billotte, a Kent State recruit, is one of three players with a double-digit sack total. His 10 trails Isaac Samsel and Kovalick who both have 11 1/2 sacks. Nate Natoli has a team-high three interceptions.

Friday’s winner gets the District 6 champion — Central-Martinsburg and Penn Cambria meet at Altoona’s Mansion Park at the same time — in the first round of the state playoffs next week at a site and time to be announced.

In Friday’s other games:

The Gators and Bulldogs haven’t met on the field since 2010 and the Gators are coming off their first playoff win in nine years with last week’s 14-12 win at Keystone.

So the defending champion Bulldogs might be a little disappointed about not getting a chance to avenge their lone loss to Keystone in a season-opening 22-20 setback. But since then, they’ve done very little wrong with nine straight wins.

The Bulldogs’ defense, like last year, has pretty much set the tone for the season. It’s limited opposing offenses to just 84.9 yards per game with 13 interceptions and 27 turnovers overall.

Individually, the Bulldogs have Zeldon Fisher (6.5), Joe Mansfield (5.2), Brenden Shreckengost (4.7) and Brandon Ross (4.5) at the top of the tackles per game leaderboard. Mansfield has 8 1/2 sacks with Ross at five while Ashton Kahle has four interceptions.

Ten of the Bulldogs’ 63 TDs are from the defense or special teams — Kahle has four punt returns.

Shreckengost leads the running game with 585 yards on 113 carries with 11 TDs.

Despite the balanced offense for the season, the Gators have thrown the ball just eight passes in the past two games for a whopping nine yards.

Last week, the Gators controlled the clock and ran for 215 yards, getting 97 yards from Archer and 96 from Moses while Evens ran for both TDs.

Moses is the top tackler on defense at 7.6 stops per game. Evens and Archer each have three interceptions.

The Hubbers advanced to the semifinals with a 46-27 shootout win over Curwensville while the Falcon Knights won their first playoff game as a co-operative program in a 31-6 win over Cameron County.

It’s a second straight home game for the Falcon Knights, who were knocked out of the playoffs in the first round two of the past three years by Smethport. Last year, the Hubbers edged the Falcon Knights 12-10 before losing 20-6 to Redbank Valley in the final.

Hubbers is senior quarterback Noah Lent. He missed the Hubbers’ 6-0 loss to Coudersport with an injury and returned for last week’s game in which he completed 6 of 8 passes for 117 yards and two TDs while rushing for 171 yards on 24 carries with two TDs. He was hurt during the game, but his status this week isn’t certain.

Union/ACV’s defense has been a big key to its success, giving up just 145 yards per game with 20 interceptions. Carter Terwint (6.6), Card (5.3), Landon Chalmers (4.7), Colton Murray (4.4) and Andrew Verostek (4.3) are the leading tacklers per game while Chalmers has eight sacks and Roxbury eight interceptions.

The Raiders knocked the Elkers out of last year’s playoffs in the semifinals with a 49-15 win in Brookville, so it’s a rematch on the other field this year with the winner advancing to face either Karns City or Central Clarion next week.

The Elkers already avenged that loss, sort of, beating the Raiders 14-13 on the road on back on Oct. 22. Ridgway scored twice before holding off Brookville’s fourth-quarter rally that fell short on a blocked point-after kick that would’ve tied the game.

Dom Allegretto’s 66-yard TD run in the second quarter and 25-yard pass to Eric Hoffman in the third quarter were Ridgway’s touchdowns. Allegretto started at quarterback and completed 9 of 18 passes for 157 yards. Prior to that, Jonathan Hinton and Cameron Larkin had done most of the quarterbacking and combined for 1,070 yards with 10 TDs and five interceptions. Allegretto also started at QB in the regular-season finale against Philipsburg-Osceola and threw just three passes while still playing a big role in the running game, gaining 139 yards on nine carries.

Hunter Smith (8.0), Carson Weaver (7.0), Zimmerman (6.4), Bryce Weaver (5.2) and Lindermuth (5.0) are the leading tacklers per game for the Raiders. Smith has eight sacks while Kunselman owns seven of the team’s 19 interceptions.

But that’s been awhile since that matchup and the Wildcats were in the midst of an 0-4 start to the season before finishing the schedule by taking four of five. Karns City’s lone red mark on its season so far is a 35-28 loss to St. Marys in Week 6 that cost the Gremlins the District 9 League Large School Division title.

Hummell leads the defense with 13.4 tackles per game while also sharing the team lead in interceptions with Brady Quinn with three. Tackles per game leaders behind Hummell are Noah Naser (9.6), Kaoz Baker (7.9) and Kolten Bradley (7.3).

First Set of Champions to be Crowned in District 10 Football This Week
D9and10Sport to Video Broadcast Central Clarion County at Karns City District 9 Class 2A Football Semifinal Game Friday
We use cookies on our website to give you the most relevant experience by remembering your preferences and repeat visits. By clicking “Accept All”, you consent to the use of ALL the cookies. However, you may visit "Cookie Settings" to provide a controlled consent.
Cookie SettingsAccept All
Manage consent