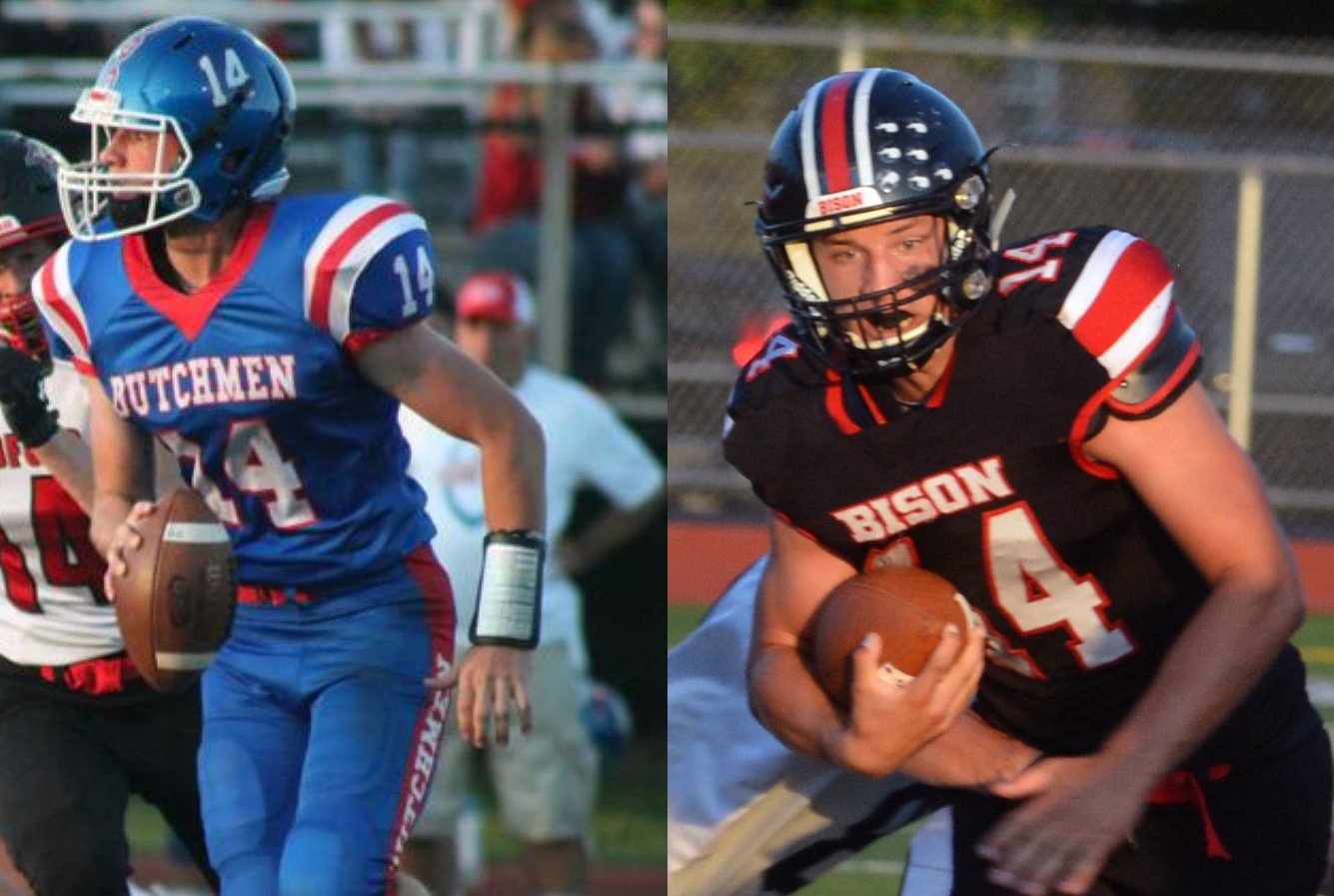 BROCKWAY — Meeting once again for the District 9 Class 3A title, the unbeaten Clearfield Bison tangle with the St. Marys Flying Dutchmen Friday night at Varischetti Field.

It’s one of five games playoff games scheduled involving District 9 teams with three in the Class 1A quarterfinals and another in the District 6-8-9 Class 4A Sub-Regional.

With a seven-team bracket in Class 1A and top-seeded Redbank Valley getting a bye, three games get things going on Friday all at 7 p.m. with No. 2 seed Union/A-C Valley hosting No. 7 Cameron County, No. 3 Smethport hosting Curwensville and No. 4 Keystone hosting No. 5 Port Allegany.

DuBois is in a semifinal game in its Sub-Regional showdown with Pittsburgh City League (District 8) member University Prep.

Since D9 had three weeks to complete its Class 2A bracket and only four teams entered, those semifinals — Brookville at Ridgway and Central Clarion at Karns City — are scheduled for next week.

The Bison are an annual D9 title contender as their 14 titles attest. They’ve won eight since 2010 and two of the last three, including last year’s win over the Dutch.

In that one, the Bison led 41-16 late in the fourth quarter before the Dutch scored two touchdowns to set the margin.

Clearfield intercepted Dutch quarterback Christian Coudriet four times, two of those returned for touchdowns and another occurring in the end zone to stop a Dutch scoring chance in the third quarter.

Bison quarterback and Kent State recruit Oliver Billotte completed 11 of 19 passes for 210 yards while Coudriet was 35-for-55 for 326 yards and four TDs to go along with his four interceptions.

This year, Billotte anchors the offense along with helping a strong defense that’s spun five shutouts and given up just six touchdowns all season.

Hayden Kovalick (8.0), Billotte (6.6) and Shane Coudriet (7.4) are the team’s leaders in tackles per game on the defensive side of the ball. Kovalick and Billotte have 10 1/2 and 10 sacks respectively.

Conner Straub (9.9), Eli Rippey (7.8), Alex Lukaschunis (7.8), Mosier (7.2) and Layton Ryan (7.1) are the tackles per game leaders for the Dutch, who had their eight-game winning streak snapped last week against Tyrone in a 28-14 loss that saw head coach Chris Dworek pull his starters in the second half.

Here’s a look at Friday’s other postseason games. All have 7 p.m. kickoffs:

The two big questions for this one are: 1. Will Noah Lent play? 2. How good are the Golden Tide?

Lent, the do-it-all high-usage senior quarterback for the Hubbers, missed the Hubbers’ 6-0 loss to Coudersport two weeks ago. So with more time off following a bye week, his status would certainly be vital to the Hubbers’ chances, and he’s expected to play.

The Golden Tide bolted to a District 6 schedule this year, leaving the District 9 League although they are a District 9 team of course. The Tide were 1-8 and 1-6 the last two years before turning things around with a winning season.

A lot of that has to do with the current key players just progressing since some were called on to play as youngsters the past two seasons. Quarterback Dan McGarry completed 46 passes for 399 yards as a freshman. Now as a junior, McGarry has put together a stellar season with 2,003 yards and 16 TDs against nine interceptions while completing 158 of 264 passes. His top receiving target, senior Ty Terry, caught one pass for two yards as a sophomore two years ago. This year, he’s grabbed 62 passes for 910 yards and eight TDs.

Five of the top nine tacklers two years ago were sophomores, so that group is also still around two years later to help the Tide win some games.

Mullins has booted 20 touchbacks on kickoffs, averages 39.4 yards per punt and has converted on 4 of 5 field goals.

The Tide defense has senior Collin Jacobson (10.3), McGarry (8.0) and senior Andrew Freyer (7.2) as the tackles per game leaders. Terry has four interceptions.

Two weeks ago against Coudersport, the Hubbers played without Lent and were blanked by the Falcons, managing just 60 yards of offense. Prior to that, however, a Lent-dominated offense churned out plenty of numbers with him carrying the workload.

Lent has accounted for over 75 percent of his team’s offensive yardage for the season, including the missed game, rushing for a team-high 1,382 yards on 152 carries with 22 TDs. He’s thrown for 751 yards and 15 TDs, completing  44 of 80 passes with just two interceptions.

Defensively, Travis Cooney (8.9) and Ryan Mason (5.9) are the tackles per game leaders with Cooney’s seven sacks leading the unit.

It’s the second matchup between the Panthers and Gators this year, the first one the Panthers winning on the road, 36-30, back in Week 2.

In that one, it took Bret Wingard’s 82-yard TD pass to Kyle Nellis with 2:21 remaining in the game to notch the win for the Panthers, who were outgained by the Gators 443-317.

Port’s Noah Archer had a huge game, rushing for 192 yards on 19 carries with two TDs while catching four passes for 111 yards and both of quarterback Drew Evens’ TD strikes. Evens completed 12 of 28 passes for 208 yards, but was intercepted four times, twice by the Panthers’ Zander McHenry.

It’s the first playoff game to be played at Vidunas Stadium in Rimersburg since the Union Knights were handled by Elk County Catholic, 30-6, in the first round of the 2012 playoffs.

Since then, the Knights have co-opted with A-C Valley and that combination has lost postseason openers the past three seasons — 12-10 at Smethport last year, 32-6 to Redbank Valley at Clarion University in 2019 and 28-0 at Smethport in 2018.

The Union Knights never won a playoff game. The last and only A-C Valley playoff win was way back in 1999 when the Falcons beat Bradford, 22-21, in the Class 3A semifinals before losing 23-19 to Clearfield in the championship game.

As the No. 2 seed, the Falcon Knights are favored against a team they beat 20-6 back on Oct. 14 in Emporium. In that one, the Red Raiders took the initial lead on Dylan Reider’s punt return, but the Falcon Knights tied the game before halftime, then scored in two of their first three possessions of the third quarter.

Carter Terwint (6.5), Card (5.2) and Landon Chalmers (4.6) lead the Falcon Knights in tackles per game. Chalmers has eight sacks while Roxbury leads the team with seven interceptions.

The Beavers take another crack at ending a postseason drought that’s gone 13 games in 20 seasons dating back to their last playoff win in a 24-0 shutout of Hollidaysburg way back in 1996.

For Prep, coached by Lou Berry, senior receiver-defensive back Rashan Murray is an Akron recruit. Sophomore Amare Gee is also a receiver-DB. Senior Robert Arms is a three-year starter on the line. Keon Smalls is the quarterback. He threw for two TDs and ran for two more in Prep’s 36-8 win over Perry.

Justin Bankovich (8.4) and Christian Kirk (8.3) are the top tacklers per game.

The winner meets the winner of the other semifinal between the Bellefonte (2-7) at Juniata (8-2) game that’s scheduled for Saturday at Altoona’s Mansion Park starting at 6 p.m.