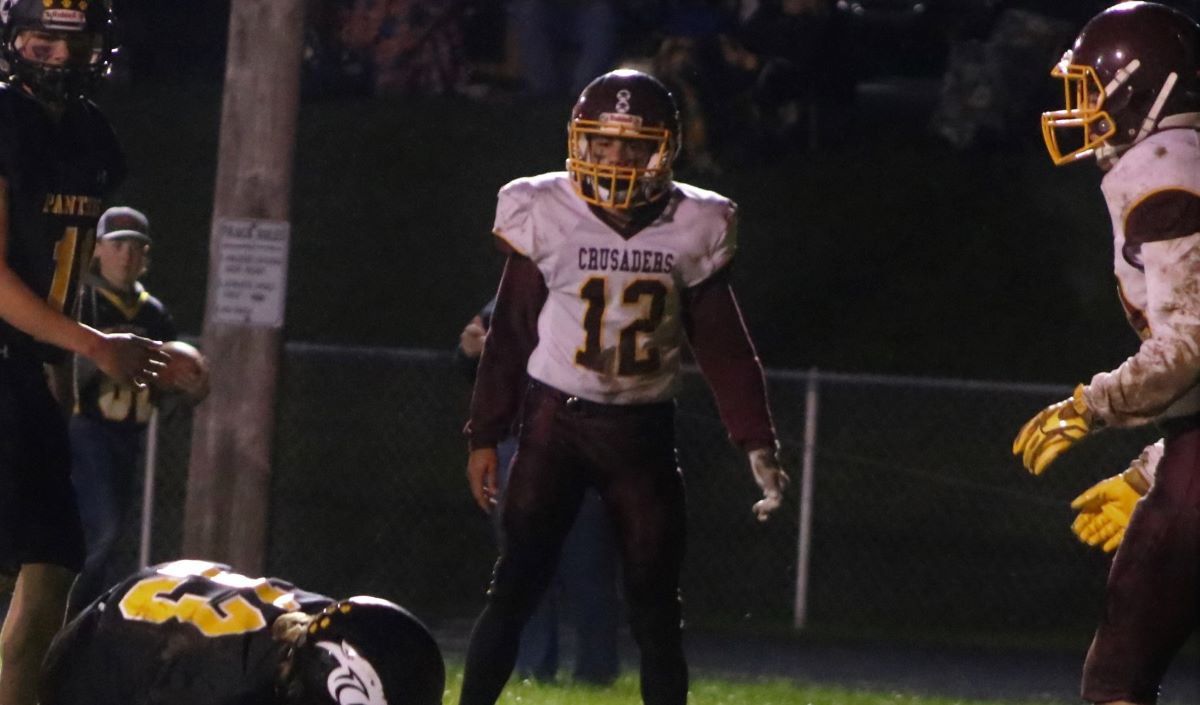 Two of those teams will eventually meet as the Bulldogs host the Wildcats in Week 10. The Crusaders, playing in Region 3, plays 3-1 Otto-Eldred for the second time this Friday night as part of the district’s 13-game schedule with 11 Friday games and two Saturday afternoon matchups.

In other games, it’s a three-game Region 2 schedule headed by a Saturday afternoon clash when Brockway (2-2) travels to Port Allegany (3-1), one of the more interesting showdowns of the weekend. Friday, Kane (1-3) visits Union/A-C Valley (2-2) in Rimersburg while Smethport (1-3) hosts Keystone (3-1).

The only one Region 3 game has Cameron County (0-4) hosting Coudersport (2-2) with the other scheduled matchups not counting in the standings since they are repeat games.

District 9’s teams are District 6 schedules with Clearfield in the Moutain League and Curwensville in the Inter-County Conference. The Bison (3-1) host Penns Valley (3-1) while Curwensville (2-2) treks to winless Everett (0-4).

The Crusaders obviously beat the Terrors the first time around, 35-30, in the season-opener, so this one is not a Region 3 game, just a non-region matchup. Their game next week at home with Coudersport is the only other team with a winning record on the schedule at this point.

They’ll play Sheffield and Bucktail again in what could be an unbeaten season. After opening with the win over the Terrors, the Crusaders have beaten one-win Moniteau (15-6) and Bucktail (30-16), and winless Sheffield (57-0).

The point of the breakdown is that it will be very interesting how the D9 playoff committee will sort things out on where the Crusaders and Terrors as well, with clearly a much easier schedule than the Class 1A teams that play in Region 2, line up in the seeding along with Curwensville which plays zero teams in District 9. It’s a committee approach and not an exclusive math formula standings system used in past years.

Right now, there are nine Class 1A teams with .500 or better records and a maximum of eight teams qualify for the postseason — ECC and Redbank Valley at 4-0, Port Allegany, Keystone and the Terrors at 3-1, and Union/ACV, Curwensville Brockway and Coudersport at 2-2.

The Crusaders’ statistics are unavailable on Max Preps, but they ran for 296 yards in last week’s 57-0 rout of Sheffield. Charlie Geci ran for 74 yards on 12 carries while Noah Cherry ran for 52 yards on six carries. Ben Reynolds ran for a touchdown and threw for a TD pass to Cherry.

In their first matchup, the Crusaders outlasted the Terrors in a Saturday matchup as Cherry ran for 181 yards and two touchdowns while Reynolds had 113 yards on 16 carries.

Another interesting game that’ll help solidify not only the Region 2, but also the Class 1A playoff picture is Saturday afternoon’s Brockway at Port Allegany game that kicks off at 1:30 p.m. The Rovers and Gators met last year for the first time in four seasons and the Gators squeezed out a 26-21 win.

This time around, the Rovers head north coming off a 26-20 loss to Union/A-C Valley. Their other loss was a one-point 27-26 loss to DuBois while they opened with a 28-25 win over Kane. The only blowout was a 70-16 rout of Coudersport.

Thus far, the teams don’t share a common foe, although that’ll change over the next two weeks as the Gators visit Kane and Union/ACV.

Here’s a closer look at other games this week:

The Beavers host the Raiders at Mansell Stadium. Both teams are coming off a win, the Raiders their first in a rare 7-0 victory (first winning score like that since 1983) and the Beavers a 39-20 rout of Bradford.

Senior quarterback Cam-Ron Hays leads the Beavers, who move the ball mostly on the ground. Hays is the trigger man, rushing for a team-high 230 yards on 31 carries and six TDs while passing for 198 yards with one TD and one interception, completing 23 of 40 passes. Dalton Yale (46-221, 1 TD) and Austin Henery (37-173, 4 TDs) will also get the ball out of the backfield.

The Raiders got a career-high 132 yards on 19 carries from Jackson Zimmerman last week while sophomore Easton Belfiore, in his second start at quarterback, threw a 75-yard TD pass to Noah Peterson for the only TD in last week’s win. Belfiore has completed 20 of 36 for 335 yards and four TDs with two interceptions so far. Brayden Kunselman (14-159, 2 TDs) and Peterson (8-148, 2 TDs) are the team’s top two receivers.

The Gremlins didn’t throw a pass in the win over the Dutch and didn’t complete a pass for the second straight week as Levi Hawk ran for 99 yards on 17 carries, Nathan Hess 54 yards on 15 carries and Cooper Coyle 52 yards on 12 carries.

Both the Dutch and Chucks look to shake off losses, the Dutch a frustrating 14-6 loss at Karns City and the Chucks in a turnover-filled 45-7 rout to Central Clarion.

The Chucks played without starting quarterback Seth Miller last week and committed seven turnovers against the Wildcats, including three interceptions. Running back Zeke Bennett is among the district’s top rushers with 650 yards on 97 carries and nine TDs.

The Wildcats head to McKean County to face the winless Owls, whose losing streak hit 21 games after last week’s 49-20 loss to DuBois. The Wildcats are coming off a 45-7 rout of Punxsutawney in which they forced seven turnovers. For the season, they’re up to 24 forced turnovers.

The Bulldogs head to Johnsonburg’s Memorial Field to face the winless Elkers. The Bulldogs are averaging 37 points and 391 offensive yards per game against an Elkers team that had scored 12 points in their first three games before putting up 27 points in the 48-27 loss to Kane last week.

The Elkers generated some offense, but gave up a whopping 533 yards to the Wolves, who ran for 434 yards. Elkers running back Aiden Zimmerman ran for 62 yards on nine carries with a touchdown last week, but no Ridgway rusher has more than 100 yards. Quarterback Cam Larkin had completed 14 of 39 passes for 139 yards and two TDs with four interceptions going into last week’s game.

While the Wolves lit up Ridgway with a 500-yard offensive day on the field for their first win in a 48-27 victory, the Falcon Knights stopped a two-game losing streak with a 26-20 win at Brockway.

These teams have never met since the Falcon Knights started their co-op prior to the 2016 season.

The Panthers and Hubbers come off losses, the Panthers their first in a 42-7 loss at Redbank Valley and the Hubbers their second straight shutout loss in a 16-0 setback at Coudersport.

Smethport’s season statistics are not available on Max Preps, but last week, the Hubbers got 74 yards rushing from Ryan Pelchy and 87 yards passing from Preston Alfieri who completed 7 of 15 passes.

The Falcons travel to Emporium to face the winless Red Raiders looking to get over .500 and stay in the District 9 Class 1A playoff mix. They blanked Smethport 16-0 last week and face a Red Raiders team that was routed at Port Allegany (46-0) last week and lost to Smethport (22-6) in Week 2.

Coudersport is a run-heavy offense led by quarterback Gavyn Ayers, who was 8-for-22 for 181 yards with two TDs and four interceptions before last week’s win. He’s rushed for 129 yards on 39 carries with a team-high five TDs. Other runners are Xander Brown (35-115) and team leader Ethan Ott (47-209).

Cameron quarterback Maddox Baughman has thrown for 362 yards. Logan Reed was the leading rusher (32-115) going into last week’s game in which Port limited the Red Raiders to minus-two yards rushing.

The Bison have won three straight since an opening loss to Juniata with BEA, DuBois (41-7) and Philipsburg-Osceola (55-0) last week. Last week, quarterback Will Domico was perfect, completing 8 of 8 passes for 249 yards with five TDs. Jacob Samsel and Carter Freeland both went over 100 yards receiving while Brady Collins ran for 122 yards on eight carries.

All of the big stats helped bolster the Bison passing game that had thrown for just 68 yards going into the Mounties rout. Collins has now rushed for 453 yards on 57 carries with five TDs.

Curwensville faces winless Everett, a Bedford County school via just under two hours away. The Warriors lost 53-6 last week at Bellwood-Antis. The Tide lost to the Blue Deviis 40-14 in Week 3.

It’s the second time around for these teams as this one won’t count in the Region 3 standings. The Bucks beat the Wolverines, 42-12, in Week 1. Braylon Fantaski threw and ran for a touchdown while scoring a defensive TD. He rushed for 120 yards on eight carries.

Jeremiah Richardson ran for 91 yards on 15 carries with a TD for the Wolverines, who have lost 14 straight games.