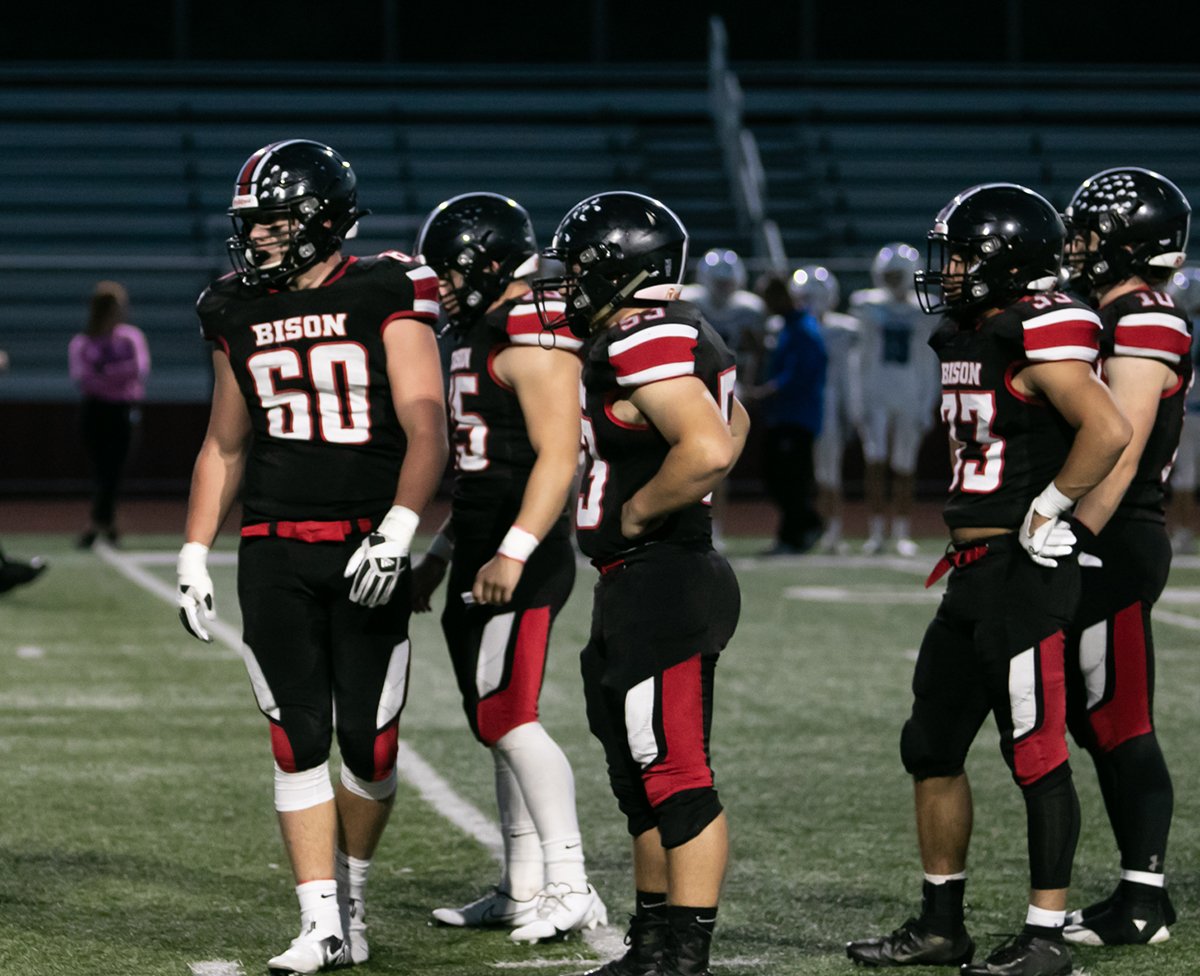 Clearfield's Hayden Kovalick (60) and the rest of the Bison defense have strung together three straight shutout wins going into Friday's trip to Huntingdon. Photo by Jared Bakaysa of JB Graphics. See more of Bakaysa's work here

The two teams at the top of the Small School divisions lock up Friday night as part of a 12-game schedule for Week 8 in District 9 football.

Port Allegany (2-4) and Elk County Catholic (2-4) might be other D9 playoff hopefuls, so expect at least six or seven teams to go to the postseason.

The standings are based on wins and what size of school one beats and how many wins it accumulates, but D9 does not divide by amount of games played even though that appears to be a varying number among teams.

In the Large School Division, St. Marys (6-1) heads to Moniteau (1-5) with control of its own destiny when it comes to the division title. With the Dutch up a game in the loss column against the team that beat them in the season-opener — Ridgway — and the head-to-head tiebreaker in their favor against Karns City, they can win out against the Warriors and Kane next week to take the title.

In the Mountain League, the district’s lone undefeated team Clearfield (7-0) visits Huntingdon (0-7) with a three-game shutout streak going strong while Curwensville (4-3) travels to Southern Huntingdon (4-3) in the Inter-County Conference.

The Panthers try to rebound from last Thursday’s 26-24 loss at home to Union/A-C Valley, their first loss of the season, although they still can claim the South Division title with help from Redbank Valley next week if the Bulldogs beat the Falcon Knights.

More important perhaps is solidifying their playoff positioning in Class 1A, which also applies to Smethport which lost its only game two weeks ago to Redbank Valley (27-6), which fell to Keystone (22-20) in the season-opener.

The Hubbers blanked Cameron County, 28-0, last week and quarterback Noah Lent continued his remarkable run through the season, accounting for all four Hubbers touchdowns with three TDs rushing and one passing. He ran for 157 yards on 16 carries while completing just two passes for 32 yards, one going for a TD to Alex Ognen.

Of the Hubbers’ 337 yards per game offensively, Lent accounts for 81 percent of that total.

Keystone averages 264 yards per game offensively, with Kyle Nellis (93-527, 4 TDs) leading the team in rushing while also giving them three non-offensive TDs with three on two interception returns and one kick return, two of those coming in last week’s loss to Union/ACV.

While both are hoping St. Marys gets upset for any chance of a Large School title, it’s also an important Class 2A playoff positioning matchup.

One could see that being the field in whatever order in a six-team setup considering Moniteau is 1-5. That would mean the top two seeds get a first-round bye. The Elkers visit Brookville next week.

The Wolves host the Raiders looking to bolster a playoff push. They finish the regular season with trips to St. Marys and Port Allegany, so they’ll presumably need to win two of those games to put a postseason resume on the table.

The Dutch need to hold serve with their remaining division games, finishing with Kane at home next week, to win the Large School title thanks to getting help from Central Clarion in its win over Ridgway last week.

Moniteau was routed 51-7 last week at DuBois after a 39-6 loss at Brookville. The Dutch beat the Beavers 14-7 and Raiders last week.

The Wildcats started the season 0-4 but have won two straight games going into their trip to winless Bradford, which owns the longest active D9 losing streak at 16 straight games.

Quarterbacks Talan Reese, a freshman and senior Elijah Fitton have combined to through for just over 1,900 yards and 15 TDs against 20 interceptions. Dalton Dixon (41-797, 7 TDs) is the top receiver.

The Owls have allowed 42.2 points per game and 392 rushing yards over the past four games, including 367 last week to previously winless Punxsutawney.

The Chucks ended their winless run with a win over Bradford while the Beavers roughed up Moniteau for their fourth straight win after starting the season with three losses.

The Beavers have scored 106 points in their last two wins over Moniteau and Bradford and yielded just three TDs in their four wins.

DuBois averages a modest 264 yards per game offensively as quarterbacks Austin Mitchell and Cam-Ron Hays have combined to throw for 680 yards and four TDs against five interceptions. Mitchell is the second-leading rusher at 263 yards on 48 carries and a team-high five TDs. Austin Henery (53-285, 3 TDs) is the leading rusher while Braxton Adams (44-212, 4 TDs) will get carries. Derraick Burkett (27-266, 4 TDs) is their top receiver.

The Bucks head to Duke Center looking for their first win of the year while the Terrors try to rebound from an unlikely loss to Coudersport last week,

The Terrors led by 22 points midway through the fourth quarter before dropping a 30-28 game to Coudersport while the Bucks lost 49-6 to Redbank Valley. The Falcons beat the Bucks 44-24 two weeks ago.

For Otto-Eldred, quarterback Gavin Jimerson has thrown for 532 yards and three touchdowns while Ryan Love (60-321, 4 TDs) is the leading rusher.

Bucktail was limited to 71 yards of offense in the loss to Redbank Valley. Quarterback Dylan Cross threw a TD pass to Braylon Frantaski for the lone score.

The game certainly doesn’t carry the same impact as their last three matchups when the Bulldogs beat the Falcons in last year’s Class 1A semifinals, or the year before when the Falcons routed the Bulldogs in the regular season then beat them in the district final. However, both teams are still trying to strengthen their playoff situation.

The Falcons are coming off an unlikely 30-28 win over Otto-Eldred thanks to a 24-0 run late in the game. The Bulldogs beat Otto-Eldred (59-6) earlier this season.

Ray Shreckengost (68-340, 8 TDs) is the leading rusher while return specialist Ashton Kahle returned his fourth punt for a touchdown last week. The Bulldogs have scored eight non-offensive touchdowns this year.

The Rovers won their second straight game last week against Elk County Catholic, their 34-7 win stopping a four-game losing streak. They’ll meet Port Allegany, which found and lost its game with Wellsboro 38-12. Two weeks ago, the Gators lost 41-8 to Union/A-C Valley, which the Rovers beat 28-20 in the season-opener.

The Crusaders host winless Sheffield trying to end a four-game losing streak that also included a canceled game and a loss to Union/A-C Valley that lasted until just halftime.

The Wolverines have lost nine straight — one game last year, and two at the end of 2019 — games and this year, they’ve been outscored 356-28 this year. Their game last week against Port Allegany was canceled due to COVID-19 concerns within Sheffield and Abraxas, which co-ops for the football program.

The Bison haven’t given up points since the end of their 42-12 win at Tyrone. Since then, it’s been shutout wins over Bellefonte (48-0), Philipsburg-Osceola (49-0) and Trinity (30-0) last week. For the year, they’ve allowed just four touchdowns all season while averaging 38.6 points per game.

Quarterback Oliver Billotte has thrown for 916 yards (57-for-108, 9 TDs, 2 Ints.) and rushed for 331 yards and nine TDs while leading the defense in tackles with 51, including nine sacks. Hayden Kovalick and Shane Coudriet each have 50 tackles, Kovalick second on the team with  7.5 sacks.

The Bearcats have scored 34 points in their six games on the field — they’re listed as forfeiting to Tyrone — including a 7-6 loss to Philipsburg-Osceola, which fell 49-0 to the Bison two weeks ago.

The Golden Tide travel to Orbisonia, just south of Mount Union in Huntingdon County, looking to get by the Rockets and keep their playoff resume improving.

2021 District 9 and District 10 Week 8 Football Predictions
Union/A-C Valley Grinds Out Win over Cameron County
We use cookies on our website to give you the most relevant experience by remembering your preferences and repeat visits. By clicking “Accept All”, you consent to the use of ALL the cookies. However, you may visit "Cookie Settings" to provide a controlled consent.
Cookie SettingsAccept All
Manage consent