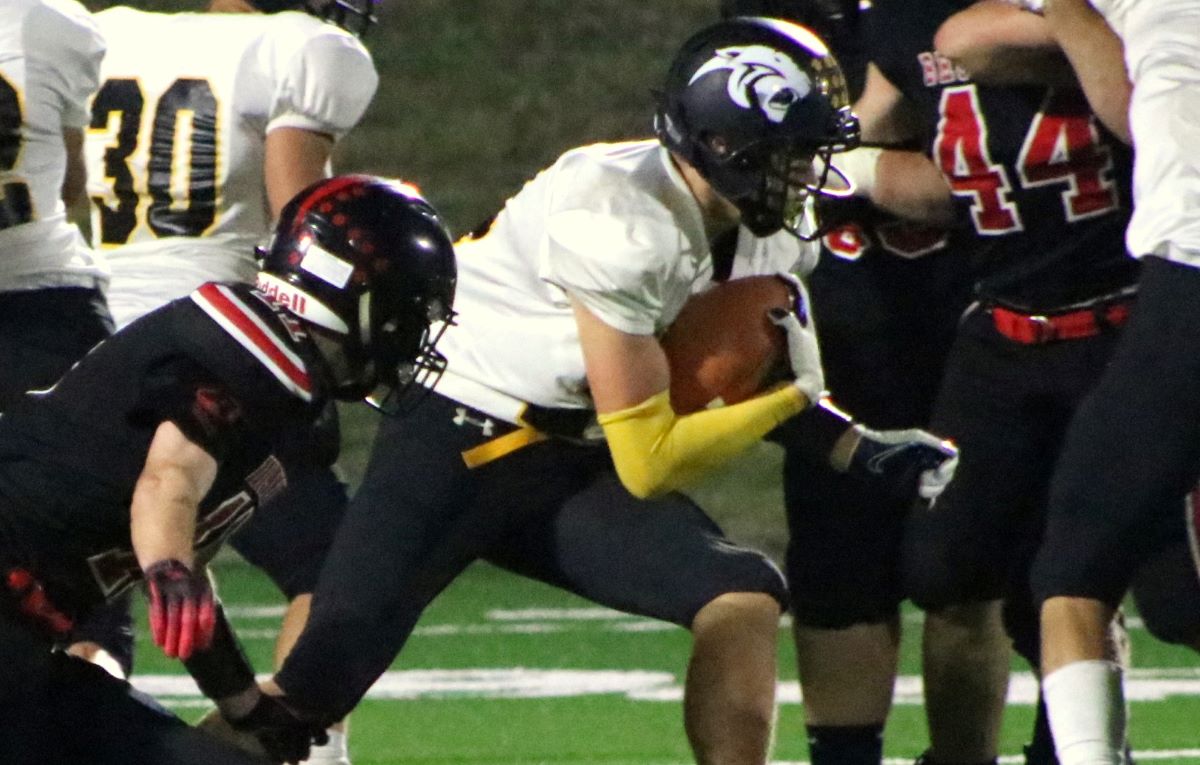 Weaver scored all four touchdowns and came away with a game-changing blocked punt in the fourth quarter to help Keystone rally for a 26-13 win at upset-minded Curwensville.

Weaver’s blocked punt early in the fourth quarter with the Panthers (3-1) trailing, 16-13, set up the senior’s third touchdown run of the game on a 2-yard run to give Keystone the lead for good, 20-16.

On the ensuing drive, Zander McHenry picked off Tide quarterback Dan McGarry Setting Weaver up for another 2-yard touchdown run to cap off a two-play 10-yard scoring drive to extend the lead to 26-16.

Weaver, who finished the night with 26 carries for 146 yards and four touchdowns, also scored the opening touchdown on a 15-yard run to make it 7-0.

Curwensville responded with a 14-play, 67-yard drive that resulted in a field goal try that was negated due to a running into the kicker penalty that gave the Tide a fresh set of downs.

McGarry then punched in a 3-yard run on a quarterback sneak to tie the game 7-7.

The Tide took a 10-7 lead early in the second quarter after Duane Brady blocked a punk to set up a 33-yard field goal from Jake Mullins.

Keystone responded with a 77-yard drive to retake the lead with Weaver’s second touchdown of the game on a 5-yard run to make it 13-6 that stuck through halftime.

The Panthers received the second-half kickoff and two plays in a Weaver fumble gave the Tide the ball at the Keystone 24.

McGarry then found Thad Butler for a quick catch and run that went 24 yards for a score and a 16-13 lead.

McGarry finished the night of 14 of 22 for 122 yards and a touchdown. Ty Terry was the leading receiver with six catches for 52 yards. Thad Butler combined for 70 yards with two carries for 30 yards and seven receptions for 40 yards.

Taylar Altman added 13 carries for 50 yards for Keystone, while Bret Wingard was 3 of 9 passing for 50 yards and two interceptions.

Weaver, who was also a force on defense with six tackles and a sack, added a catch for 20 yards. McHenry also had six tackles to go with his interception while also recovering a fumble and catching one pass for 15 yards. Gavin Hogue continued his strong play on defense with six stops, two sacks and a fumble forced, and Landon Hurrelbrink had a pair of sacks for Keystone as well.

That’s how you could look at St. Marys’ 34-7 dismantling of Ridgway ending the visiting Elkers 12-game win streak vs. District 9 opponents.

Christian Coudriet threw three scoring passes and James Davis ran for two, as St. Marys (3-0) scored the most points in a regular-season game against Ridgway (2-1) in four years.

Coudriet was 16-for-24 passing for 200 yards, the three scores and an interception, while Davis, who scored on runs of eight and five yards, ran 25 times for 168 yards and also picked off a pass on defense.

St. Marys led 14-7 before controlling the game in the second half.

Coudriet scoring passes went to Logan Mosier from five yards out, Michael Fitzgerald from 21 yards away and Mitchell Reiter from 15 yards out. Reiter grabbed six balls for 97 yards and Fitzgerald seven for 78.

CLARION, Pa. – Central Clarion County held off an upset bid from visiting DuBois picking up a 15-7 win over the visiting Beavers at Clarion University’s Memorial Stadium.

The Wildcats usually explosive scoring offense was held in check despite Central Clarion gaining 367 yards of offense and picking up 17 first downs while punting just once. A pair of turnovers and a dropped pass in the end zone helped keep the scoring lower.

By then, Clarion had taken a 6-0 halftime lead and expanded it to 15-0 thanks to a 23-yard Beau Verdill field goal and a 9-yard Cutter Boggess touchdown run, the later coming with 4:17 to play.

It was the second score of the game for Boggess, who also scored on a 40-yard pass from Cal German in the first quarter.

German, though, was uncharacteristically off going 10 of 22 passing for 183 yards, the touchdown and an interception. Boggess caught four passes for 59 yards and ran eight times for 74 yards while also hauling in one of three Wildcats interceptions – Ryan Hummel had the other two.

Zach Henery slashed his way through the Central Clarion run defense for 114 yards on 27 carries, while Hays was 11 of 24 for 92 yards, the touchdown and the three picks.

Central Clarion improved to 3-1 with the win. DuBois fell to 1-3.

WEST SUNBURY, Pa. – Scoring in five of its first six possessions, then adding a defensive touchdown, Brookville marched its way to a 47-14 win over Moniteau.

The Raiders amassed 482 yards of offense with quarterback Jack Krug throwing for 329 yards and six touchdowns, completing 18 of 22 passes with an interception. He threw two TDs apiece to Brayden Kunselman, Robert Keth and Kyle MacBeth.

Kunselman, who caught three passes for 129 yards, added a third TD on a 57-yard fumble recovery return while MacBeth caught five passes for 120 yards and ran for 81 yards on three carries.

The Raiders (4-0) led 27-6 at halftime as Krug connected with Kunselman on a 76-yarder just over a minute into the game, a 10-yarder with Keth and a pair of TD passes to MacBeth covering 70 and 10 yards. Another Keth 10-yard TD catch, and Kunselman’s fumble returned and a 20-yard TD were the second-half scores for the Raiders.

The Smethport junior quarterback accounted for 313 yards of total offense and had a hand in all seven of the Hubbers touchdowns in a 49-6 win over visiting Port Allegany.

Lent threw for four scores and ran for three others in the victory, which get Smethport perfect at 3-0.

He was 6 of 12 passing for 125 yards and four touchdowns, two to Ryli Burritt, and added a game-high 188 yards rushing and three scores on 16 carries.

Lent talked about the win.

Behind Lent, Smethport scored three times in a span of 4:18 seconds in the first quarter to open up a 21-0 lead after one quarter of play, and then the Hubbers scored two more times early in the second quarter to take a 35-0 lead into halftime meaning a running second-half clock under the PIAA Mercy Rule.

Burritt, who caught two passes for 95 yards and ran once for 12 yards, snagged a beautiful 30-yard scoring pass from Lent for the game’s first touchdown. Lent then ran in from 46 yards out to make it 14-0 before finding Burritt again, this time from 65 yards away, to make it 21-0.

In the second quarter, Lent threw a 14-yard scoring strike to Brandon Higley and then sprinted in from 62 yards out.

After halftime, Lent found Braedon Johnson on a 6-yard scoring pass and then finished the scoring for Smethport with a 9-yard run.

Port Allegany (0-3) got on the board late when backup quarterback Payton Spencer imitate Lent with a nice 29-yard scoring run.

Johnson added 88 yards on the ground on 17 carries, with most of the yards coming after halftime while catching two passes for eight yards and the score.

Spencer was 1-for-2 passing for 31 yards and ran once for 29 yards and the score. Gavin Burgess made a really nice catch on the Spencer completion, his lone catch of the night.

Blaine Moses had 12 tackles, including a pair of TFLs for the Port Allegany defense.

COUDERSPORT, Pa. – Hayden Keck ran for three touchdowns and passed for a fourth, and Coudersport put two runners over 100 yards and had a third with 99 in a 39-20 win over visiting Elk County Catholic.

Keck’s first touchdown, his scoring pass – 49 yards to Dalton Keglovits – and Ayers scoring run helped Coudersport take a 24-0 lead (there was also a safety involved) at the end of the first quarter.

Sam Kaul scored twice for ECC – once on the ground and once through the air – and ran 17 times for 168 yards and the touchdown while catching two passes for 16 yards and the score.

Mason McAllister threw the scoring pass and was 6 of 16 for 49 yards and the score while Nick Crisp ran 23 times for 86 yards including a 2-yard touchdown run.

WESTFIELD, Pa. – Conner Ford helped Brockway to its first win of the season, 32-14 at Cowanesque Valley.

Ford accounted for four touchdowns in the game throwing for 143 yards (11 of 16 passing) and two touchdowns and rushing 17 times for 101 yards and two more scores.

Tanner Morelli also had a strong game for Brockway with 67 yards rushing and 66 receiving while also scoring a touchdown.

Cowanesque Valley (0-4) got a touchdown catch and run from Elliot Good and a scoring grab from Tanyon Brown.

HYDE, Pa. – Olivar Billotte threw four touchdown passes, including three to Jake Lezzer, and Clearfield shook off a two-week layoff with a 42-6 win over visiting Philipsburg-Osceola.

Billotte, who threw just one pass after halftime, was 7-for-11 for 152 yards with scoring passes of eight, 42 and 42 yards to Lezzer, who caught four balls for 118 yards, all in the first quarter.

Nicholas Domico also caught a 14-yard scoring pass in the second quarter from Billotte, as the Bison (2-0) took a 35-0 halftime lead.

Mark McGonigal added a 1-yard scoring run in the third quarter to finish off the scoring fo Clearfield. He ran six times for 18 yards, while Jason Plubell had a team-best 56 yards on eight carries with the Bison using a running-back-by-committee approach. On defense, Josh Steele had an interception.

Philipsburg-Osceola’s lone score came against the second-team defense with Ryan Whitehead scrambling and finding Aaron Depto with a 5-yard scoring pass with 1:13 to play.

KANE, Pa. – Five different Kane players found the end zone, as the Wolves thrashed visiting Bradford, 51-7, for their first win of the season.

Josh Buhl (48 yards, 5 yards, 5 yards) scored three times on the ground for Kane (1-2), which led 44-0 at halftime, while Zuje Smith (1-yard run, 19-yard pass to Ricky Zampogna) ran for a touchdown and threw for a score. Harley Morris (12 yards) and Addison Plants (7 yards) also scored rushing touchdowns for the Wolves, who ran for 412 yards on the night.

Nolan Gonzalez scored on a 7-yard run for Bradford (0-3), while Elijah Finton ran for a team-best 62 yards.

Coon scored on runs of five and seven yards, Garing scored on a 2-yard run and 40-yard interception return and Rupp caught a 20-yard pass from Eric Booher and scored on a 53-yard run for the Gremlins (3-1), who also got a 7-yard scoring run from Zach Blair.

No additional stats were available.

DUKE CENTER, Pa. – The Cameron County at Otto-Eldred football game slated for Friday night in Duke Center was postponed after the Otto-Eldred School District became aware that “members” of the school community were recently exposed to a person who tested positive for COVID-19 off school grounds.

A letter from Otto-Eldred Superintendent Matt Splain said the district plans on resuming school and all school activities Monday.

There was no word on when the game may be made up or if it will be made up.