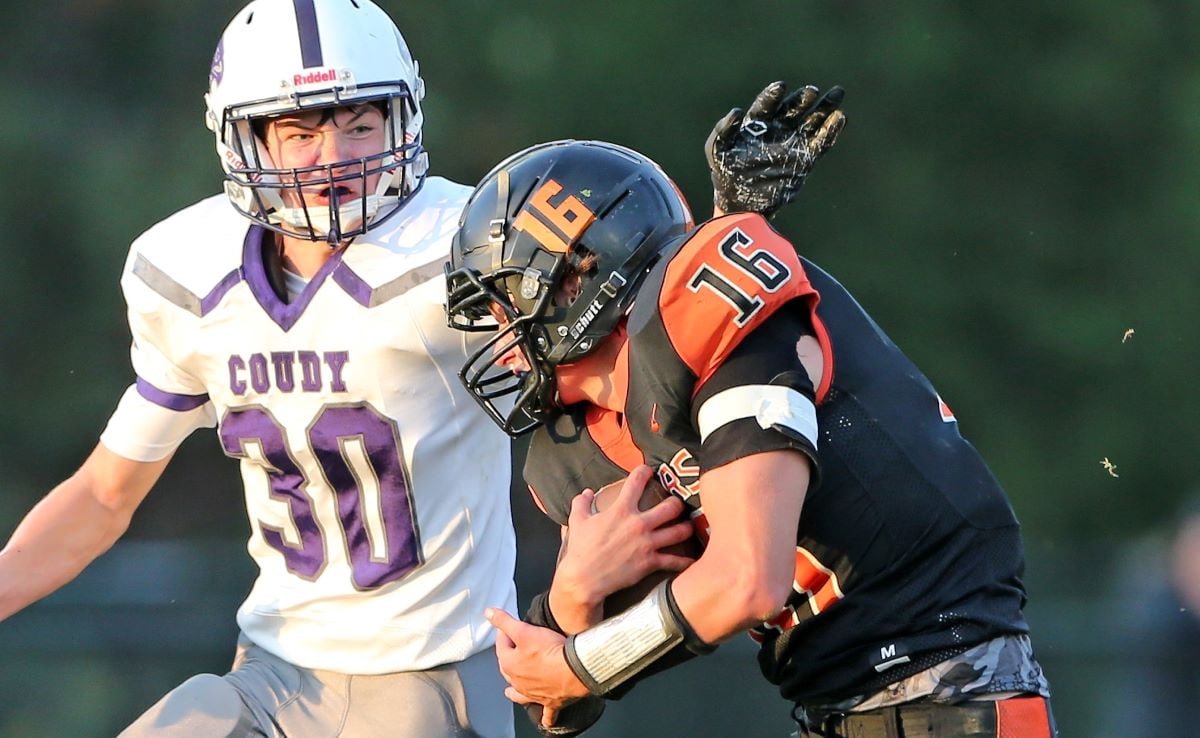 Four teams from District 9’s Region 2 will square off in the Class 1A semifinals Saturday afternoon. Both games kick off a 1 p.m.

Port Allegany won the Region 2 title, running the table with a 7-0 record that included wins over the other three semifinalists, including the Panthers (20-10) and Bulldogs (8-7) in close games and 40-7 over the Rovers.

Saturday’s winners advance to next week’s final, likely on Nov. 19 at a site and time to be announced. The District 9 champion meets the D10 champion in two weeks in the first round of the PIAA playoffs.

The D10 semifinals will also be played Saturday — top-seeded Eisenhower vs. Cambridge Springs at Warren at 7 p.m. and No. 2 seed Reynolds vs. Maplewood at Farrell starting at 1 p.m.

After grinding out an 8-7 win in their showdown at home against Redbank Valley in Week 8, the Gators went on the road and had to rally in the fourth quarter to beat the Panthers in Knox.

The Gators were down 10-8 midway through the fourth quarter before scoring twice after Keystone turnovers to grab the lead. Noah Archer scored both times on a pass from Drew Evens and 21-yard run with 2:43 left in the game.

Kyle Nellis scored the Panthers’ TD on a 37-yard run in the first quarter and Josh Beal kicked a 26-yard field goal in the second quarter.

Port Allegany outgained Keystone slightly in an even battle, 238-231. Evans completed 15 of 29 passes for 179 yards with his TD pass and an interception. Archer caught five passes for 94 yards. The Gators ran for just 67 yards with Archer going for 37 yards on six carries. Peyton Stiles had seven catches for 59 yards.

Of the Panthers’ four losses, three have been close ones with losses to Ridgway (26-20), Brockway (21-20) and Port Allegany. They also were beaten 42-7 by Redbank Valley.

Since taking over for the injured Rayce Weaver at quarterback, the sophomore Keth has completed 40 of 76 passes for 681 yards with nine TDs and six interceptions in seven starts. Albright (29-573, 9 TDs) and Drew Slaugenhaupt (11-301, 2 TDs) are the top receivers.

Sell (93), Elijah Will (75), Cole Henry (49) and Brock Champluvier (42) are the leading tacklers. Albright and Keth have intercepted seven and five passes respectively.

Their regular-season meeting was an entertaining matchup in New Bethlehem where the Bulldogs built a 34-14 lead by the third quarter, but had to hold off a Rovers rally that got them within six points late.

While the Bulldogs were off last week, the Rovers blasted Coudersport for a second time this season as quarterback Brayden Fox threw seven touchdowns, which made it 13 total against the Falcons as they beat them by a combined score of 132-22. Fox has thrown for 2,448 yards with 31 touchdowns and nine interceptions.

In their first meeting, Fox was 17-for-38 for 229 yards and four TDs against two interceptions. The Rovers’ 1,000-yard running back Jendy Cuello ran for 178 yards on 32 carries with Dylan Hanna catching four passes for 119 yards.

The Bulldogs have won two straight since their loss to Port Allegany and freshman quarterback Braylon Wagner makes his fourth start of the season. He’s completed 47 of 77 passes for 693 yards with eight TDs and three interceptions, almost all of that coming as the starter.

Wagner completed 17 of 24 passes for 221 yards and two TDs with two interceptions, almost all of that coming in an impressive first half in the first Rovers game. Rupp caught five passes for 106 yards while Ortz returned an interception 47 yards for a TD and also caught a TD pass.

Defensively, Bulldogs linebacker Caden Adams has 106 tackles in just nine games with a team-high 14 tackles for losses. Cole Bish (82), Brandon Ross (77), Ortz (49), and Carsen and Rylan Rupp (45 and 42) are at the top of the unit’s tackle leader list. Ross has 4 1/2 sacks with Carsen Rupp with four. Ortz has five interceptions to lead the unit.