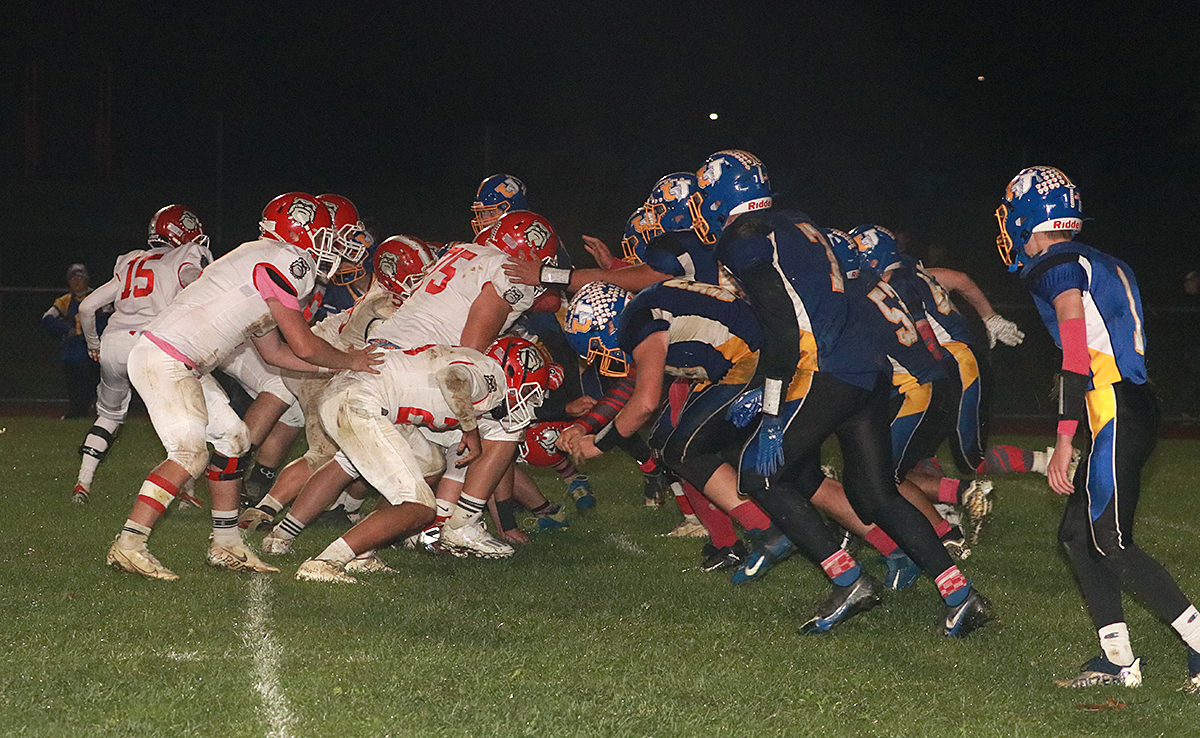 Where much will be determined Friday night ... at Clarion University's Memorial Stadium when Redbank Valley and Union/A-C Valley play for the District 9 Class 1A title. (Photo by Mike Maslar)

Defending champion Redbank Valley (10-1) meets Union/A-C Valley (9-2) for a 7 p.m. kickoff. The winner heads to the PIAA quarterfinals against the winner of the Reynolds/Northern Bedford game at a site and time to be announced.

After beating Smethport for their first D9 title since 1996, the Bulldogs played both of those teams last year, beating Northern Bedford (28-15) and losing to Reynolds (19-14) in a close game at Brockway.

To get a shot at either of those teams next week, the Bulldogs need to beat their rival Falcon Knights a second time. On a rainy night in Rimersburg on Oct. 22, the Bulldogs forced eight turnovers in a 28-6 win.

Neither team moved the ball much in that one as the Bulldogs took advantage of good field position and some non-offensive touchdowns with Ray Shreckengost’s fumble recovery in the end zone in the second quarter and Aiden Ortz’s 70-yard interception return.

Offensive yards were hard to come by on both sides of the ball with Redbank Valley outgaining Union/ACV, 149-133.

Even with the wet ball and rain affecting both teams’ offensive efficiency, it reflected what’s been going on all season with opposing offenses against both teams.

To note, the cumulative season numbers against the finalists:

There are others. While Terwint leads the Falcon Knights in tackles per game (6.5), Mikey Card (5.5), Landon Chalmers (5.3), Colton Murray (4.5), Andrew Verostek (4.2), Dawson Camper (3.9), Ryan Cooper (3.6) follow him on the leaderboard. Skyler Roxbury has eight interceptions with Cooper second with four pickoffs.

For the Bulldogs, Mansfield leads the team with 9.5 sacks and is third on the tackles per game list behind Zeldon Fisher (6.6) and Brenden Shreckengost (5.2). Brandon Ross has 5.5 sacks and is fourth on the unit at 4.2 stops per game. Ashton Kahle and Aiden Ortz have four and three interceptions respectively.

Both teams average similar yardage per game totals offensively, although the Bulldogs are more balanced with a strong debut season from senior quarterback Bryson Bain, who has thrown for 1,628 yards and 27 TDs, sharing the South Division’s Offensive MVP honor with Brockway quarterback Brayden Fox.

Ray Shreckengost leads the running game and was the workhorse last week in the win over Port Allegany with 200 yards on 29 carries. He’s rushed for 785 yards and 14 TDs this year.

The Falcon Knights are a bit more run-oriented with Mikey Card approaching 1,000 yards (926 on 119 carries, 7 TDs) while Dawson Camper has rushed for over 600 yards with a team-high 12 TDs. Quarterback Bailey Crissman has thrown for 965 yards and 13 TDs with 11 interceptions.

Both teams have found ways to the end zone other than through their offenses. The Bulldogs have scored 10 non-offensive TDs — Kahle has four punt returns — while the Falcon Knights have eight non-offensive scores.

Some odds and ends:

— Union/A-C Valley’s quarterfinal win over Cameron County was the co-operative program’s first playoff win and only the second overall if you consider both program’s individual history. A-C Valley won a Class 3A semifinal game in 1999 against Bradford before losing to Clearfield in the final. Union had never won a playoff game. It’s the sixth-year of the co-operative. The last three years, it lost playoff openers to Smethport twice and Redbank Valley, 32-6, in 2019 also at Clarion University.

— The Falcon Knights might be the only team to win two home playoff games in the same season, considering that D9 has historically used neutral fields in the semifinals and beyond.

Trio of District 10 Teams Embark on First Round of PIAA Football Playoffs Friday
D9 Class 2A final: Gremlins defend title in rematch with Elkers
We use cookies on our website to give you the most relevant experience by remembering your preferences and repeat visits. By clicking “Accept All”, you consent to the use of ALL the cookies. However, you may visit "Cookie Settings" to provide a controlled consent.
Cookie SettingsAccept All
Manage consent