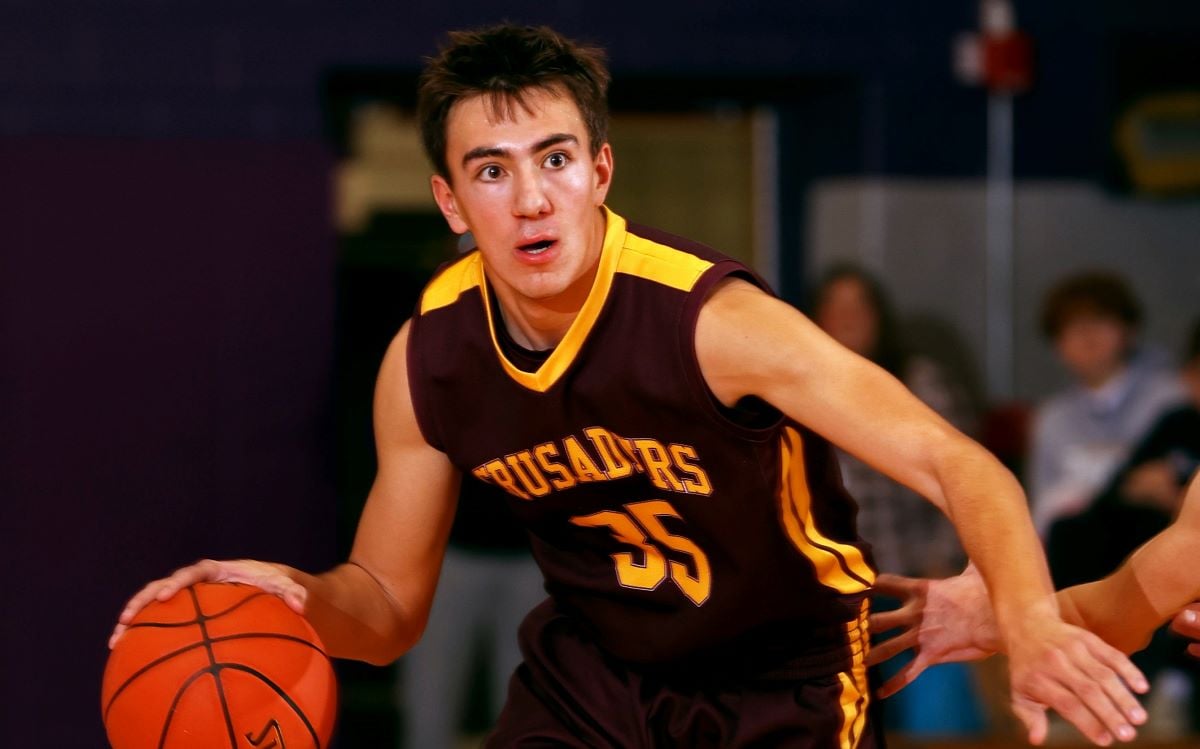 That helped the Raiders get back within three with just over 12 seconds left and led to wild final moments.

First, ECC inbounded the ball under its own hoop and got trapped along the sideline forcing it to call timeout with just over seven seconds to play.

On the subsequent inbounds, a long pass was tracked down at the far end of the court by a Crusader, who stepped out of bounds.

The clock should have read about 5.7 seconds left, but it kept running until it showed under four seconds to play.

Brookville players protested, and the officials elected to put about a ½ second back on the clock (officials in Pennsylvania don’t have the ability to use video replay like we were able to see how much time was left).

The Raiders were able to get the ball up court, but a wild final shot to tie the game was off the mark.

ECC started fast and led 13-8 at the end of the first quarter and 25-19 at halftime behind nine points from Michael Jacobs.

Adam Straub (5) and Jacobs (4) then combine for nine more points in the third quarter to push the Crusaders’ lead to eight going to the final frame.

Jacobs led all scorers with 17 points for ECC with Straub adding 11 and Jordan Wasko 10.

Pete also had 17 points for Brookville with Peterson adding 13 and Kellen Haines nine.

The Raiders played part of the game without star forward Clayton Cook, who suffered an ankle injury in the first half. Cook did return to the game after halftime and scored three of his five points in the fourth quarter.

KNOX, Pa. – Drew Keth hit a game-tying 3-pointer as time expired in regulation, and Keystone outscored visiting Cranberry 8-6 in overtime to get its first win of the season, 43-41, over the visiting Berries.

Down 35-32, Keystone inbounded the ball with 12 seconds to play and went the length of the court before Keth got two 3-pointers off with the second one going to tie the game.

His first shot, from the left side in front of his bench with 4.7 seconds left was a little short, but an alert Kyle Nellis tracked down the rebound and dished a pass to Keth in the left corner. Keth dribbled around Seth Schwab and launched another 3-pointer from just to the right of the left corner that found its mark as the horn sounded.

In overtime, Cranberry took a 37-35 lead eight seconds in on a basket by Devin Zerbe before Keth hit another 3-pointer, this time with 2:31 left in overtime, to put the Panthers up for good, 38-37.

Kyle Nellis then scored on a fast-break layup with 1:31 left to push the Keystone lead to 40-37.

After a Cranberry turnover, the Panthers had a chance to put the game away, but freshman Connor Morrow came away with a steal and a transition layup to make it 40-39 with just under a minute left.

After Aidan Sell and Morrow exchanged a pair of free throws each, Keth hit one of two charity shots with 7.4 left to make it a two-point game, and Cranberry’s Ashton Weaver missed a 35-foot at the horn that was off the mark.

Cranberry trailed by eight, 27-19, going to the fourth quarter but rallied behind seven points from Morrow to take the 35-32 lead.

Keth hit five 3-pointers in the game and led all scorers with 18 points with Nellis adding nine points and Sell seven for Keystone.

Dawson Hooftallen had 18 points and 15 rebounds to lead the Panthers.

SMETHPORT, Pa. – Jake Lobaugh and Isaiah Jackson combined to score 30 points to lead Johnsonburg to a 54-43 win at Smethport.

Andrew Zepeda and Aydan Jackson each added 12 points for the Warriors with David Dessicino adding 11 tallies.

Owen Close had a game-high 24 points for Redbank Valley, and Mason Clouse chipped in nine points.

KANE, Pa. – Tanner Fox led a trio of St. Marys players in double digits with 20 points, as the visiting Dutch rolled past Kane, 62-37.

Quin Gavozzi added 12 points in the victory with Anthony Nedinski chipping in 11. i

Sam Lundeen had 11 points for Kane with Ricky Zampogna adding 10.

Swisher had 26 points and 12 rebounds, his second straight double-double.

CLARION, Pa. – Clarion had no trouble at all with visiting Forest Area racing past the visiting Fire, 70-4.

Devon Lauer scored all 25 of his points before halftime in helping the Bobcats to a 49-4 lead at the break. Lauer added seven steals.

Gabe Simko scored eight of his 12 points in the third quarter for Clarion, while Derek Smail chipped in eight points and Logan MacKinley seven.

HOLLIDAYSBURG, Pa. – Justin Whysong and Nate Whysong combined to score 43 points to lift Chestnut Ridge to a 72-62 win over DuBois in the Hollidaysburg Roundball Classic.

Tyler Kennis had 19 points for DuBois followed by Cam Thompson with 16, Drew Gudalis with 15, and Maddox Bennet with 12 on four 3-pointers.