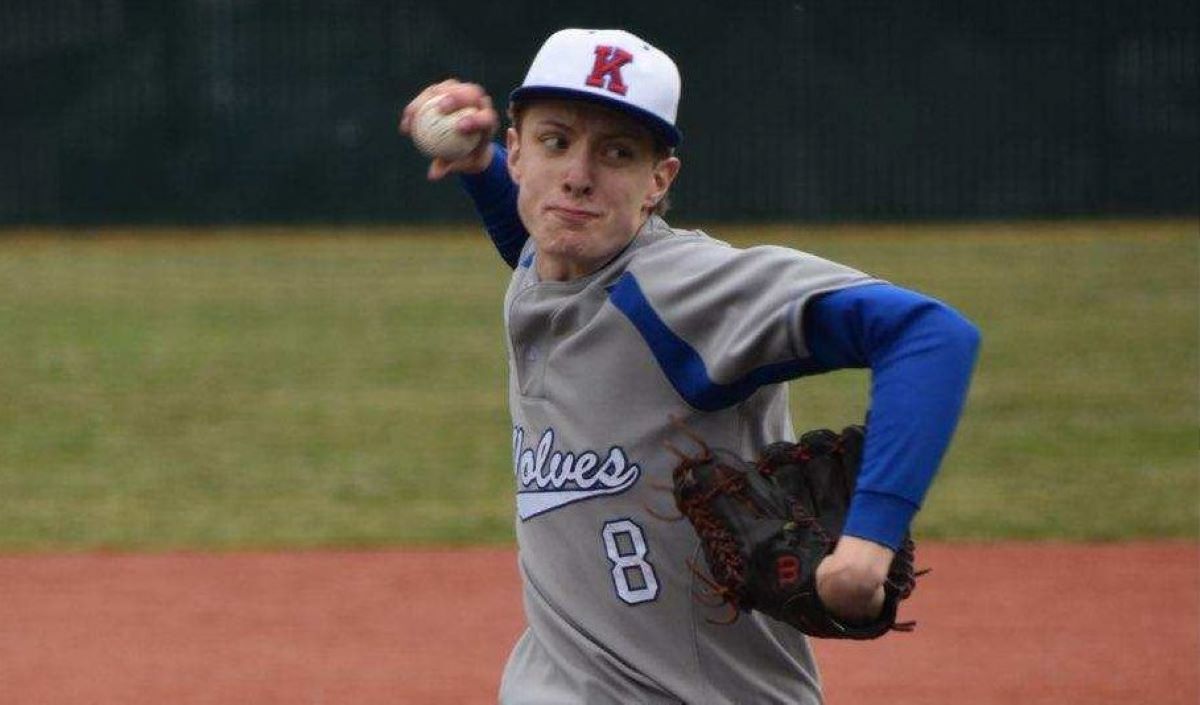 Carson Whiteman threw his second no-hitter of the season in Kane's 1-0 win over Smethport Friday. Photo by Victoria Hallberg

MT. JEWETT, Pa. – Kane’s Carson Whiteman came one strike from a perfect game before settling for his second no-hitter of the season, as the Wolves edged visiting Smethport, 1-0.

Whiteman walked mound opponent Alex Ognen on a 3-2 pitch with no outs in the seventh inning or he would have had the perfect game.

Whiteman, who also no-hit Brockway in five innings March 30, was also involved in Kane’s score when he reached on a bases-loaded error in the third that scored

Kane’s Carson Whiteman tossed his second no-hitter of the season while striking out 17 and walking just one to win a pitcher’s duel with Smethport’s Alex Ognen, 1-0, at Kane’s home field.

BRADFORD, Pa. – Brett Skaggs and Cameron Austin each drove in three runs to lead Bradford to a 10-4 win over visiting Elk County Catholic.

Skaggs was 2-for-3 with a walk and two runs scored while Austin was 2-for-4 with a run scored.

Levi Reed added a pair of RBIs for the Owls while going 1-for-1, while Austen Davis was 2-for-2 with a walk and three runs scored and Nolan Roulo walked twice, scored twice, and drove in a run.

A six-run fifth inning helped Bradford erase a 3-1 deficit on its way to the win.

Joseph Tettis was 1-for-4 with a double and two RBIs for ECC.

Mike Greenberg pitched a scoreless seventh for Bradford allowing a walk and striking out one.

HYDE, Pa. – A rare tie occurred between Clearfield and Indiana after the visiting Indians scored a run in the top of the seventh before the Bison failed to score in the bottom of the inning and darkness forced the game to be called with the contest knotted at five.

Clearfield led 5-4 going to the seventh with darkness creeping in, but Indiana tied the game with some two-out lightning.

Down to its final out, the Indians Branden Yanity and Ben Ryan worked walks off of Clearfield’s Karson Rumsky.

With runners at the corners, Rumsky bore down and struck out Tyler Gonos to keep the game tied.

Clearfield got a leadoff single from Blake Pretash, but a strikeout, a fielder’s choice, and a strikeout ended the game in a tie.

The Bison led 5-2 after a three-run bottom of the third before Indiana got back within a run with two in the top of the fifth.

St. Peter was 3-for-3 with two runs scored and three RBIs for the Indians.

Cayden Black paced Oswayo Valley going 3-for-3 with an RBI and a run scored.

Ben Cooper, who was also 3-for-5 with a run scored and an RBI, got the win, while Nik Bonney took the loss.

ST. MARYS, Pa. – Gabby Weisner went 3-for-4 with a pair of doubles, two runs scored, and four RBIs to spearhead a 15-5, five-inning win for Elk County Catholic over visiting Bradford.

Lydia Anderson was also 3-for-4 with an RBI and three runs scored for the Lady Crusaders with Emily Mourer going 3-for-3 with a double, two runs scored, and three RBIs, and Lucy Klawuhn contributing a 2-for-3 day with a walk and two runs scored.

Adrienne Angel was 2-for-2 with a run scored for Bradford with Lea Kakelewski going 1-for-2 with a double and an RBI.

Bradford grabbed a 4-0 lead in the top of the first before ECC answered with seven in the bottom of the inning and eventually built the lead to 11-4 after three.

Kirst got the win in relief of Weisner going 4 ⅔ innings allowing on earned run on six hits while striking out one.

Weisner had control problems walking four of the five batters she faced while throwing three wild pitches in a ⅓ of an inning. She was charged with four runs, three earned.

Autumn Outman pitched two innings allowing two earned runs on three hits and a walk while striking out one.

Macy West took the loss giving up nine runs, four earned, on eight hits and five walks while striking out one in 1 ⅔ innings of work.

Maya Smith gave up one hit and two walks while striking out four to get the win.