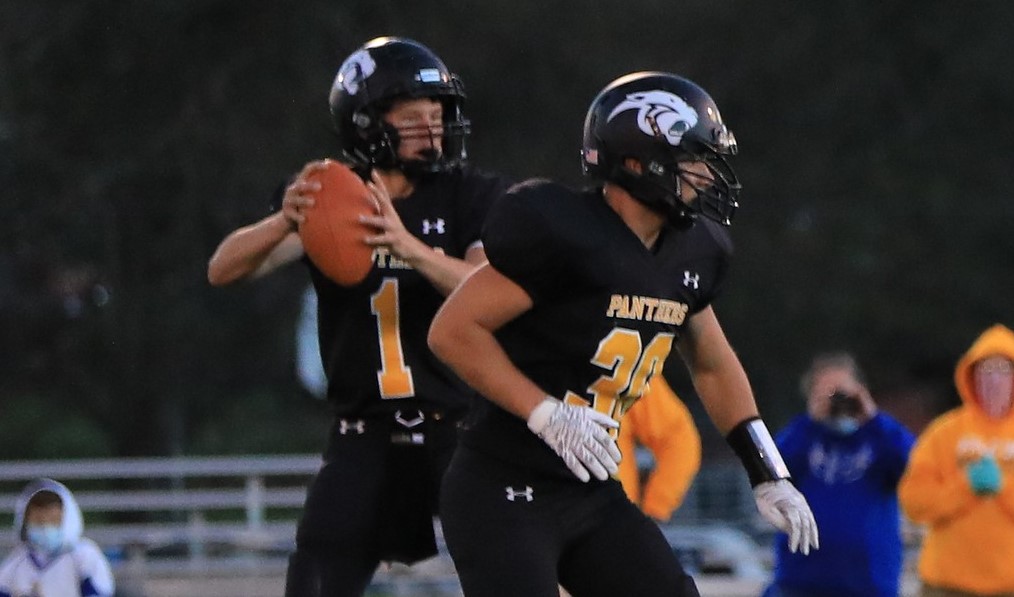 KNOX, Pa. – Bret Wingard threw a pair of touchdown passes, and Keystone didn’t allow a month between games to affect in a 26-13 season-ending win over visiting Curwensville.

Keystone hadn’t played since losing to Redbank Valley Oct. 9 missing two weeks because of COVID-19 and then a third week because Brockway ended its season and canceled last week’s game.

Wingard was 5 of 11 passing for 120 yards, the two scores and an interception and added 10 carries for 68 yards. He threw a 6-yard touchdown pass to Keenan Heeter in the first quarter and then hit Logan Sell in stride with a 75-yard bomb early in the fourth quarter to put the Panthers ahead 26-7.

Taylar Altman added a 3-yard scoring run for the Panthers (4-2) who also got a 1-yard scoring dive from Gavin Hogue.

Altman ran 24 times for a team-best 72 yards and the score, while Zander McHenry had 10 tackles and an interception on defense.

Thad Butler scored on an 80-yard touchdown run for Curwensville that gave the Golden Tide (1-6) an early 7-6 lead, and Ty Terry finished the scoring with a 38-yard touchdown catch from Dan McGarry.

FAIRVIEW, Pa. – Landon Weis ran for 184 yards and four touchdowns as Corry rolled past Fairview 55-7 in the season finale for both teams.

The Beavers jumped out 27-7 after the first quarter and had the ‘Mercy Rule’ in effect by halftime, leading 48-7.

Corry quarterback Nathan Lesher matched Weis’ performance, throwing for 205 yards and three touchdowns, all of which went to Sam Fisher, who finished with 176 yards receiving.

Weis capped his night with a 2-yard touchdown run early in the third quarter.

The Dragons, who finished with a record of 5-3, outscored the Blue Devils 20-0 in the second half after trailing 28-14 at halftime.

Douvlos threw for three touchdowns and ran for another. His 46-yard touchdown pass to Alex Borger got the Dragons within 28-20, and his 4-yard scoring run late in the third quarter, coupled with his 2-point conversion pass to Borger tied the game.

James Swanson got the Dragons on the board just a minute into the game with an 80-yard touchdown run.

Chris Roth and Ty Eilman responded with touchdown runs in the first quarter to give Sharpsville (3-5) a 13-7 lead.

Douvlos’ 18-yard scoring strike to Donovan Fiscus gave Warren a 14-13 lead.
Roth scored on a 30-yard run and Eilman a 2-yarder with four minutes to go before halftime to give the Blue Devils a 28-14 lead.

Sebastian was 12 of 17 passing for 151 yards and the two scores while rushing eight times for 72 yards and two touchdowns to help the Terrors (4-3) finish the season on a three-game winning streak.

Both of Sebastian’s touchdown passes went to Jake Merry who caught four balls for 83 yards.

T.J. VanScoter added a touchdown run for Otto-Eldred and carried 10 times for 80 yards, and Jake Rhinehart had a pick-six for the Terrors, one of two interceptions on the night for Rhinehart.

Cameron County actually led 12-0 thanks to a Dylan Baney 2-yard run and a Connor Nolan pick-six of an Ethan Smith pass attempt.

Baney later in the game threw a 15-yard touchdown pass to Nolan.

Baney finished the game 9 of 18 passing for 88 yards, the touchdown and three picks while five yards and the score.

Jameson Britton paced the Red Raiders (0-7) on the ground with 73 yards on 17 carries while Dylan Rieder had three grabs for 42 yards.