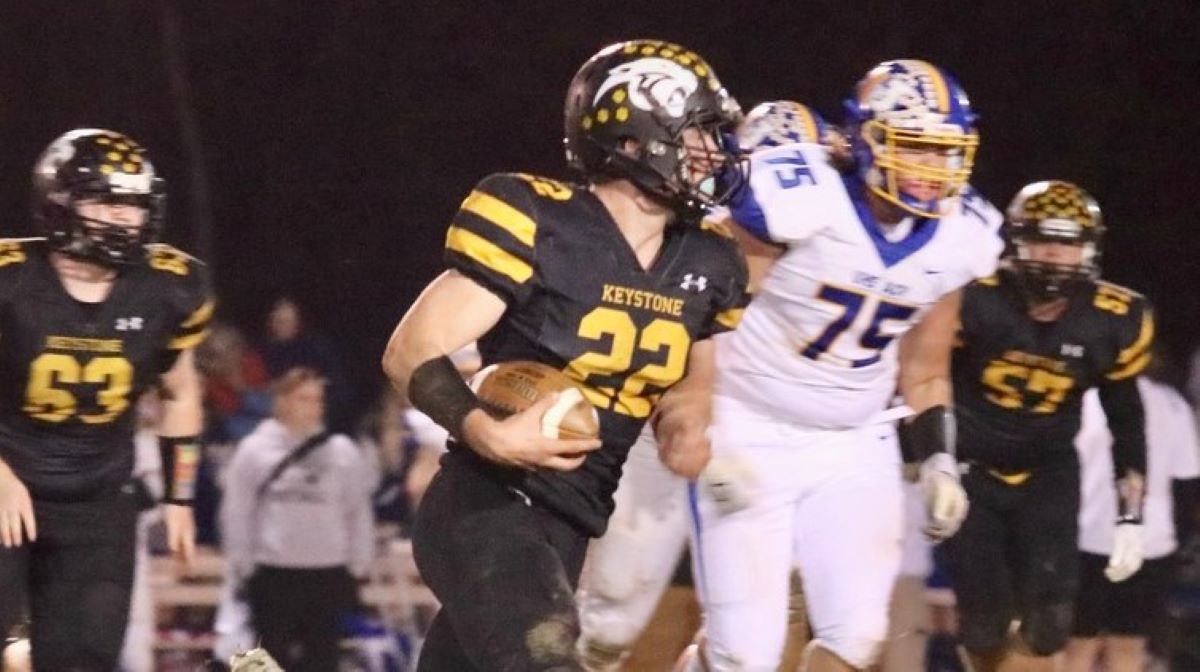 KNOX, Pa. – Keystone used two big scoring plays in the opening seconds of the first two quarters to secure its first postseason win since 1989 with a 35-15 victory over Union/A-C Valley in the District 9 Class 1A quarterfinals Friday night at Keystone High School.

“It’s been a while at Keystone since they have won a playoff game,” Panthers’ first-year head coach Todd Smith said. “I think the kids are just excited.”

The victory is the first since Keystone beat Clairton, 15-14, in the 1989 PIAA Class 1A semifinals. That actually marked the third straight playoff win for the Panthers who also beat Smethport, 14-7, in the 1989 D9 2A title game (yes the Panthers won the 2A D9 title but played in the 1A PIAA playoffs), and toppled Coudersport, 18-14, in the 1988 D9 2A championship game but did not receive a bid to the PIAA playoffs.

Since then, it had been nine straight losses in D9 postseason action for Keystone, including a 14-12 loss to Port Allegany in last year’s quarterfinals at home.

But Friday night was a different story.

Kyle Nellis broke free for a 67-yard touchdown run down the sideline just 13 seconds into the game to give the Panthers a 7-0 lead.

“It’s not a secret, we want to run the football,” Smith said. “That play really set the tone.”

Keystone (7-4), the fourth seed,  made it 14-0 on a 16-yard Aidan Sell scoring run with 4:05 to play in the quarter before Union/A-C Valley made it a one-score game on a 30-yard Brody Dittman to Ryan Cooper touchdown pass with 1:38 to play in the opening stanza.

That’s when Keystone used its second big play to restore the two-touchdown advantage.

This time it was a 50-yard Drew Keth to Drew Slaugenhaupt touchdown pass just nine seconds into the second quarter that pushed the lead to 21-7.

“We were able to play action, and their safety ran up,” Smith said. “We were able to hit Drew Slaugnhaupt over the middle of the field. He can run. That was a big play for us.”

By halftime, Keystone led 28-7 thanks to a 4-yard Keth to Sell scoring pass midway through the second quarter.

Sell, Nellis, and Tyler Albright once again did most of the heavy lifting for the Panthers.

“We feel like we have three guys who are really hard to stop,” Smith said. “We were able to spread the ball around.”

Dittman had a mixed-bag night for Union/A-C Valley going 11 of 23 passing for 169 yards and the touchdown but also throwing three interceptions. Owen Bish was 4 of 7 passing for 63 yards, a touchdown, and an interception.

Cooper had a monster night for the fifth-seeded Falcon Knights (5-6) with seven catches for 158 yards and two touchdowns while also intercepting a pass on defense.

“Union/A-C Valley has a lot of good football players on their team,” Smith said. “They have some athletes. It’s a good football team. We knew we had to play a full game.”

It was the second win of the year for the Panthers over the Falcon Knights, as they also beat Union/A-C Valley, 43-7, Sept. 2 in Rimersburg.

Now, Keystone hopes it can avoid being beaten twice in one year by the same team. The Panthers will face top-seeded Port Allegany in the semifinals at a day, site, and time to be announced. Port had a bye into the semifinals.

Keystone dropped a 20-10 decision to the Gators Oct. 21 at home in a game the Panthers led with just over six minutes to play, 10-8.

“We are excited,” Smith said. “We know Port is a good team. We played them tough the first time. Our kids are excited to get another chance.”

BROCKWAY, Pa. – It was over before it started … almost.

Brockway scored three touchdowns in the first 4:47 of the game on its way to a 62-6 win over visiting Coudersport in the District 9 Class 1A quarterfinals at Varischetti Field.

“This means a lot to our team,” sophomore quarterback Brayden Fox, who had a monster night going 15 of 19 passing for 342 yards, seven touchdowns, and one interception, said. “It has been a while since we have had a playoff win. It is really a momentum boast going into next week.”

To say the third-seeded Rovers (7-4) scored early and often wouldn’t do it justice.

Touchdowns by Jendy Cuello (23-yard run), Mattie Brubaker (59-yard pass from Fox), and Alex Carlson (40-yard interception return) put Brockway ahead 21-0 with 7:13 left in the first quarter, and the Rovers had the lead at 35-7 at the end of the quarter.

The start was eerily similar to the first time the teams met in Coudersport Sept. 9, with Brockway winning that one 70-16.

“Obviously have gotten a lot better since the first time we played them,’ Fox said. “But our game plan was just to go in and keep being ourselves.”

Mattie Brubaker had a pair of scores in the first quarter, also hauling in a 7-yard scoring pass from Fox. He finished the game with three catches for 92 yards.

“Mattie is a great route-runner,” Fox said. “All of our receivers are great.”

Dylan Hanna had a big night catching the ball as well with four grabs for 88 yards and three touchdowns, and Alex Carlson added four grabs for 127 yards and two scores. Carlson’s catches included an 84-yard flip pass that he did most of the work on for the game’s final score early in the third quarter.

“He is going to hate me for saying this, but he is not the fastest guy on our team,” Fox said laughing. “He knows it too. But that was great. I am not going to lie, I thought (he was going to get caught around the Coudersport’s 40-yard line).”

But that was the lone real bright spot in the opening half for the sixth-seeded Falcons (6-4), who were outgained 406 yards to 46 while picking up just two first downs to 20 for the Rovers.

The most amazing stat of the opening half had to be Brockway not even attempting a third-down play on any of its 37 offensive plays in the half.

For the game, Brockway had 512 yards and 23 first downs while running just two third-down plays the entire night.

The Rovers now get a rematch with Redbank Valley in the District 9 Class 1A semifinals at a site, day, and time to be announced.

Brockway dropped a 34-28 decision to the two-time defending champion Bulldogs Oct. 21 in New Bethlehem. Redbank, the second seed, had a bye into the semifinals.

“Redbank is really good,” Fox said. “We are going to have prepare this week a lot for them. We just need to be ourselves and play our game.”

Epic Game-Winning Drive Lifts St. Marys to D9 3A Title Game; Brookville Goes from 0-4 to Playing in D9 2A Title Contest
2022 D9 Football Brackets Updated for 1A Semifinals; 2A, 3A Finals
This website or its third-party tools process personal data.In case of sale of your personal information, you may opt out by using the link Do not sell my personal information.
×
Manage consent