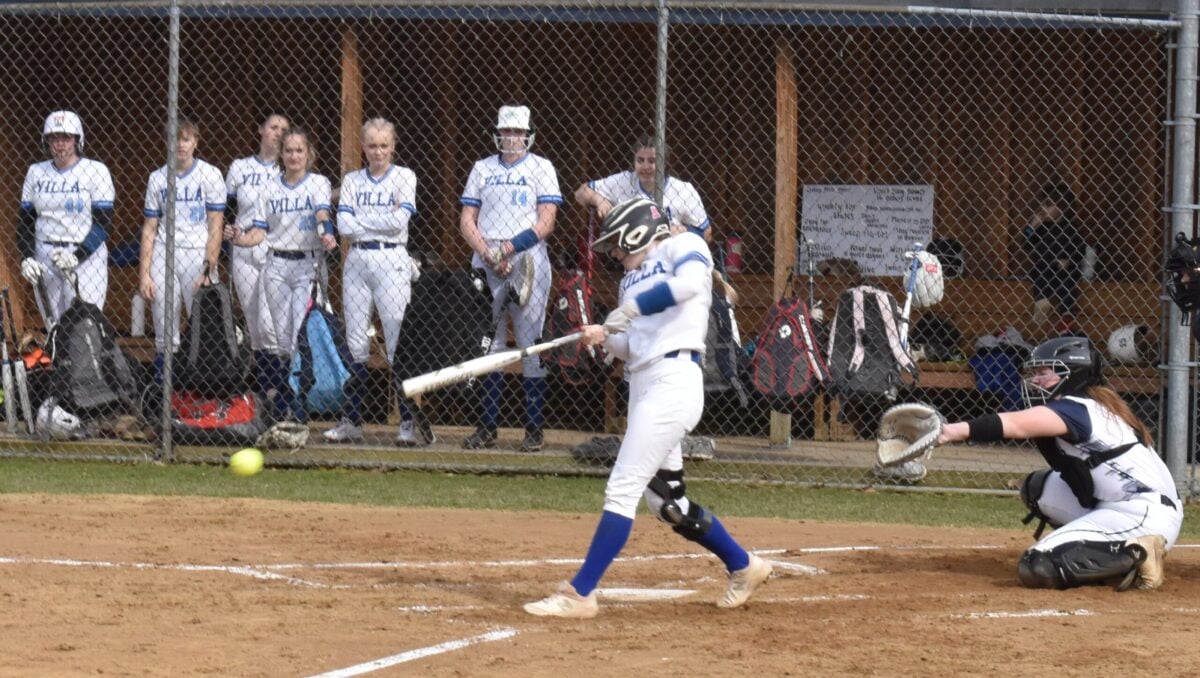 MEADVILLE, Pa. – A pitcher’s duel for 5 ½ innings turned into an 8-run rout as Franklin erupted for nine runs in the sixth inning on its way to a 10-2 win over Conneaut in the District 10 Class 4A semifinals.

The Eagles had just taken a 2-1 lead in the top of the inning, but the Knights racked up seven hits and two walks in the home half for the game’s final margin. The win puts Franklin back in the D10 championship a year after winning the program’s first D10 title.

Trinity Edge’s solo home run in the fourth was the lone run of the game through five innings. Up to that point, the Knights and Eagles had only had a combined six baserunners.

Kaley Cook hit a one-out RBI double in the Conneaut sixth to tie the game at 1-1. Brooke Wise’s single later in the inning had the fourth-seeded Eagles thinking upset with a 2-1 lead over the No. 1 seed Knights.

Autumn Fitzgerald led off the bottom of the inning with a double and moved to third on a dropped third strike. Gabby Laderer’s bunt brought in Fitzgerald to tie it at 2-2. Rilee Hanna’s RBI single put Franklin back on top, 3-2.

One out later, Brandy Atwell hit a 2-run single to push the lead to 5-2. The next two batters walked to bring Fitzgerald back to the plate, she delivered a 2-run single to make it 7-2. Sydni Hoobler followed with a double that brought in two more runs, and Laderer singled in Hoobler for the final run of the game.

In the circle, Edge allowed two earned runs on five hits with two walks and six strikeouts to get the win.

Cook had two of Conneaut’s five hits in the game. She scored a run and drove in one.

Franklin will face Villa for the D10 title on Monday at a site/time to be announced.

ERIE, Pa. – With one swing of the bat, Haley Dever lifted Villa Maria into the District 10 Class 4A championship game.

Dever’s RBI groundout brought in Madison Giambrone, who pinch-ran for Addiyson Biel, who led off the inning with a double. Giambrone went to third on a passed ball in Dever’s at-bat.

It was a game in which Villa led 2-0, with GM coming back to tie the game in the fifth.

Annabella Cipalla went 2-for-3 with a double for Villa, while Emily Dudenhoeffer had an RBI.

Jenna Wagner got the win for Villa, allowing just four hits in the complete-game effort, striking out five without issuing a walk. Both of her runs allowed were unearned.

ERIE – Harbor Creek scored eight runs in the first three innings, then had to hold off a late rally to defeat Sharon, 8-6, and advance to the District 10 Class 3A championship.

The top-seeded Huskies looked to be in complete control after a 5-run third gave them an 8-0 lead. The fifth-seeded Tigers shut out the Huskies the rest of the way, then scored three runs in each of the sixth and seventh innings to close the gap.

Reagan Rand and Rylee Vogt got Harbor Creek on the board with consecutive RBI singles in the first. The Huskies tacked on another run in the second to go up 3-0.

With a run already in, two outs, and the bases loaded in the third Madison Mikotowicz hit a bases-clearing double to push the Huskies’ lead to 7-0. Maura Benim singled in another run two batters later to put Harbor Creek ahead, 8-0.

The Tigers staged a two-out rally of their own in the sixth.

Ella Connelly drew a leadoff walk to start the inning, then came home on Dalaini Bayer’s two-out single. A single and a walk loaded the bases for Kurtasia Chester. Chester singled on a liner to left which brought in two runs and cut the lead to 8-3.

Sharon struck again with two outs in the seventh. After the first two batters of the inning reached via a single and a walk, the next two batters popped out and flew out. Claire Bodien stepped in with two outs and took the first pitch she saw to center for a 2-run double. Bodien came in on Ella Brown’s single to right to make it a two-run game.

Alayna Mosbacher was able to strike out Katie Lapikas on three straight pitches to end the game.

Maggie Konieczki led the Huskies with three hits and scored twice. Rand, Vogt, and Baileigh Bleil each had two hits and an RBI.

Bodien, Bayer, and Brown each had two hits for the Tigers. Bodien had two RBIs, while Bayer and Brown had one each.

The Huskies will face Corry for the D10 Class 3A title at a time/location to be announced.

MEADVILLE, Pa. – Haylee Dyne hit a two-run home run in the first inning and Corry never looked back in an 8-3 semifinal win over Jamestown.

The Beavers will meet Harbor Creek for the title on Monday.

May 26, 2022 D9/D10 Baseball/Softball Playoff Scores Powered by North Washington Rodeo
McCracken, Franklin Walk-Off Against Hickory; Fairview Also Advances in 3A; Sharpsville, Middlesex to Meet for 2A Title Powered by North Washington Rodeo
This website or its third-party tools process personal data.In case of sale of your personal information, you may opt out by using the link Do not sell my personal information.
×
Manage consent