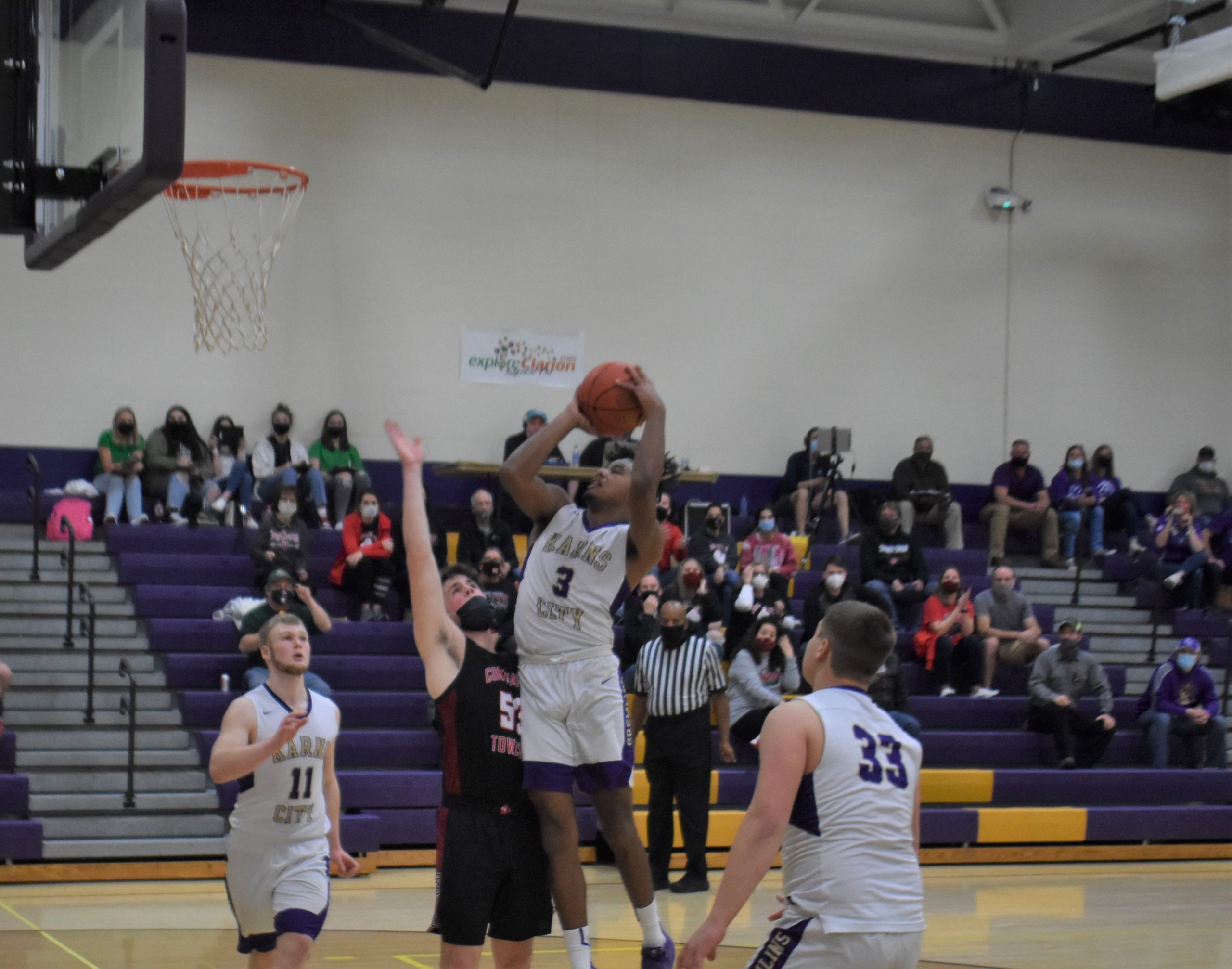 Karns City's Micah Rupp goes up for two of his 10 points.

Karns City needed a few minutes to find its legs in its PIAA Class 2A first-round game against Conemaugh Township on Wednesday.

Once they did, it was a thing of beauty, as the District 9 champion Gremlins rolled to a 72-46 win over the Indians, advancing to play Our Lady of Sacred Heart in the quarterfinals on Saturday.

“I think tonight, it wasn’t really anything to do with the game plan, because we actually started kind of slow,” said Karns City coach Chris Bellis. “We’d like to get off to a little quicker start. I think both teams actually struggled a little bit. The PIAA gave us a new basketball to use tonight and I felt like nobody could catch it. I don’t know if that was a factor or not.”

The Karns City student section brought the energy in the Gremlins’ win over Conemaugh Township.

In fact, it took the Gremlins (23-2) five minutes to score, courtesy of a Chase Beighley jumper. The good news was, the slow start didn’t hurt them, as that shot tied the game 2-2.

They were off and running after that, however, thanks in large part to freshman Luke Cramer, who scored six of the team’s next 10 points.

“It means everything,” Cramer said of the start. “I think it’s a completely different game if we don’t come out with the intensity and get them back on their heels.”

Eric Booher came off the bench and knocked down a 3, while Micah Rupp, Nathan Waltman and Beighley all got in on the scoring act, as the Gremlins went on a 22-8 run to close the half, taking a 19-point lead, 33-14.

As the offense got going, the defense was dominant, holding Conemaugh Township’s leading scorer, Tyler Poznanski, in check.

“I think that one of my team’s key strengths is they are able to get their hands on and tip balls on defense,” Bellis said. “We ran a couple of defenses to play to those strengths. We trapped a little bit and they were able to get some hands on things, but I think my kids probably got a piece of the most basketballs when we were in man-to-man.”

Rupp was all over the glass, finishing with a double-double of 10 points and 10 rebounds, while blocking and altering a number of shots.

While Rupp and company were shutting down the District 5 champion Indians (14-6), Beighley caught fire in the third quarter.

The Gremlins’ all-time leading scorer knocked down three 3s in the span of 1:20, part of a game-high 26 point effort.

“It’s amazing,” Cramer said. “The energy on the court when he hits all those 3s is crazy. It’s just fun to be around.”

Jackson Byer led the Indians with 20 points while Poznanski, who came in averaging 21.6 ppg., had 12.

“I thought Micah (Rupp) did a good job on him,” Bellis said. “And Luke Garing a little bit too. Micah’s able to block shots and not only that, he has the ability to alter shots.”

The Gremlins date with OLSH will be a true away game, with the time on Saturday to be determined.

And, while this is rarefied air for the Gremlins, they are embracing the challenge as one of the final eight Class 2A teams in Pennsylvania.

“We’re just ready to work hard and get this,” Cramer said. “We haven’t been in this position in a while. The energy is up and we’re ready for it.”