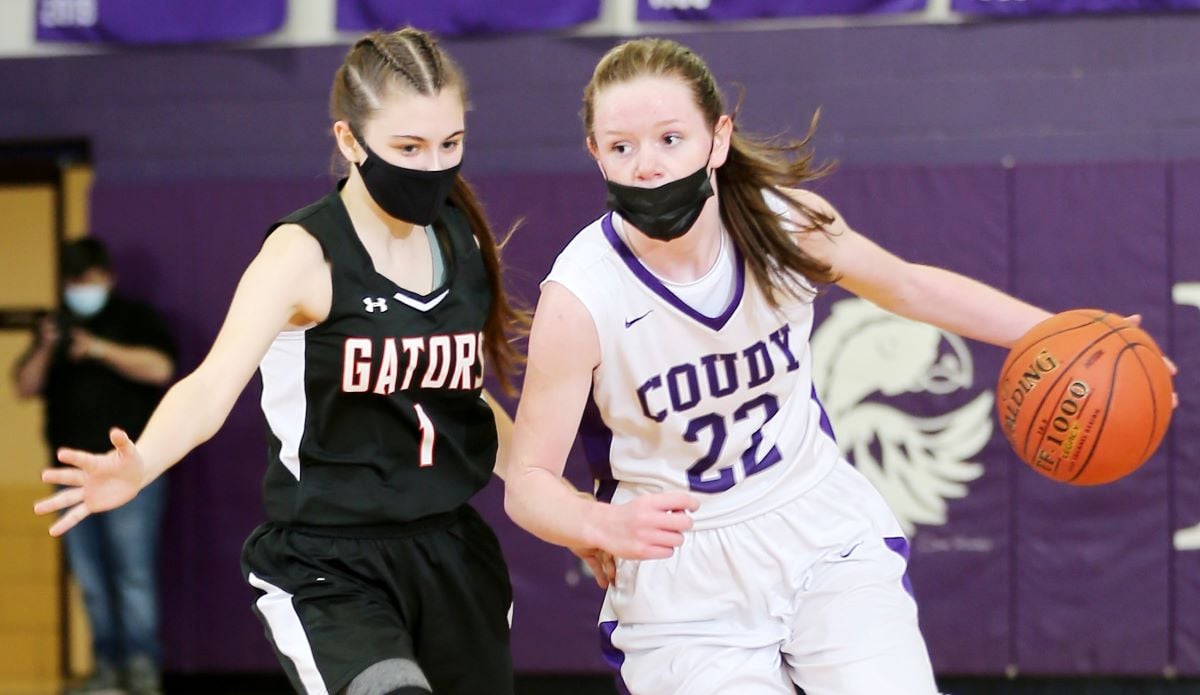 Sarah Chambers of Coudersport (No. 22) drives past Port Allegany's Gracie Archer Saturday. Chambers scored a game-high 20 points to lead the defending champion Lady Falcons back to the D9 1A title game. Photo by Paul Burdick. Check out more of Burdick's work here

COUDERSPORT, Pa. – Top-seeded and defending champion Coudersport rolled into the District 9 Class 1A girls’ title game with a 42-27 win over visiting and fourth-seeded Port Allegany.

The Lady Falcons wasted little time showing who the better team was, scoring 19 first-quarter points thanks 10 from Sarah Chambers and five from Emma Chambers to take a 10-point, 19-9, lead at the end of the quarter.

Sarah Chambers and Ros Page then each scored four points in the second quarter to help Coudersport expand the advantage to 13, 29-16, by halftime.

It was a game-high 20 points from Sarah Chambers that led the Lady Falcons with Page adding 11 tallies.

Bree Garzel, District 9’s leading scorer, was limited to 10 points but did have a double-double with 13 rebounds for Port Allegany. Evin Stauffer added eight points and four steals.

Coudersport will host No. 2 seed Otto-Eldred in the championship game Tuesday, March 15.

“It was a fantastic all-around team effort against a great team,” Otto-Eldred head coach Shawn Gray said. “That team is going to give D9 nightmares in the coming years.”

Otto-Eldred started strong and led 13-5 after the first quarter thanks to eight points from Katie Sheeler.

But ECC, with three freshmen playing key roles, got second-quarter 3-pointers from Julia Aikens and Lucy Klawuhn, one of those youngsters, to get within two, 15-13, at halftime.

Sydney Alexander, another of the freshmen, then tied the game at 15 early in the third quarter.

An offensive putback by Alexander 38 seconds later got ECC back within one, 20-19, but the Lady Terrors scored the next four points and never allowed the Lady Crusaders to get closer than the two points at the end of the third quarter.

“Emmalee Sheeler played fantastic defense all game,” Gray said. “Morgan Dalton also hit all three of her shots and really sparked us with her play. Emmalee and Morgan are terrific leaders on this team, and I can’t say enough about them as people.”

Dalton added seven points and was the second-leading scorer for Otto-Eldred, while Katie Sheeler chipped in four rebounds to go with her 16 points. Kayley Heller had seven rebounds for the Lady Terrors, and Reilly Raught added four boards.

“Our hats off to Coach Pistner and his girls,” Gray said. “They played incredibly hard. It stinks that they don’t get to move on to the state tournament this year because they certainly deserve to.”

Otto-Eldred will travel to Coudersport for the championship game Tuesday, March 15. The Lady Terrors, who lost in the 2017 D9 1A title game to North Clarion, are looking for their first D9 title.

Sommers netted a team-high 16 points for the Beavers who also got 15 from Felix.

DuBois, which had four players reach double digits, wasted little time putting the game away, as Sommers hit three first-quarter 3-pointers and scored 11 of his points in the opening eight minutes. That helped the Beavers to a 20-6 lead at the end of a quarter, and it was 36-14 by halftime with Sommers hitting another 3-pointer in the second quarter, Lennon Lindholm hitting two threes in the frame, and Chooch Husted scoring seven points in the quarter.

Lindholm added 12 points and Husted 11 for DuBois to give the Beavers four players in double figures.