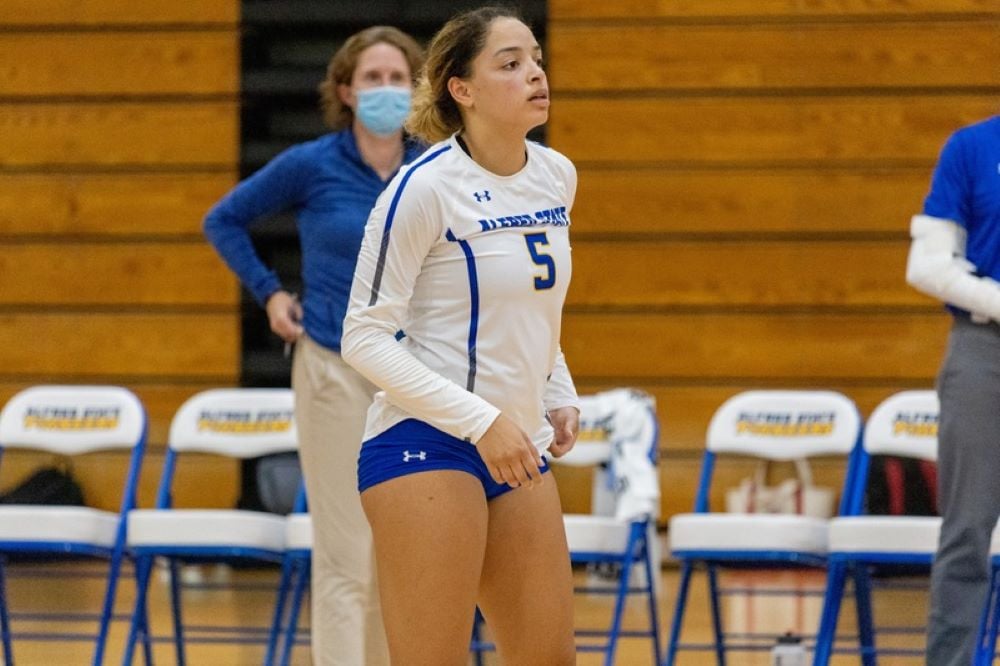 INDIANAPOLIS – Recent Westminster College graduate Megan Parker (Mercer/Track and Field) and Alfred State graduate Kiara Perkins (Coudersport/Volleyball) have been selected as nominees for the 2022 NCAA Woman of the Year award.

The Woman of the Year award, which is in its 32nd year, has honored the academic achievements, athletics excellence, community service, and leadership of outstanding female college athletes. As 2022 marks the 50th anniversary of Title IX, the NCAA Woman of the Year program is an important opportunity to honor and reflect on the impact of women on intercollegiate sports.

In 2021-22, Parker was the president of Westminster’s Student Government Association (SGA), serving as the official representative of the SGA to the Board of Trustees, the College administration, the faculty, the College community, and the public. She also served as a First-Year Orientation leader/coordinator, leading small group discussions with new students, assisting in the preparation of orientation activities and materials, explaining involvement opportunities and procedures, acquainting new students with campus services and building locations by conducting campus tours. In 2019-20 Parker was a member of the UPMC Jameson School of Nursing Student Leadership Council, a self-governing organization which helps to develop professional growth in all students, provide opportunities for self-directed leadership, develop social activities to foster congenial relationships among students and provide opportunities for student representation on school committees.

Parker was active with Westminster’s Black Student Union, a campus-based organization concerned with educating the College and community about issues (current and historical, local, national, and worldwide) regarding non-white ethnic backgrounds, and served as an advocate for the needs of students at the College, while empowering, teaching, discussing and exploring the Black experience and other minorities. She was also a student tutor with Westminster’s Department of Nursing.

Perkins, meanwhile, was a five-year member of the Pioneers, a four-year starting outside hitter, a team captain twice and voted team MVP twice.

Academically, Perkins received a bachelor’s degree in Human Services Management and an associate of applied science degree in Social Sciences. She was on the Deans List in 2019 and 2020.

Her civic engagements include participating in Pink Pride for four years, being a member of the Student Athlete Advisory Committee for two years and volunteering as a travel coach from 2017-2020.

“Kiara is an outstanding representative of Alfred State and the athletic department on the court, in the classroom and in the community,” said head volleyball coach Gene Doorley.

“Over her five years at Alfred State, Kiara has always set a great example of what it means to embrace the process and evolve as a student athlete. She worked very hard to become a great athlete, teammate, and student, taking advantage of opportunities on this campus and off. Kiara truly represents what committing to the process means. The result of consciously doing something each day that will add to your overall excellence.”

Next, conference-level nominations will be forwarded to the NCAA Woman of the Year Selection Committee, which will choose the top 10 honorees in each of the three NCAA divisions. The NCAA will announce the Top 30 honorees on ncaa.org in October.

From those 30 candidates, the selection committee will determine the top three finalists in each division. The NCAA Committee on Women’s Athletics will select the Woman of the Year from the nine finalists. The 2022 NCAA Woman of the Year will be announced during an award ceremony at the NCAA Convention in January.

Hickory Grad Evans Earns NCAA Division II Baseball Freshman of the Year Honors
Friedman Takes Fifth at USTAF Junior Olympics
This website or its third-party tools process personal data.In case of sale of your personal information, you may opt out by using the link Do not sell my personal information.
×
Manage consent