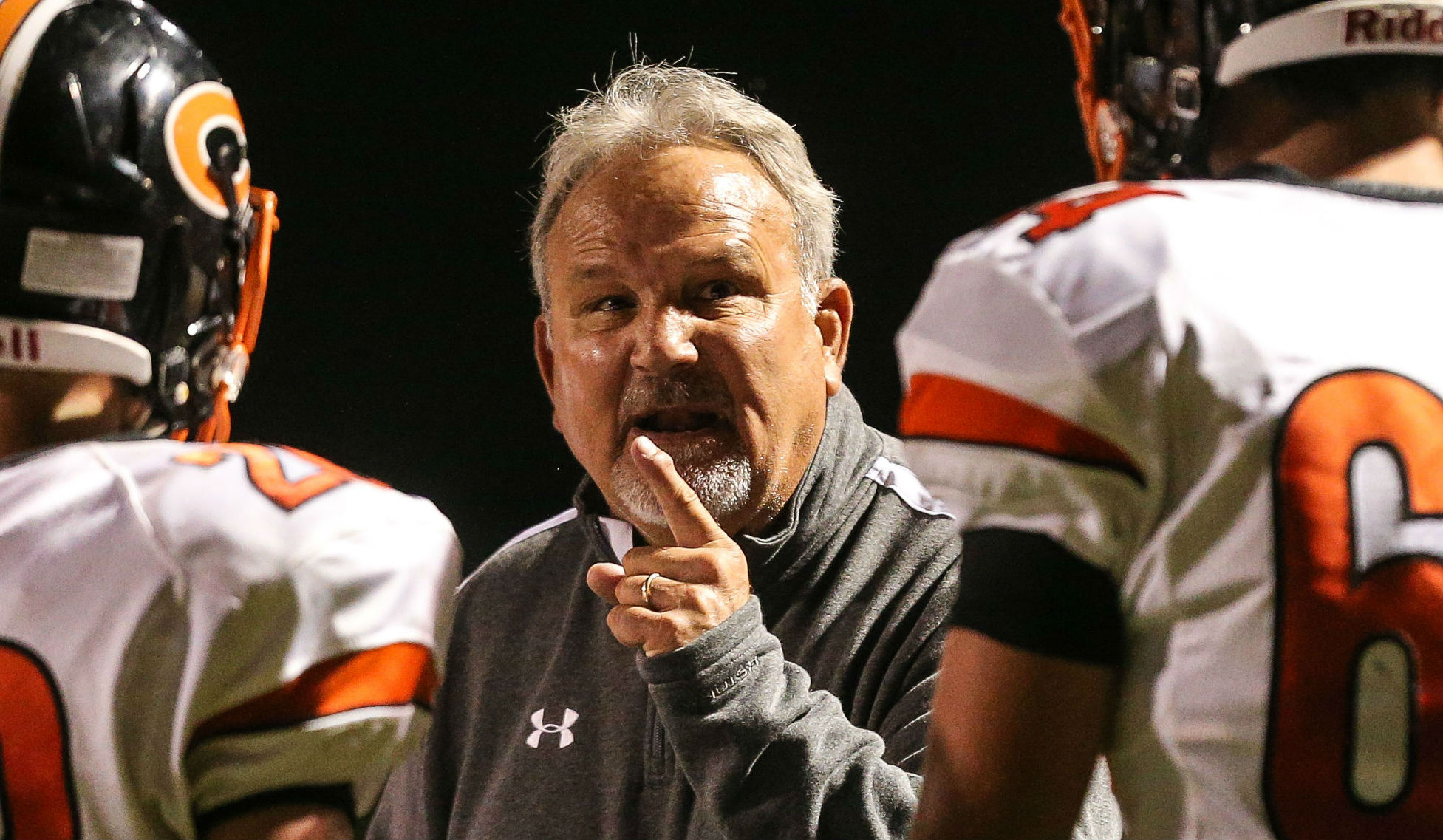 As I sit here on Thanksgiving night watching football, I wanted to take a moment to say thank you to a man that has meant so much to my career as a high school sports writer: Larry Wiser.

Wiser announced his retirement this week as head coach of the Central Clarion County Wildcats. This was the first year that the Clarion, Clarion-Limestone, North Clarion co-op went under that moniker. Prior to that, Wiser was as synonymous with Clarion Bobcats football as the orange and black uniforms.

It was the early 1970s when Wiser came to the school as a teacher and became an assistant football coach.

Then in 1988, WIser became the head coach of the Bobcats, a position he held for every year but one – 2010 when he stepped aside briefly because of a bum knee – over the last 33 seasons.

In his 32 years as the head coach of Clarion, Wiser won a beyond impressive 238 games – the second most in District 9 history behind only Clearfield’s Tim Janocko – and four D9 titles (three in 1A and one in 2A).

But beyond the wins, beyond the titles, there is the man, the mentor of young men. Larry Wiser is more impressive in both of those roles than anyone can imagine.

I can’t pinpoint the very first day I met Larry. I imagine it was sometime during the summer of 1998. I was fresh out of college, and my first job was as Sports Editor of the Clarion News.

Clarion was coming off the 1997 District 9 Class 1A title, the first D9 title in school history – District 9 didn’t start playing championship games until 1987 (Clarion lost the first 1A title game, 20-6, to Johnsonburg and had also lost 14-7 in overtime to rival C-L in 1990 before breaking through with the 7-3 win over perennial power Smethport in 1997).

The 1998 team wasn’t going to be one of Wiser’s best. The rebuilding Bobcats went 4-6 that season including a 53-14 defeat to Smethport in the District 9 1A semifinals (yes I made the long drive from Clarion to Smethport that night – my first foray into the northern part of District 9 not knowing that the long reaches of D9 would become something I would become intimately attached too in the coming years.

Not much stands out to me about that 1998 season except one particularly chilly late fall night in Brockway, Pa.

Clarion had just lost to the Rovers and another legendary coach, Ray Reckner, 49-21.

I remember walking off the field talking to Larry Wiser. We were headed towards the end zone on what is the locker room side of what is now Varischetti Field in Brockway back before there was turf on the field.

We were talking about the game. Some of the things that had happened in the game. And I remember Larry looking at me as we walked and pointedly saying “You can criticize me as much as you like, but don’t you ever criticize my players. They are only high school kids, kids who are 14 to 18 years old.”

But the advice Larry gave me that night, I have tried to carry through the last 22-plus years (23 years of covering high school football – man it’s hard to imagine that was nearly a quarter of a century ago). I haven’t always been perfect with it, but I have tried my best to stick by that advice.

And the reason is simple. It is sound advice.

These are teenagers playing a game – whether that be football, basketball, volleyball, soccer, tennis, whatever. We should all be doing our best to praise them when they do well and pick them up when they don’t. Again, I will be the first to admit that I haven’t always been perfect with this – so haters who want to pick out a time where I broke this rule feel free, I can live with that – but I have dedicated a career to promoting high school student-athletes – first in Clarion County, then in District 9, and now, this year, in District 10 as well. And a little part of me knows that Larry Wiser is one of the reasons I did that.

Over the years, Larry and I grew closer than just football coach and reporter. We became friends and in some ways even colleagues – there was a time after his long-time assistant coach and stat guy (and another all-around good guy Alex Arth) retired from doing stats that I took up the mantle and helped with the stats for Larry.

Even after leaving the Clarion News in the fall of 1999, I was around the program. First, as the “beat” writer on a stringing basis for the Tri-County Sunday our of DuBois (Thank you Rich Rhoades, Chuck Ferra, Scott Shingledecker for giving me that opportunity over the years), then in my position at exploreClarion before starting my own company this year.

I was there for the low moments for Coach Wiser and the Bobcats – a fumble at the end of the championship game against Cameron County in 1999 when the ‘Cats looked like they were about to tie the game, the devastating 23-0 loss to Curwensville in 2000 when Clarion was sure it was destined to win a state title come to mind first.

I was also there for the high moments.

The championship game win over Coudersport in 2009 that broke a string of four straight losses in D9 title games for Wiser and Clarion. I was also there for title game wins in 2013 over Redbank Valley and 2017 over Kane as well as a couple of other title game and playoff losses for the Bobcats.

But you know what never changed, win or lose?

He always praised the kids when they won and took the heat when they lost.

Over the years, he has good naturally taken the ribbing of his sometimes strange timeouts – I mean who takes a timeout on the opening second-half kickoff. We have lovingly termed those timeouts as Larry Wiser timeouts.

But the man also evolved as a football coach.

When I first met him, his teams rarely threw the football. The shotgun was something that was reserved for the pro of college game.

But over the years, as offenses evolved, so did Clarion’s.

But don’t be fooled by the modesty. If he hadn’t wanted to let the offense evolve, it wouldn’t have evolved.

But then that modesty is what makes Larry such a great guy.

When he announced his retirement this week, and I called him to congratulate him on a great career and to do a story, one of the first things he said was that he had no idea how many wins he had. Of course, he knew he had over 200 – there was a big celebration that night – but the exact number over 200? He had no idea.

That’s because it wasn’t the wins and losses that meant the most to him. It was seeing kids improve, kids believe in themselves, that he cherished most.

I will miss talking to Larry the football coach. I will miss our chats in the locker room prior to weekly previews or interviews – many times those talks had nothing to do with football but instead had to do with local events, regional events, national events, sometimes politics – after all, Larry did teach social studies and being the son of a social studies teacher with a degree in Political Science myself, I am always up for a good talk about what is going on locally, and nationally. Those talks didn’t happen this year because of COVID-19, and for that is sad. But perhaps, COVID was there to help transition me away from something I treasured so much.

I am just rambling here now. I apologize. I am going to end this. But not before I say one last thing.

Thank you, Larry. Thank you for taking a young, wet-behind-the-ears reporter and helping him grow over the years. Thank you for teaching me what it means to be a professional. Thank you for always being there win or lose knowing I had a job to do.

Thank you! And Congratulations!

District 9 and District 10 Week 12 Football Predictions
Humble And Hungry: Wilmington Meets Southern Columbia Once Again For Class 2A State Title
This website or its third-party tools process personal data.In case of sale of your personal information, you may opt out by using the link Do not sell my personal information.
×
Manage consent