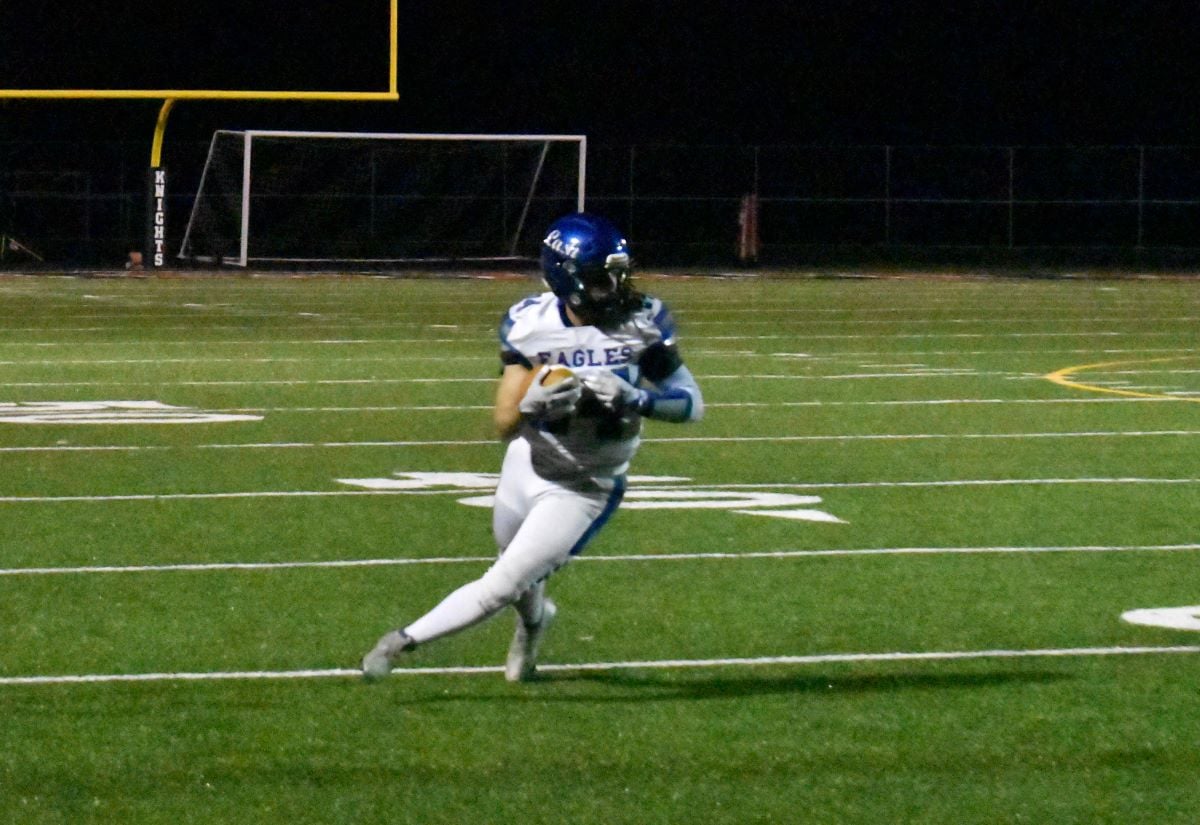 Franklin football coverage is brought to you by

FRANKLIN, Pa. – It’s been a long time coming for the Conneaut football program – over two years to be exact.

Thanks to a dominant defensive effort and a ball-control offense, the Eagles snapped their 19-game losing streak with a 14-10 win over Franklin.

“It feels really good,” said Conneaut’s Logan Groover, who finished with 26 carries for 150 yards and a touchdown. “This is my first win. I’m glad we were able to pull it out.”

It was also the first win for first-year CASH coach Josh Blood.

“This is CASH football putting its foot in the ground and heading north,” Blood said. “That was our rallying cry all week. These seniors, have one game with us left, but they’re going to propel us to bigger and better things in the future. We talk about it in practice all the time. We keep track of the days since. It’s been over two years. And this feels really good for our seniors especially.”

All of the points in the game were scored in the first half, but that doesn’t mean there wasn’t a good bit of drama in the second half, especially late.

With CASH (1-8) driving inside the Franklin 20, the Knights were able to pounce on a fumble at the 16 to get the ball back with just under five minutes to play.

Franklin (0-9) quarterback Hunter Marsteller, who came back in the game after briefly exiting due to injury, rolled out and hit Toby Sanchez who made a highlight-reel 20-yard catch on second down, and just like that the Knights were out to the 42.

After they got the ball to midfield, however, the CASH (1-8) defense dialed in, sacking Marsteller twice (two of six sacks in the game) to get a turnover on downs. The Eagles were then able to run out the clock.

“I’m extremely proud of these guys,” said Franklin coach Matt Turk. “They don’t give up. They have grit. We have a young football team. That catch by Toby Sanchez, he’s a sophomore. Darrius Graham, his first-night playing linebacker after coming over from the defensive line, he gets an interception.”

An early turnover set Franklin up with some great field position, and a completion from Marsteller to Cole Buckley set the Knights up with first and goal at the 10. The CASH defense stiffened, however, forcing a 29-yard field goal attempt, which Nate Pfennigwerth drilled to put Franklin up just 91 seconds into the game.

CASH responded, however, as Groover busted off runs of 29, 10, and 14 on a 77-yard drive that was ultimately capped off by an Ethan Stright 9-yard touchdown run with 3:03 to go in the first quarter.

“We were able to be what we’ve wanted to be all year, which was physical,” Blood said. “We’ve struggled with turning the ball over, but tonight, we were one mistake ahead.”

The Eagles put together another impressive drive to begin the second quarter, and this time it was Groover finishing it off with a 3-yard plunge up the middle.

Franklin’s Toby Sanchez hauls in a pass during the first half against Conneaut.

Franklin, meanwhile, was struggling to move the football, so they decided to dip into their bag of tricks and get the ball in the hands of one of their biggest playmakers – Buckley.

Buckley took a double reverse and showed off his speed down the sideline on a 68-yard touchdown run with 3:41 to go before halftime to get Franklin within four at 14-10.

“You saw what Cole Buckley can do,” Turk said. “We have some great things coming up. I feel bad for our seniors. We did our very best to get them the win here in their home stadium. I can’t say enough about these guys. They’re family and we’re very proud of them.”

Conneaut finished with 203 yards on the ground, while Marstellar had 103 yards passing, with Bryson Watson accounting for 36 receiving yards, Sanchez 27, Buckley 21, and Alex Wible 19.

“We’ve struggled in so many places,” Blood said. “We opened with a lot of seniors who had never played football before. We told them if they stick with us we’re going to get better and better and even the times when there are games we should have been competitive, they rolled into film and rolled into practice. This is a special group. Love these guys.”

Turk was equally proud of his team.

“We’re going to get in there on Monday and get back to work,” Turk said. “I thought our defense played very well.”