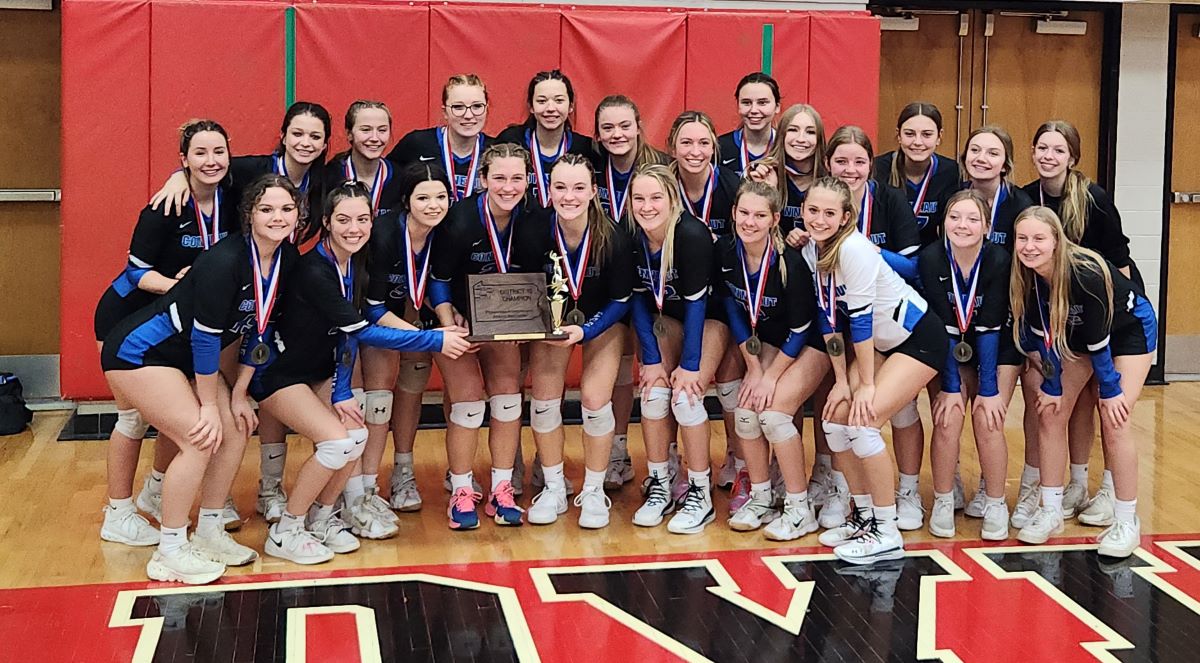 MEADVILLE, Pa. – Conneaut had not one but two comebacks for the ages in Saturday’s District 10 3A title match against Warren.

“It’s super special to know that since I was a freshman I’ve had the opportunity to be in D10 every year,” said CASH senior Kaylee Mattera, who had a team-high 16 kills to go along with 14 digs and four blocks. “To win it with this senior crew and everybody else, we’re super close and we’re all best friends, so it’s special.”

The comebacks were almost hard to fathom.

“I don’t think I can put it into words right now,” said Conneaut coach Christine Krankota said. “We came into tonight saying if we kept our composure, maintained our focus, and let it all out effort-wise it would give us a good chance. And all three of those things were needed.

“In a match of this intensity, with this much pressure, we just told them to chip away, one point at a time. It speaks volumes as far as their confidence and skill set. A team is a group of people, and the best teams are groups that trust one another. And you saw that tonight.”

Warren led 18-7 in the first after a kill from Kylie Fehlman when the first rally started. Syliva Prebor, Lainie Harrington, and Mattera all came up with huge kills during the run, while Ginger Woods was critical in the middle with a team-high eight blocks.

Conneaut took its first lead of the match, 19-18 on a Warren hitting error, and two kills from Mattera helped them to close out the set.

Conneaut comes back to win a wild first set, 25-23 pic.twitter.com/Ouk7QksKB6

“We just played like we know we can play and told ourselves that we can do it,” said junior libero Paris Karastury, who finished with a team-high 17 digs.

The same script played out in the second set.

This comeback from CASH was a little more methodical but had the same result.

Krankota credited the serving of Ashley Crabb in the first set and Barabas in the second as keys to the comebacks.

“Ashley Crabbe had a critical serving run in the first set and Ashley Barabas, same in the second,” Krankota said. “And Ginger Woods had some big blocks that allowed us to seize momentum back in our favor.

Warren still had command at 22-19 after a kill from Jones, but CASH rattled off the next four points, with Karastury notching an ace and Harrington a kill, as well as a Warren hitting error.

Warren’s Syliva Prebor goes up for an attack between Warren’s Maddy Jones (6) and Kirsten Johnson (22). Photo by Andy Close.

The Dragons got level at 23-all on a kill by Kirsten Johnson, but Conneaut closed it out on a pair of Waren hitting errors.

Undeterred, Warren battled back to take the third set, 28-26 to extend the match. It was Conneaut that actually led, 18-14, but Warren went on a 4-0 run to tie it up, ending with a kill from Beers. Both teams had chances to close out the set before a long rally ended with a kill from Jones to give the Dragons the set.

“If we close out either one of them (first or second set), maybe it’s a different story,” said Warren coach Mike Dolan. “We’re super proud of them. Maybe it helped to have to battle against Meadville and Cathedral Prep in the third game of both of those, we really had to battle. We could have folded, but they kept fighting. That is a really good CASH team. They are well-coached and play great defense.”

Leading 11-10 in the fourth set, Conneaut went on a 7-0 run to assume command and ultimately close out the Dragons.

Conneaut is your D10 3A volleyball champion! They win the fourth set 25-17 to beat Warren, 3-1. Fourth title in a row for CASH pic.twitter.com/w9ZpmanJgm

Krankota was equally complimentary of the way Warren fought.

“They’re a fantastic team,” Krankota said. “They’re disciplined, well-coached, and are very balanced offensively. We knew that it was going to be a tall task.”

Warren’s Alexia Bowers (14) goes up for an attack. Photo by Andy Close.

With the win, Conneaut moves on to play WPIAL runner-up South Fayette in the first round of the PIAA playoffs on Tuesday.

“There are so many emotions that are running through us,” Krankota said. “It’s very overwhelming and very humbling. It’s been amazing watching these seniors grow up right in front of us over the last four years. They have such a strong bond.”

Maplewood Turns in Flawless Effort to Beat Cochranton for D10 Class 1A Volleyball Championship
RUNNING TO GOLD: Prep Girls, Grove City Boys Claim PIAA Cross Country Team State Titles
This website or its third-party tools process personal data.In case of sale of your personal information, you may opt out by using the link Do not sell my personal information.
×
Manage consent