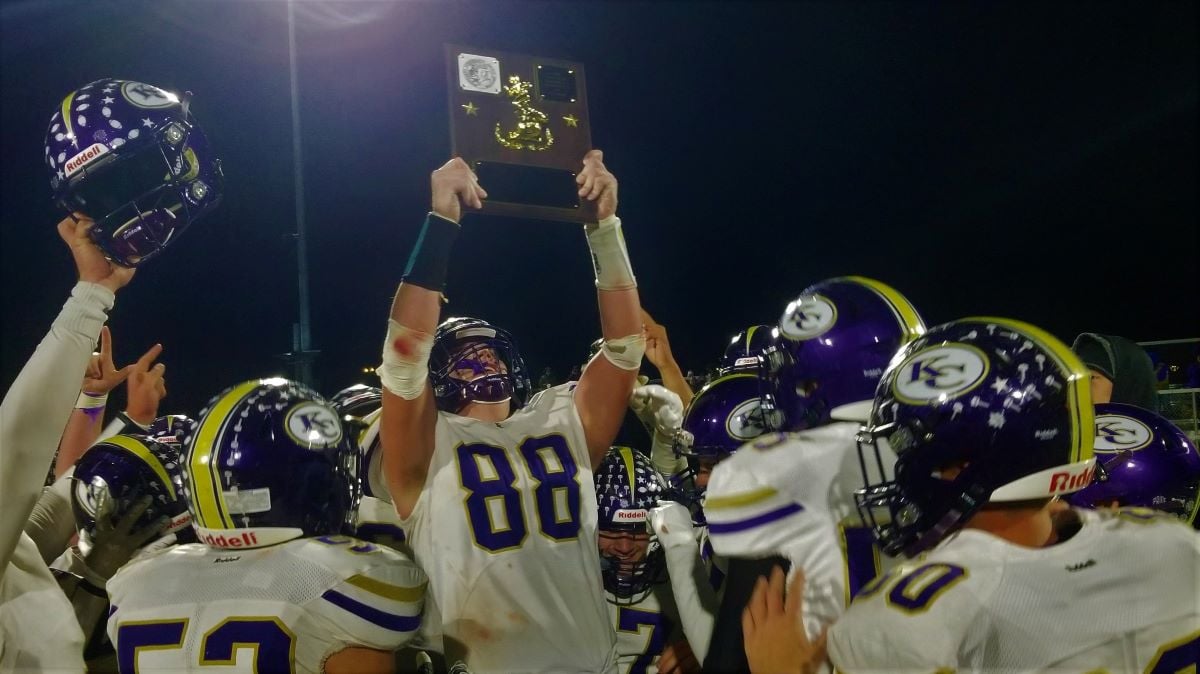 BROCKWAY, Pa. – Owen Colwell hit a 27-yard field goal with 4.7 seconds left to give Karns City the District 9 Class 2A title with a 16-14 win over Brookville at Varischetti Field in Brockway Friday night.

“Them calling time out at the end, pretty scary,” Colwell said of what was going through his mind before the game-winning kick.”I practiced those kicks before. I just did what I could do.”

Colwell’s kick came following a pair of timeouts, one by Karns City and then another by Brookville – the proverbial ice the kicker timeout. But it may have been that second time out that allowed Colwell to actually get warm as opposed to being iced, as he could be seen running up and down the Karns City sideline during the kick.

“With the weather, the temperature, my feet hurt so bad they were cold,” Colwell said. “I just had to warm them up a little bit on the sideline.”

Colwell’s game-winning kick came three players after fellow senior Kaden Scherer picked up the first down of his life on a 10-yard run with the Gremlins facing a fourth-and-3 (and their season) at the Brookville 22-yard line.

Scherer, who opened the scoring for Karns City with a 65-yard run in the first half, lined up in the wildcat formation and went around left end to get the first down.

“He’s a great athlete,” Karns City head coach Joe Sherwin said about the decision to line Scherer up in the wildcat on the play of the season up to that point. “In that situation, you want to get the ball to your great athletes. It doesn’t take a rocket scientist to know that.”

Sherwin said he didn’t really consider kicking the 39-yard field goal on the fourth-down play, even though Colwell said after the game he believed that would have been within his range, which he estimated to be between 40 and 45 “yardish”.

“We had the fourth down at the 22-yard line, and I felt that was a little too far for him,” Sherwin said. “That’s why we ended up going for that one. But once we got that first down that’s when I was thinking it was a field goal.”

A pair of Cole Coon runs set up what was a fairly straight-on shot for the left-footed Colwell, who split the uprights out of the hold of sophomore quarterback Eric Booher.

“This game meant everything to our seniors,” Colwell said. “(It’s) my first (championship) as a senior. (I had) two silvers as a soccer player in D9. This one means a lot to me.”

The game-winning field goal drive, which went from the Karns City 42-yard line to the Brookville 11-yard line and took up just under 5:44 on the game clock, was the epitome of what Karns City did all night on offense.

The Gremlins, in a sort of through back to the 1970s, line up and challenged Brookville to stop a simple up-the-middle running attack.

While the offensive line won the game in the end for Karns City, it wouldn’t have had a chance if the Gremlins defense hadn’t clamped down Brookville and the Raiders star quarterback Jack Krug, especially in the second half.

Karns City limited Brookville to 51 yards of offense in the second half and just four first downs on 24 plays. Twelve of those yards and one of the first downs came on the game’s final play when Krug was just running for his life trying to create a miracle.

For the game, Brookville was held to a season-low 218 yards, while Krug was limited to 20 of 31 passing for 164 yards, a touchdown (on a short screen pass that was turned into a 19-yard score by Robert Keth) and an interception. The Raiders came into the game averaging 453 yards per game including 327.9 passing (Brookville did play without 12 players including a couple of starters because of COVID-19 testing or contact tracing).

“Our defense the last two weeks has really come around,” Sherwin said. “We’ve gotten more used to playing a spread offense. You’ve got to give credit to Coach Wagner. The defensive game plan he put out there today, to hold them to 14 points that’s an incredible job.”

Karns City’s secondary blanketed the Brookville receivers all night long, and thanks in part to that, the Gremlins defensive line was able to harass Krug most of the night and sacked the record-setting quarterback five times.

“I can’t give up our secret,” Sherwin said. “We’re just mixing a little zone, mixing a little man together. We were just trying to keep them off-balance as much as possible.”

Two of the five sacks came at crucial moments of the game, including one by Zach Blair on a fourth-and-11 play midway through the fourth quarter that gave Karns City the ball back at its 42-yard line enabling it to go on the game-winning drive.

The other key sack came in the second quarter with Brookville up 6-0, and the Raiders driving at the Karns City 31-yard line.

On a third-and-10 play, Mason McNany strip-sacked Krug with Cole Hillard recovering at the Karns City 35-yard setting up the 65-yard Scherer run two plays later that declared the contest a ball game.

Another key defensive moment for Karns City came early in the fourth quarter after Scherer lost a fumble on a punt return – one of two lost fumbles out of five total fumbles by Karns City – giving Brookville, which led 14-13 at the time, a golden opportunity to add to the lead starting at the Karns City 29-yard line.

But after a pair of Keth runs picked up nine yards, Nathan Waltman, Karns City’s 6-5, 240-pound linebacker, took over.

First, Waltman blew through the line stopping Keth for a 2-yard loss on third down, and then on fourth-and-3 from the 22-yard line, Waltman and Coon stopped Keth for a yard loss.

“On third down, I just remember Nathan Waltman plowing in there and making a stop,” Sherwin said. “And on fourth down we had several guys on the ball there. That was a big, big momentum swing.”

The victory turned around a 44-0 loss at Brookville for Karns City in the regular season (Sept. 25).

“That first game, we were just out of sorts,” Sherwin said. “We just got behind that first game. Just got ourselves totally out of our game plan. We dropped our heads that game. It was just a bad, bad game all around.”

Karns City didn’t play a perfect game by any stretch Friday night either as evidence by the five fumbles, but what the Gremlins did do was run the football and control the clock racking up 241 yards on the ground after being limited to 53 yards rushing in the Sept. 25 game against Brookville.

“We ran the ball a lot more this game,” Sherwin said. “We felt we could do a lot better. The offensive line has improved as the season has gone on.”

Brookville struck first in the game on the 19-yard screen pass to Keck on a fourth-and-17 play. It was the second fourth-and-long the Raiders converted on the drive.

Down 6-0, though, Karns City took its first lead on the 65-yard jet sweep run by Scherer down the near sideline.

Brookville answered right back on the next drive on a 1-yard Keth touchdown run one play after Kyle MacBeth picked up 17 yards on a pass play that was almost a disaster for Brookville with MacBeth fumbling at the end of the pickup only to have the ball go out of bounds at the 1-yard line instead of through the end zone which would have given the ball back to Karns City.

The Raiders went for two and made it on a Keth run to go ahead 14-7.

Brookville took the 14-7 lead into halftime, but a strong punt return late in the third quarter by Schrerer set Karns City up at the Brookville 24-yard line.

The Gremlins needed just four plays to get within a point, 14-13, scoring on a 1-yard Luke Garing touchdown run.

But on the extra point try, Karns City lined up in the muddle huddle and tried a trick play that failed leaving Brookville still ahead, 14-13.

“It’s a play where if it is there, we have the option of going for it,” Sherwin said. “It just didn’t work out. Not what we wanted to do.”

Karns City, which won its 15th District 9 title and its seventh since 2012 but its first under Sherwin, who was the offensive coordinator the last time the Gremlins won a title in 2017 in Class 3A, as the head coach, will take on the winner of the District 10 Class 2A title game between Farrell and Wilmington in the first round of the PIAA playoffs. The Farrell/Wilmington game is set for 7 p.m. Saturday at Wilmington. Under PIAA COVID-19 rules, the Karns City/Farrel or Wilmington game will be played at the home stadium of the District 10 champion.

District 9 and District 10 Football Live Scoreboard – Week 8 2020
Rewatch the Instant Classic Between Eisenhower and West Middlesex Won by Eisenhower in Double OT
This website or its third-party tools process personal data.In case of sale of your personal information, you may opt out by using the link Do not sell my personal information.
×
Manage consent